The Philadelphia Eagles played another bad football game, collecting their fourth straight loss in the process, and falling to 3-8-1. But at least we'll have stuff to talk about this week, so that's... something?

Well, it finally happened. Doug Pederson benched Carson Wentz, and with good cause!

Wentz finished 6 for 15 for 79 yards, with 41 of those yards coming on a pass that was woefully short to a completely uncovered Dallas Goedert. Instead of that play resulting in a touchdown or at least a much longer gain, that drive instead ended with a punt.

Wentz was also sacked four times, one of which knocked the Eagles out of field goal ra... You know what? Blah blah blah. No need to do a recap of Wentz's poor play, like we've done after almost every other game this year.

It just wasn't working with Wentz, and hasn't all season long. It was an overdue move that is best for the team, the fans that are still watching these games, and Wentz himself.

In his postgame press conference, Doug Pederson said that he needed some time before he decided on who would start at quarterback next week against the New Orleans Saints, but it feels like an extremely easy call to let Wentz take a break and step away from the field for a bit, possibly for the rest of the season.

Hurts inherited a 20-point deficit, and while his numbers weren't great (5 of 12 for 109 yards, 1 TD, 1 INT, and a 67.7 QB rating), he at least provided a spark, which is more than can be said of Wentz and the Eagles' broken offense over the last month. Hurts made a beautiful throw down the sideline to Jalen Reagor (we'll get to that in a minute), and he hit Greg Ward for a TD after sliding out of the pocket and throwing on the run.

Well done. Hurts should be the starter going forward. The Eagles are dying a slow death with Wentz at the helm, and they should at least see what they have in Hurts the rest of the way.

Jalen Reagor did some things on Sunday! He had a punt return touchdown, he caught a deep ball down the sideline, and he had an 11 yard run on a jet sweep. On the catch down the sidelines, he won the hand fighting battle, he tracked the ball, and made a nice catch.

On the punt return, he gave the Eagles their only memorable special teams play (memorable in a good way, that is) of the season.

On the glass full full front, there's something to be encouraged about. On the pessimistic front, it's all the more maddening that the Eagles have been manufacturing touches for Greg Ward all season instead of Reagor.

4) The 'WHY IS ALSHON JEFFERY STILL PLAYING?!?' Award: Doug Pederson

There's no reasonable explanation for why Alshon Jeffery continues to suit up on Sunday, much less take snaps away from the most productive receiver on the team in Travis Fulgham.

On the season, in four games played, Jeffery has been targeted eight times. He has two catches for 15 yards. There are at least two drops in there, an INT, and an offensive pass interference call.

He is so obviously cooked that even Tony Romo was acknowledging during the telecast that he doesn't look right. Kindly, Romo blamed it on his foot injury.

The Eagles are playing 10 on 11 when he's in the game, and he was in the game a lot on Sunday.

Oh and by the way, side note: Zach Ertz didn't exactly make his return to the field known today.

Darius Slay has, for the most part, had a good season covering opposing teams' No. 1 receiver, but he has struggled the last two games against a pair of elite players in DK Metcalf (10-177) and Davante Adams (10-121-2). Not all of those were against Slay, but he struggled while dealing with a calf injury, which caused him to leave the game early.

Opposite Slay, Avonte Maddox had yet another rough day covering whoever was left over. He too left early with an injury.

Cornerback is a big need this offseason, as always.

6) The 'It Was Bound To Fail' Award: The Eagles' defense

The defense in general played well the last two weeks against the Browns and Seahawks, but it was really only a matter of time before they started to give up a ton of yards and points as a result of the offense's inability to do anything.

The Birds' defense could be in for another rough game next week against the Saints.

7) The 'Give Up' Award: Doug Pederson

In the waning seconds of the first half, Wentz ran on 3rd and 16, and was tackled in bounds at the Eagles' 44 yard line. Rather than call a timeout and try a Hail Mary with one second left, the Eagles were content to get off the field and into the locker room.

I mean it's not like the Eagles got a TD on a Hail Mary a week ago or something.

In terms of the outcome of this game, that's probably a minor quibble, but I think it's emblematic of a bigger point, which is that the Eagles are now guided by fear of what can go wrong, instead of aggressively attacking every possible scenario.

It's not going to get better anytime soon. The Eagles have two more highly likely losses upcoming against the Saints and Cardinals, before they finish out the season against the Cowboys and Football Team. If the Eagles lose both of their next two games, and the Giants win either of their next two games, the Eagles will be mathematically eliminated before they face their final two weaker opponents, which, really, is for the best.

9) The 'Widening That Gap' Award: The Giants

The Giants upset the Seahawks on Sunday(!), with Colt McCoy at quarterback, no less, thus extending their NFC East lead over the Eagles (and the rest of the teams in the division). The Eagles are now 1.5 games behind the Giants.

With the Eagles' loss and the Giants' win, fivethirtyeight.com has the Giants with a 68 percent likelihood of winning the NFC East, with the Eagles down to 8 percent.

Their odds of winning the NFC East, according to TheLines.com, are way down to +900.

The best thing that can happen the rest of this season is for the Eagles to lose their remaining games, have Jeffrey Lurie see the light and move on from Howie Roseman, and get the highest draft pick possible. Having the Giants unexpectedly win in Seattle furthers that cause.

10) The 'No Help' Award: The Eagles' draft positioning 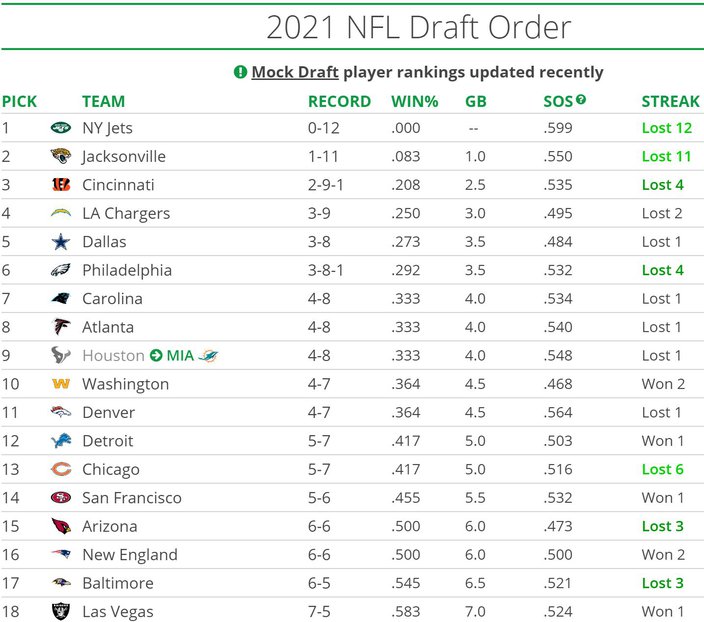 Should the Cowboys beat the Ravens on Tuesday night, the Eagles would move into the fifth spot. Embrace the tank, friends.