Eagles' Jalen Hurts shows he can play, but will he start the rest of the way? 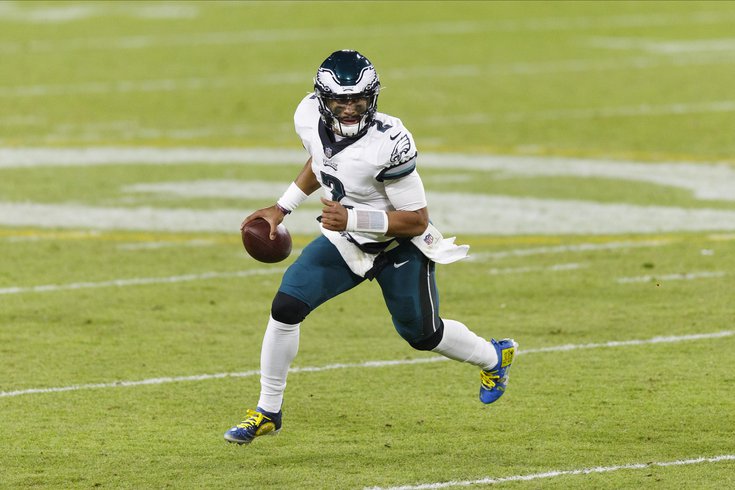 Philadelphia Eagles quarterback Jalen Hurts (2) scrambles with the football during the fourth quarter against the Green Bay Packers.

It was 6:16 p.m. (Eastern Standard Time) when the Eagles finally crossed the Rubicon and trotted rookie quarterback Jalen Hurts out to run the Philadelphia offense for the first time ever.

Sure, the second-round pick was on the field for more than two dozen trick plays earlier this season, wherein he had 12 carries, a catch and a completion, but Hurts hadn't been on the field for an entire series during a football game since he laid an egg in an ugly performance against LSU to end his college career a little less than a year ago.

Without any kind of preseason, and with the Eagles stringently holding out hope that their franchise quarterback Carson Wentz would somehow right himself and keep this team in contention in the dreadful NFC East, Hurts was a gadget guy and held a clipboard.

That was, until the third quarter in Sunday's 30-16 Week 13 loss to the Packers. The Eagles pulled the trigger on Hurts, and it would be hard to justify going back. Get ready for a fun week of Philly sports talk radio.

"I didn't know what the plan was fully," Wentz said. "I was just told he was going in for the next play, the next series. Obviously it's frustrating as a competitor, the personality I have, I want to be the guy out there and it is what it is, they made the call today and at the end of the day we lost. For me that's what I am most frustrated about. I don't like where we are at this season record-wise. I know I can play a lot better."

Hurts entered the game and immediately brought with him a spark and excess of energy. He looked comfortable behind center. He looked agile, versatile and much more aware of the pocket around him than Wentz was. And he also showed he has an arm.

Jalen Hurts with an absolute dime👀pic.twitter.com/vJmqvDLjvZ

This play is noteworthy for a lot of reasons.

But we are burying the lead.

In his second possession leading the Eagles' offense, after scrambling for two first downs, Hurts got the Eagles closer to the end zone then they had been all game long. But also found himself facing a fourth-and-18 after an Alshon Jeffery penalty. (Just why the heck Alshon is even on the field is the subject for another article.) And he didn't disappoint.

Remember when Wentz used to do that kind of thing?

"It was great, on the bright side of things I am not going to be 'Debbie Downer' right now," Hurts said when asked about his first career scoring toss. "It was a blessing a great feeling to throw a touchdown pass to my good friend Greg Ward, my first one, it was fun."

Hurts threw for 109 yards and the score and ran for 29 yards on five attempts. He also threw a garbage time interception. Are these eye popping numbers? No. Are they something to work with? The Eagles better hope so.

The emergence of Hurts as a serviceable at worst, and delightfully exciting at best, NFL quarterback likely makes for more new questions than it answers (and one of them comes with a gigantic cap hit), but it does give Eagles fans and front office members a monumentally important piece of useful information as they turn their attention to 2021 and decide how to spend what will mostly likely be a top 10 draft pick five months from now.

Hurts resembled a young Wentz, perhaps a bit faster, as he showed he could scramble better than Wentz ever could. He was seen darting away from collapsing pockets in contrast to Wentz, who tried to roll around but often would up rolling into defenders while trying to create offense.

With the offensive line as putridly terrible as it is (they allowed 50 sacks in the 12 and a half games before Hurts took over) perhaps having Hurts running the offense will give the Eagles the ability to move the ball better in the weeks to come.

Hurts only plays one position, but his impact was on all three phases as special teams (punt return TD, more on that in a second) and defensive players (who held Aaron Rodgers to back-to-back three and outs late) upped their game to close a 23-3 deficit to just seven points outside five minutes to play in the fourth. Of course, a 77-yard touchdown run from Aaron Jones nixed the Eagles' third try at a three-and-out and ice the game.

Are we in the midst of a full fledged quarterback controversy? Hurts played well and definitely showed he was worthy of more playing time — especially with the Giants now a full 1.5 games ahead in the NFC East. But he didn't play so well that it is impossible for Wentz to make a case to keep playing. At the very least, Pederson did the best he could to avoid give any kind of read to the media.

More importantly, what will happen in 2021?

With the Eagles staring at the best draft pick and worst salary cap situation they've had in years, it's not too early to turn the page and start thinking about the best way forward for a team flailing just three years after being Super Bowl champions.