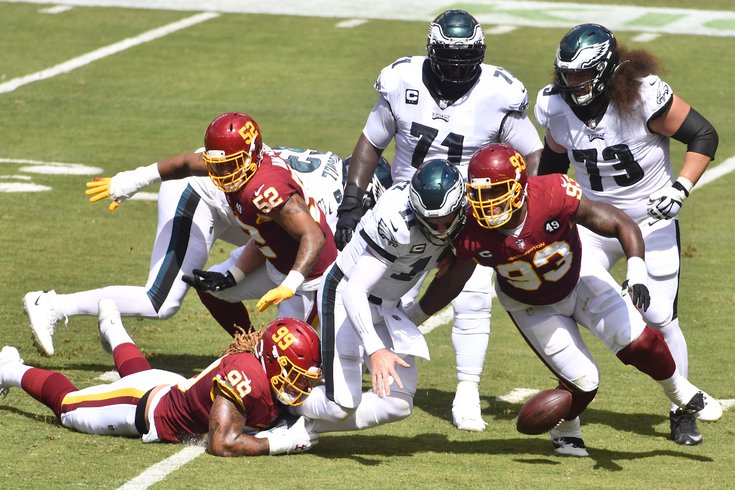 This about sums up the Eagles' Week 1 performance.

Here's where people around the country have the Eagles ranked after their embarrassing Week 1 loss to the Washington Football Team. (Oh, and here's our version of these sellout rankings, too.)

Reagor broke loose for a 55-yard completion early in the game, showing the speed and explosiveness that made Philadelphia want to select him in the first round. That was his only catch of the day on four targets, though he likely would have added a 75-yard touchdown if another Carson Wentz offering was a couple of yards shorter. A promising debut all in all, especially given that Reagor was playing through a small tear in his left shoulder.

#JimmySays: ESPN's blurbs are about which rookies had the best debuts for each team, hence the absence of any mention of the Eagles-Football Team debacle on Sunday.

The opener played out like a slow-motion car crash. What started as a pleasant Sunday drive (17-0 lead) turned into a tangled mess of steel for the Eagles (27-17 loss), who have to be wondering -- respect to John Madden -- "Where'd that truck come from?" That 18-wheeler was the Washington pass rush, which trampled Carson Wentz for eight sacks and forced the quarterback into a host of ill-advised passes. (Wentz threw two picks and easily could have tossed five). Not every team has a front-seven push like Washington, but the Eagles have every reason to worry right now.

#JimmySays: And next up... Aaron Donald!

The Eagles suffered one of Week 1’s most disappointing losses, given the combination of their preseason expectations (particularly at this very website), their opponent and the size of the lead they blew. With four of their next five games against the Rams, 49ers, Steelers and Ravens, they’ll need to get healthy and/or figure things out with a patchwork offensive line or else they may find themselves trying to dig out of a hole like they did down the stretch last season.

#JimmySays: You all realize where this is all headed, right? The Eagles are going to be bad for most of the season, but the rest of the craptastic NFC East will lose a ton of games as well, and keep them in the race. It's going to be that season. Again.

The Eagles were so beat up at running back, wide receiver and the offensive line that it’s hard to evaluate them after one week. No matter the injuries, it’s not good to blow a 17-0 lead to a Washington team expected to be one of the NFL’s worst. A Week 2 home game against the Rams takes on a lot more importance than it should for Philly.

#JimmySays: I would add the defensive line to the "beat up" positional groups, and subtract the receivers, but the overall point is taken. I believe the big concern after a loss like this is how badly Carson Wentz played.

Blowing a 17-point lead to the Redskins has to sting. Carson Wentz has to take care of the ball better - no matter who is playing around him.

#JimmySays: In addition to the bad INTs on Sunday, Wentz had two fumbles, making it 50 for his career.

The Philadelphia Eagles headed to Washington on Sunday with a team that has already been ravaged by injuries. Heading into the game, they were down three starting offensive linemen, one of their starting wide receivers and their starting running back.

Despite all those injuries, the Eagles raced out to a 17-0 lead. It looked like they were going to weather the storm and get a win in Week 1.

That is, until Washington peeled off 27 unanswered points.

"Yes, it's just one game, but it was one game against a bad Washington team," Davenport said. "The Eagles are in trouble. The linebackers in Philly are bad. The secondary might be worse. The offensive line is a mess, allowing eight sacks in Week 1. And if Carson Wentz keeps taking a beating like that, it's only a matter of time until he goes down, too. I'm not saying the Eagles should panic. Actually... yes, I am."

#JimmySays: The secondary was fine. Not sure why they're getting lumped in here.

Somehow managed to snatch defeat from the jaws of victory at Washington, a defeat that could very well haunt Philly remainder of season.

#PettyJimmySays: The lone power ranking here that put the Football Team ahead of the Eagles.