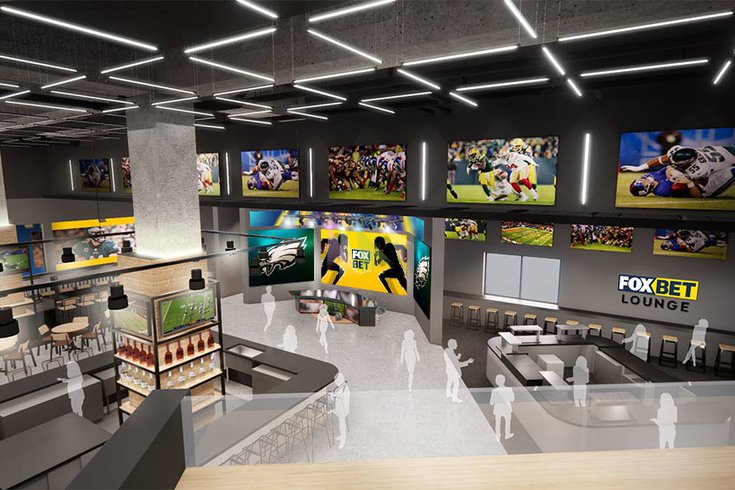 The 4,000-square-foot Fox Bet Lounge, which will be open to ticketed fans on game days, will be located on the service level of the Linc adjacent to the player parking lot and locker rooms. (For creative purposes only, subject to change.)

A premium, brand-new sports lounge and studio at Lincoln Financial Field are just some of the amenities that fans will have access to once they are able to return to for games after FOX Bet became the official gambling sponsors of the Eagles on Tuesday.

The 4,000-square-foot FOX Bet Lounge, which will be open to ticketed fans on game days, will be located on the service level of the Linc adjacent to the player parking lot and locker rooms. The interactive venue, which will be able to accommodate up to 380 fans at a time, will open two and a half hours before kickoff and close an hour after the game ends.

All-inclusive food and beverage options, as well as behind-the-scenes premium access and locations to watch player arrivals and live post-game press conferences, will be made available to fans. The lounge will also have a FOX Bet "interactive activation room" featuring wall-to-wall TV monitors and sports lounge seating.

Another amenity that will be available to fans is the development of a studio at the Linc, where both the Eagles and FOX Bet will produce exclusive content across multiple platforms. The programs will feature Eagles on-air personalities and well-known players, as well as guest appearances from FOX Bet contributors.

FOX Bet will also serve as the presenting sponsor of a new program airing on the team’s digital channels following all Eagles games. The series will be filmed on home game days.

The partnership deal will also include broadcast, digital, and social media advertising on team channels, custom promotions, and a branding presence on game days. It will also consist of FOX Bet messaging on the stadium’s LED and end zone boards, as well as signage on the concourse levels.

Along with being awarded the naming rights to the new premium lounge and media studio at Lincoln Financial Field, FOX Bet will become an official partner of the Eagles and sponsor of the Eagles Tailgate Crew.

The purpose of the multi-year sponsorship deal is to create an “immersive fan experience” that will entertain the Philly faithful “in an unprecedented way.”

“This new, fully integrated partnership with FOX Bet has enabled us to reimagine the way we deliver content to our fans in a fun and innovative way,” said Catherine Carlson, who serves as Senior Vice President of Revenue and Strategy for the Eagles.

“Every week during the NFL season, this new interactive studio will bring Eagles fans closer to the game through exclusive access and interviews, football commentary from some of the biggest on-air FOX Sports personalities, and many other surprises along the way. We look forward to growing our partnership with FOX Bet, an industry leader that continues to expand its footprint in the Philadelphia market.”

“FOX Bet enhances the fan experience in a big way, and this is a fanbase that knows and appreciates big things,” said Andrew Schneider, who serves as Chief Marketing Officer at FOX Bet.

“They’re passionate, tough and willing to do whatever it takes to win. To connect our offering to this one-of-a-kind fanbase is a game-changer. Eagles fans are going to love this, and we’re honored to have this association with a team that is primed for a successful 2020 season.”