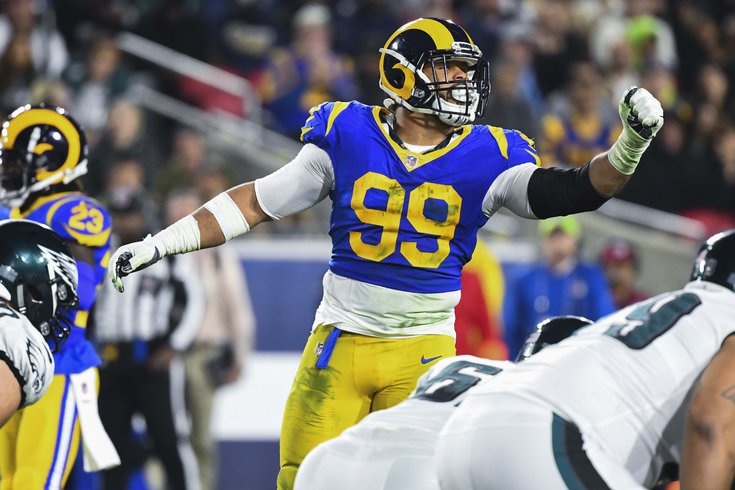 The Philadelphia Eagles will attempt to rebound from a dreadful Week 1 performance against the Washington Football Team, when they take on the Los Angeles Rams this Sunday in their home opener. Currently, the Birds are 1.5-point underdogs, according to consensus odds at TheLines.com, after opening as 2.5-point favorites.

1) The Eagles' run defense vs. Malcolm Brown and the Rams rushing attack

While taking in the Rams-Cowboys game Sunday night, one of the players I enjoyed watching was hard-charging running back Malcolm Brown, who gives the Rams offense a physical identity. The Rams ran it 40 times in that game, vs. just 31 pass attempts for Jared Goff. Brown got 18 carries, with rookie Cam Akers getting 14.

"They're committed to the run," Jim Schwartz said on Tuesday. "I think they always have been going back with Todd Gurley. They just leaned on him. They have a different cast of characters now, but it really hasn't changed their philosophy.

"If you don't stop the run, they're going to keep on running it. They controlled that game on Sunday with about 150 yards rushing, all those attempts. I think a lot of that is in our hands. They're going to stay committed, but how committed they are is really going to depend on how well we're doing against it. If we're doing a good job on that, and also in conjunction with that not giving up big plays down the field.

"It's easy to sell out on the run, but at what expense? Do you give up big plays down the field as a result? That's not a good formula either, so we have to balance both of those. If we're doing a good job stopping the run, I think that can sort of change their opinion of it a little bit."

Brown isn't going to rip off many huge runs, but he takes what's there, he'll get you first downs in short yardage, and he's a physical finisher. Here's his game from Sunday vs. the Cowboys.

When the Rams have the run game going and they can stay on schedule, Jared Goff becomes a better quarterback, as the Rams' play action looks are more effective, and Goff isn't asked to convert third and long situations. Schwartz cited Goff's ability to get out of the pocket.

"One of the things I'd probably say that really stood out more when we started watching him was his increased mobility," Schwartz said. "They're using a lot more bootleg passes. He's not just easing into those. Sort of in years past he would run the boot, but he was just really sort of buying time to find guys that were open. Now he's getting up on the boot and he is sprinting full speed, really putting a lot of pressure on the width of your defense.

"I think that's probably the biggest change. He's an outstanding play-action passer, always has been. That's been a big thing. He really executes those fakes really well. It makes it difficult on the defense if they're looking at the wrong thing. They look at him, you're not going to be able to tell the difference between run, boot and play-action."

Ultimately, that all starts with the run game.

In the past, the Eagles have typically done a good job on physical, but athletically-limited runners like Brown. It's crucial that they continue to do so in this matchup, because the Rams offense becomes much more difficult to stop when they're running it well.

The bet here is that on plays in which the Eagles have Darius Slay follow a specific receiver, that receiver will be the underrated Robert Woods, who has racked up 176 catches for 2,353 yards the last two seasons.

But I think the more interesting matchup will be between Robey-Coleman and Kupp, who is one of the best (if not the best) slot receivers in the game. In 2019, Kupp had 94 catches for 1161 yards and 10 TDs.

Kupp isn't a blazer by any stretch, but he is an outstanding route runner, and he's dangerous after the catch because he can break tackles. A look at his highlights from the 2019 season:

The Eagles have sort of an oddball group at corner, in that they have one true outside corner who can also play the slot) in Slay, while Robey-Coleman, Avonte Maddox, and Cre'Von LeBlanc are all slot corners, who aren't perfect fits on the outside. In that respect, maybe they're well equipped to handle teams with good slot receivers? Does that logic make sense?

The weak link along the Rams offensive line is Noteboom, their starter at LG. Noteboom played 79 snaps as a rookie in 2018, and 376 snaps in 2019, when he played in 6 games at LG (starting all 6). Noteboom allowed the Cowboys' lone sack of Goff in Week 1.

Watching live, Eagles defensive tackles Fletcher Cox and Malik Jackson didn't seem to generate much pressure, but on the re-watch, they were much more disruptive than the stat sheet would indicate.

This is a matchup that they should be able to take advantage of.

You knew we were going to get to this one, obviously. Donald is the best defensive player in football, and whoever is No. 2 on the list isn't really all that close, in my view. Over his last 33 games (2018-present), Donald has 34 sacks (more than one per game), six forced fumbles, 46 tackles for loss (he led the NFL in that category in both 2018 and 2019), and 69 QB hits. He has put up those numbers, despite constant double teams.

If Lane Johnson returns to RT this week, it is to be determined who will play RG for the Eagles. Nate Herbig started there Sunday, but Jack Driscoll could potentially slide inside after starting at RT in his rookie debut.

In my view, the biggest issue with Wentz's Week 1 performance was that he tried to do way too much instead of letting the game come to him. His attempts to extend plays that just weren't there led to some sacks that could have been avoided, and his over-aggressiveness with the ball when the team had a 17-0 lead led to the INT that completely changed the game.

The Eagles have a bunch of injuries, but this isn't the last quarter of the 2019 season, when Wentz had to carry a bunch of practice squad guys to victories. He still has a healthy DeSean Jackson, an exciting rookie in Jalen Reagor, a great 1-2 TE combo in Zach Ertz and Dallas Goedert, and maybe at some point an explosive runner in Miles Sanders.

There's no need to try to be Superman in these games this early in the season. He needs to settle in, relax, play smarter, and realize that he has help.