Handing out 10 awards from the Eagles-Seahawks playoff game 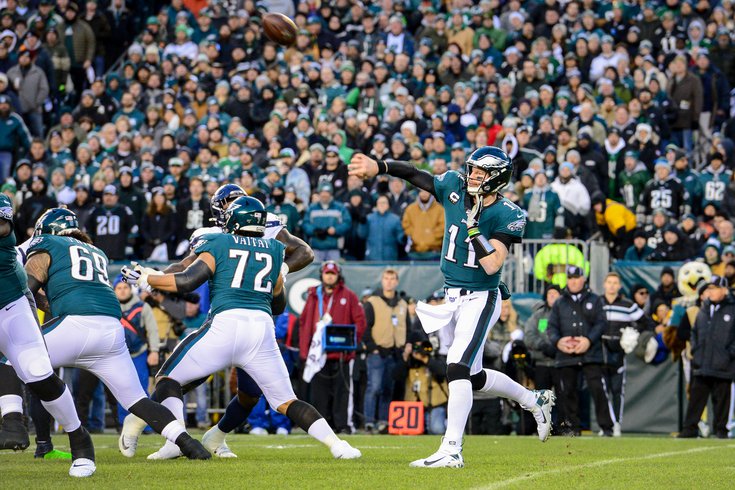 The Philadelphia Eagles' 2019 season is over after suffering a frustrating 17-9 loss to the Seattle Seahawks, which happened to be the exact same score of the Eagles' loss to Seattle Week 12. But that's hardly the story here.

This game was really over before it barely got underway, after Seahawks DE Jadeveon Clowney clearly intended to injure Carson Wentz. And he did, as Wentz was forced to leave the game with a concussion. Of course, as you all saw, Clowney was not flagged on the play. Here's the slow-mo shot:

Here's the regular speed, "play on the field" shot, where Wentz gives himself up, and you can basically see the moment Clowney decides he's going to try to injure Wentz, and then does so:

Wentz dives forward on this play against the Seahawks and takes a helmet-to-helmet shot to the back of the head from Clowney. There’s no call because refs said he didn’t give himself up. #Eagles

And here's one last angle:

Head referee Shawn Smith was asked after the game why Clowney wasn't flagged. His response:

"He was a runner and he did not give himself up. We saw incidental helmet contact, and in our judgment, we didn't rule that to be a foul."

What an absolutely garbage explanation on so many levels. Roger Goodell was in attendance for this game, and he should suspend Clowney for that hit, but the guess here is that Clowney will avoid harsh discipline. I would expect a slap on the wrist, at best, and wouldn't be surprised if there was no punishment at all, as a punishment would require the NFL to take accountability for a player obviously trying to injure a quarterback, concussing him, and not even getting flagged for it.

The Eagles scratched and clawed their way into the playoffs, winning four straight games with a skeleton crew on offense, and in a blink, on the actions of an obviously dirty play, it was over.

The Eagles probably weren't legitimate Super Bowl contenders, but the biggest benefit of making it into the playoffs was that Wentz would get a playoff game under his belt, and that didn't really even happen. He finished 1/4 for 3 yards, and a concussion. This Seahawks team wasn't good, and the biggest reason they won, quite simply, was because of a unquestionably bush league cheap shot.

2) The 'OH DEAR LORD THE TAKES ARE GOING TO BE MINDNUMBINGLY AWFUL' Award: Blithering idiots

Sam Monson, you are a blithering idiot.

Like everyone on the roster is busted up and I didn't automatically expect the one guy made of sugar glass to follow suit.

Brandon Stokley, you are blithering idiot.

Carson Wentz hurt again. He’s just way to unreliable to be a franchise QB but the Eagles have no other choice now. Should’ve kept Foles he was a perfect fit for them #Eagles

Orlando Scandrick, you're unemployed, and you're embarrassingly terrible on TV.

And Josina Anderson, this tweet undermines your credibility as a reporter who should be taken seriously.

Oh what's that? You meant that to be a positive message?

There is still hope & time for the #Eagles. McCown will give it all he has. Really unfortunate that Carson Wentz wasn't called off the field sooner after his hit, especially at a game the Commissioner is attending. He's had to endure a lot, as inferred earlier. https://t.co/TfGWdQzI9v

Seemingly every week this year, the Eagles suffered a new batch of injuries, which we detailed in stick figure form (up until Week 9 -- we'll update that soon). That also happened in 2018, and even in the Eagles' Super Bowl season in 2017. And yet, the Eagles battled through them, and still made the playoffs, albeit the last two seasons with a somewhat mediocre 9-7 record.

Still, the Eagles need to figure out why this theme has continued, because three straight years of this has to be more than just a crazy coincidence. Do they need to get younger? Buy some more foam rollers? Fire their medical staff into the sun? All options should be on the table.

Late in the fourth quarter, on a key fourth down, Doug Pederson made the correct decision to go for it on 4th and 4 with his team down 8 points, and he called a play that would have worked if the Eagles had executed.  However, Josh McCown threw it a touch behind Miles Sanders, who should have caught it anyway, but could not bring it in.

Miles Sanders with a HUGE DROP on 4th down... 😱#SEAvsPHI pic.twitter.com/2RBDbyAJkk

Drops probably cost the Eagles games against the Falcons and Lions, and maybe the Patri*ts. While I wouldn't put this drop in that same bucket, it was obviously very costly.

However, #UnlikeAgholor, Sanders has a bright future with the Eagles.

Seahawks receiver DK Metcalf smoked Avonte Maddox down the field for a TD.

THERE IS NO WAY TO GUARD THIS MAN @dkm14 pic.twitter.com/I2h7EFnZCu

And he ended the game with a great catch way down the field, and let the Philly faithful know it:

That was really the perfect end to this season. During the regular season, the Eagles allowed 15 pass plays of 40 or more yards. Only one team, the Raiders (16), allowed more. On Sunday, the Eagles allowed those two plays above to Metcalf, as well as another 38-yarder to David Moore that led to a TD.

After DeSean Jackson got hurt in Week 1 and (essentially) missed the rest of the season, the Eagles' really had nothing in the way of a deep threat down the field.

They had to sustain long, plodding, 10-plus play drives that ate up a lot of clock and required a bunch of third down conversions. They made it work at times, mostly because Carson Wentz is so good. It was not sustainable, and in the playoffs, the slow, plodding offense came to a grinding halt.

The Eagles' "practice squad all-star" receivers combined for 4 catches for 29 yards. Second round pick J.J. Arcega-Whiteside, who was selected seven spots ahead of Metcalf, was shut out. They just simply didn't have the firepower.

7) The 'Not Such An Advantage After All' Award: The trenches

The defensive line got some pressure in this matchup, but far too often Russell Wilson was able to evade the pass rush and make crucial plays, especially on third down.

The offensive line, meanwhile, gave up 7 sacks, with plenty of blame to go around there. The Eagles needed to dominate in the trenches, especially after losing Wentz, and they did not.

The one notable exception that we'll make here is that Fletcher Cox played a hell of a game, and looked like the elite player he once was. That is at least an encouraging development heading into the offseason.

8) The 'Nemesis (or Nemsises, or Nesmesi?)' Award: The Seahawks (and Saints too, I suppose)

This is pretty self-explanatory, right? The Seahawks and Saints own the Eagles, and they also happen to be the last two teams to eliminate them from the playoffs. The Eagles will get another crack at them both at home in 2020.

9) The 'Last Dance?' Award: A bunch of Eagles veterans

There are a lot of Eagles who may have played their last games as Eagles. Darren Sproles said he is retiring. Beyond him, a lot of familiar faces could be gone in 2020. Jason Peters? Alshon Jeffery? Malcolm Jenkins? Rodney McLeod? Nigel Bradham? Vinny Curry? Jalen Mills? Ronald Darby? Jordan Howard? Kamu Grugier-Hill?

The front office has a lot to figure out.

10) The Silver Lining Award: Wentz, Pederson, and the team's resiliency

This Eagles entered the 2019 season as Super Bowl contenders, and then they weren't, and then they made the best of a roster that should have never had a chance to legitimately compete for a Super Bowl. In that sense, this season was both a disappointment, and a success. Does that make sense? Yes? No? Whatever.

Wentz became more of a leader, Pederson kept his team competing, and the rest of the roster battled through injuries and never quit, when they had ample opportunities.