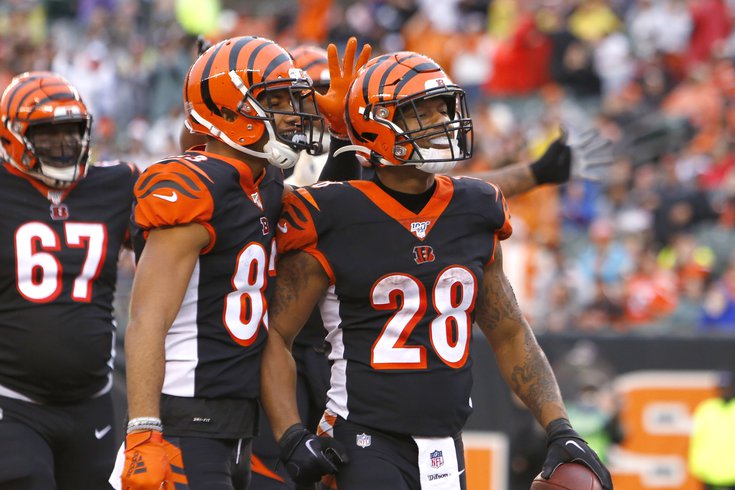 The Bengals have a pair of good, young players in Tyler Boyd and Joe Mixon.

The 0-2 Cincinnati Bengals will visit the 0-2 Eagles this Sunday in Philadelphia, so hey(!) both teams can't lose. 🎉

Currently, the Birds are 5.5-point favorites, according to consensus odds at TheLines.com. Here are our five matchups to watch.

1) The Eagles' rushing attack vs. the Bengals' run defense

When you're 0-2 and your offense is struggling to get its act together in the passing game, one way to get jump-started is to lean on the ground game until things start clicking, and the Bengals are an ideal opponent for that. In 2019, they were one of the worst teams in the NFL against the run:

In 2020, they haven't been any better so far, as they have allowed 370 rushing yards (185 per game) on 5.0 yards per carry. They have also allowed 4 runs of 20+ yards and 4 TDs (most in the NFL in both categories). Their tackling was brutal last Thursday night against the Browns. A sampling:

The Eagles' offensive line has done a reasonably good job opening up holes in the run game, and there's an argument that Miles Sanders left some meat on the bone Week 2, while he knocked off some of the rust. It's easy to imagine Sanders and the Eagles' run game being the focal point of the offense this week.

During the offseason, the Bengals signed Trae Waynes to a three-year deal worth $42 million this offseason. Waynes tore a pectoral muscle, and while there's a chance he could return this season, he'll be unavailable this Sunday. In the meantime, third-year CB Darius Phillips has filled in for Waynes.

Phillips is an interesting player, in that he has been productive when he has gotten opportunities to play, but his measurables aren't exactly ideal.

Phillips is 5'10, and he ran a 4.54 40 at the 2018 Combine. Not great. However, he only played 109 defensive snaps last season, and he had 4 INTs(!) and 7 PBUs. That production was also evident when he was a prospect entering the NFL. In his last three years in college at Western Michigan, Phillips had 12 picks (5 pick-sixes), 35 PBUs, 4 forced fumbles, 3 fumble recoveries, and a fumble recovery TD. He is a legitimate playmaker.

In Week 1, Carson Wentz connected on a bomb to Jalen Reagor. It might have been two bombs if Reagor hadn't slowed up on a route. The Eagles did not chuck anything deep down the field Week 2, as the Rams made it an emphasis to take that away.

Despite his obvious ball skills, Phillips would still be the corner I would look to target deep down the field with the Eagles' speed on the outside in Reagor and DeSean Jackson, should they get one-on-one matchups, as that is where Phillips can be a liability. For example, Week 17 last year vs. the Browns, Phillips is No. 24 at the bottom of the screen (To note, he'll wear No. 23 on Sunday):

And again in the same game, this time, top of the screen:

The Bengals' top two receivers are A.J. Green and Tyler Boyd. While Green certainly has more name recognition, the feeling here is that Boyd is the better player at this point in the two players' careers. Boyd has outproduced Green so far this season, despite significantly fewer targets:

As such, it might make more sense have Darius Slay follow Boyd, when the Eagles opt to do that. The argument against that approach is that Green is 6'4, 210, and would have a major size advantage over Maddox, who is only 5'9.

The guess here is that Slay will follow Green because of his size, however, Boyd is still a bigger receiver in his own right, at 6'2, 203. No matter what, the Bengals are going to have a size advantage somewhere.

The Eagles have the one of worst red zone defenses in the NFL after two games, allowing 7 of 9 opponent trips into the red zone to go for touchdowns. Jim Schwartz attributed that to the team's struggles against the run.

"We have a very good track record of being good in the red zone. The field is short. It's hard to throw the ball into some of those windows. We do a good job of closing those down, matching up the pick routes. Haven't been picked down there much.

"I think probably the biggest thing is leaking too much in the run game. We've had the ball run across our goal line way too much. Defenses take pride in a lot of things, but number one is their physicality and getting runs stopped.

"If we can stop the run, it allows a lot of those other things to play. We definitely have to get back on track with our red zone defense. You guys know, I don't really care about a lot of stats, I care about points allowed, takeaways, red zone third down, and stopping the run in order to have that physicality and being able to control the game.

The Eagles allowed 191 yards on the ground to a bunch of no-name guys last Sunday. This Sunday they'll face a good young back in Joe Mixon, who can run inside, run outside, and catch the ball out of the backfield.

The Bengals are 0-2, but Burrow has not looked like a rookie, despite the shortened offseason that Doug Pederson bemoaned on Monday.

• In the fourth quarter Week 1 against a talented Chargers team, Burrow led a 14-play drive, culminating in a touchdown throw to A.J. Green that was negated by an offensive pass interference call. With only seconds left, the Bengals sent kicker Randy Bullock out to send the game to OT on a 31-yard field goal attempt, with he missed (and badly, at that).

• In Week 2, Burrow threw for over 300 yards and 3 TDs while putting 30 points on the board, but the Bengals' defense stunk and they just got outscored.

Despite the bad start in the standings, it seems clear that Burrow's teammates believe in him, and they will not be an easy out.

Last year, the Eagles faced two rookie quarterbacks. The did a nice job against Daniel Jones, but Dwayne Haskins had his best game of the season against them.

"The biggest thing now that you see from him is just the progression," Jalen Mills said of Burrow on Tuesday. "And it’s actually really good, knowing that he didn’t have OTAs in the offseason, where you see during the offseason, quarterbacks go out of town, they get to throw with their receivers and things like that. You see him at the line making checks … as a rookie, that’s very, very impressive. Also, he’s moving out of simple sacks that you see, younger quarterbacks not moving their feet or they don’t have awareness, and guys are grabbing them and pulling them to the ground. So I think the biggest thing for me, watching him on film, is his pocket awareness and actually making checks at the line of scrimmage."

Surprisingly, Burrow doesn't even wear a play call wristband. No matter how smart Burrow may be, on paper, "rookie playing his third NFL game" vs. "coach who is in his 20th season as either a defensive coordinator or a head coach, and into his fifth year as the defensive coordinator with his current team" should favor the latter.

Schwartz acknowledged that he had a bad game plan last week against the Rams, and while it's admirable for him to take that accountability, he can't have two duds in a row.