What was it like photographing an Eagles game, with no fans, during a pandemic?

On March 10th, I was covering a Flyers game, like I had done hundreds of times, enjoying having the best job in the world.

But then my life, like most people's at the beginning of 2020, came to a screeching halt as the COVID-19 pandemic reached the east coast. I had no idea I'd be stuck at home for the next six-plus months.

In my eight years as a professional sports photographer, I've seen lockouts postpone games, but never anything like this. Sunday's Eagles game against the Rams was my first time working a sporting event since March.

It was surreal, to say the least. 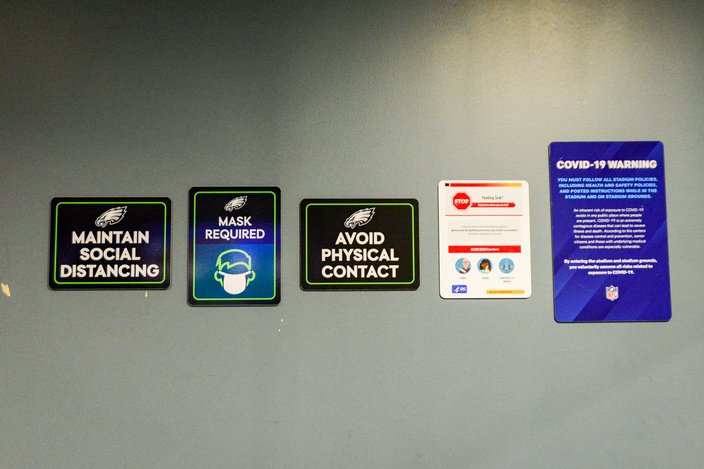 When you’re a photographer who primarily covers a small number of teams in your area, a part of your work routine is familiar. Having covered mostly Philadelphia pro sports, I have a strong sense of place in buildings such as the Wells Fargo Center and Lincoln Financial Field. I knew walking into the game yesterday that experience would be shaken up by COVID-19 protocols. However, I must say that I was thoroughly impressed with the Eagles’ handling of pandemic safety.

My safety was the last thing on my mind thanks to that. What was on the forefront was navigating the different regulations put in place to protect myself and the players and staff. There were things that I took for granted pre-COVID.

You can’t tell, but I’m so happy to be working a sporting event. I wasn’t sure if it would happen again in 2020. pic.twitter.com/U2SseMKsbo

The underbelly of the Linc is designed extremely well in terms of accessibility. The photographer’s workroom that I’m accustomed to using is across the hallway from the locker room, which leads right out to the tunnel taking you out onto the field. All I have to do is go out the door, turn right, and I am in the tunnel. There was an ease of running into the workroom to edit photos during halftime and then run back out.

For this new, weird season, the media workroom is located further away from the tunnel in the underbelly of the stadium. No photographers have field access this season, so it’s not as much of a problem, but having to run up and down a couple sets of stairs just to get to a shooting position took away precious editing time. 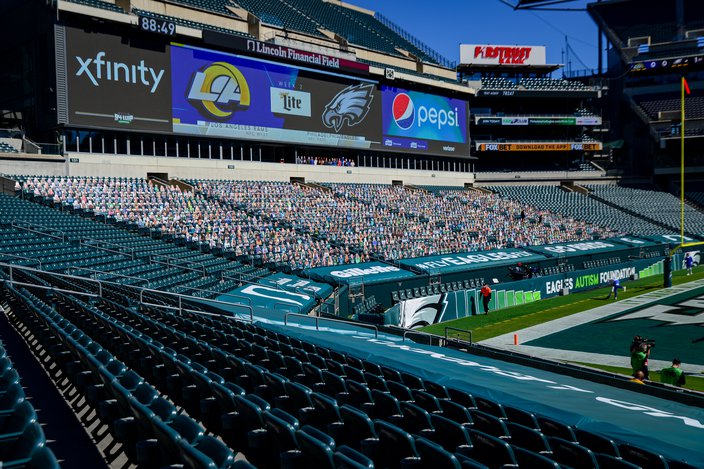 Not having field access means that photographers have to shoot from the same zones of the field, but from the lower bowl. Shooting from an elevated position posed an interesting challenge, but with the ability to capture most of the plays. There are a lot more blind spots near the field because of players lined up on the sidelines blocking a third of the field.

I don’t even want to know how many stairs I climbed Sunday, navigating the 100 level trying to get the right positions. This brings me to my next point: travel time between positions.

Have you ever noticed photographers and cameramen running up and down the field to capture play? That’s what a majority of us do in order to cover as many plays as possible. Throw stairs and social distancing into the mix, and it’s much harder to move around to cover the game properly. I’m used to being hip to hip with photographers, cameramen and ball boys running up and down as play happens.

The way that I approach my sports photography is from a fan's perspective. I grew up watching the sports and teams that I cover. Having special access as a fan, I like to capture images that I think other fans would enjoy seeing. That's something that I feed off of while working is fans.

One of the eeriest moments of the game yesterday was being in an empty stadium and hearing simulated fan sounds played over the sound system. Not hearing fans singing along to the Eagles fight song felt plain weird and like I was in some weird version of The Twilight Zone (or Black Mirror for you younger readers). There was no one in the outer concourse areas and merchandise and food stands were empty. It was a fifth dimension.

There were some positive aspects to covering the game from the lower bowl, though. I was able to capture some nice portraits of Eagles leaving the field after the game that were pretty much head on. Normally I don’t have much room to position myself as I’m sandwiched in with other photographers who often block my view. I plopped myself down right by the tunnel and crouched down to be eye level. The result was some of my favorite football portraits I’ve ever taken.

I must say that driving to the game with zero traffic felt like it was too good to be true. It took me only five minutes to exit I-95 and park my car in the media parking lot. There were also no drunken tailgaters to weave through to get to the media entrance.

I did miss that in a sense, though. There’s never a dull Eagles tailgate experience (if you know what I mean).

At the end of the day, it felt like I had worked a game in a dream state. Seeing no fans was weird. Not being on the field was weird. Arriving and leaving with no traffic was awesome. Being able to capture the game from a new angle was a struggle, but awesome in the sense of having a challenge. 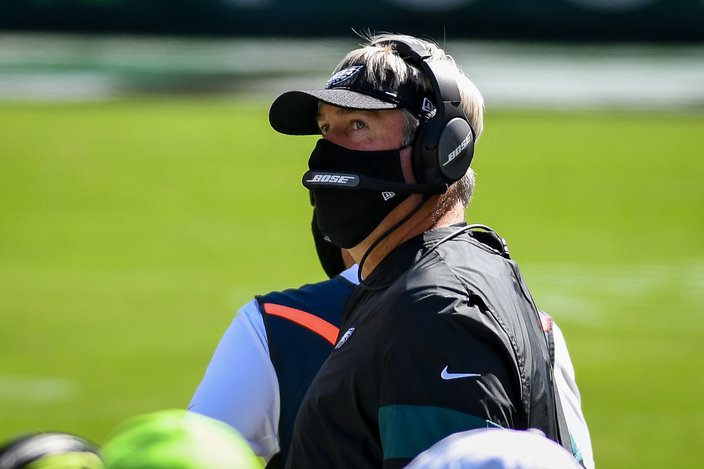 Doug Pederson during the Philadelphia Eagles game against the LA Rams at Lincoln Financial Field in Philadelphia on September 20, 2020.

Here are some more photos from in and around The Linc on Sunday: 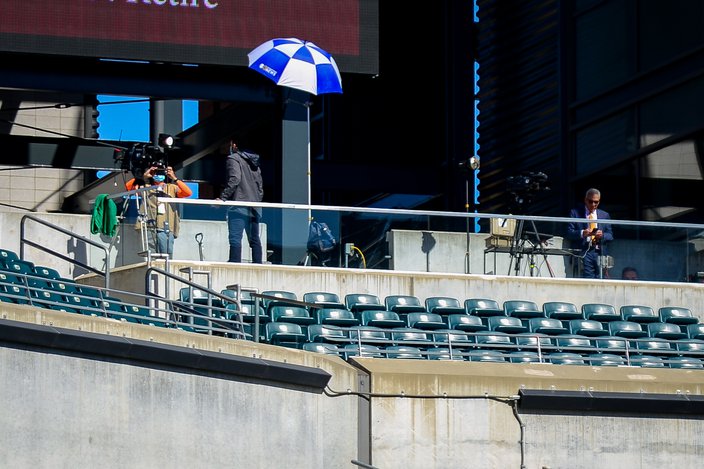 TV crews in the stands during the Philadelphia Eagles game against the LA Rams at Lincoln Financial Field in Philadelphia on September 20, 2020. 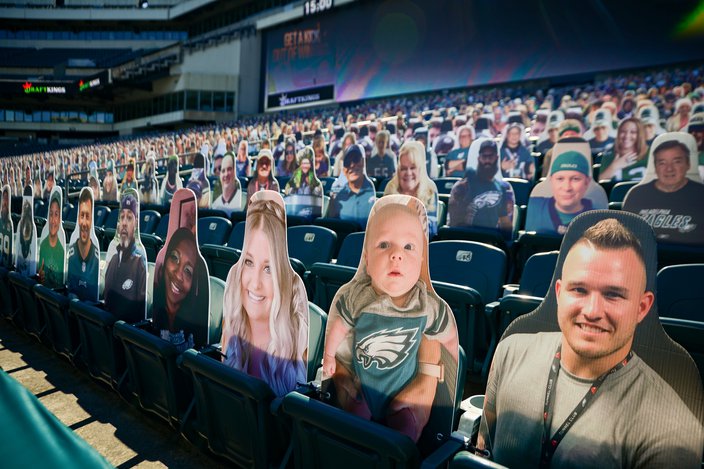 K'Von Wallace warming up before the Philadelphia Eagles game against the LA Rams at Lincoln Financial Field in Philadelphia on September 20, 2020.

Kate Frese is an internationally-published sports photographer based in the tri-state area and has been freelancing for PhillyVoice since 2019 covering the NHL, NFL and NBA. Her work can be seen on her website  (katefrese.com). You can follow her on Twitter here: @KateFresePhoto and Instagram here: @kate_frese