In blowout loss to the Rams, TV viewers were given a virtual chorus of disapproval 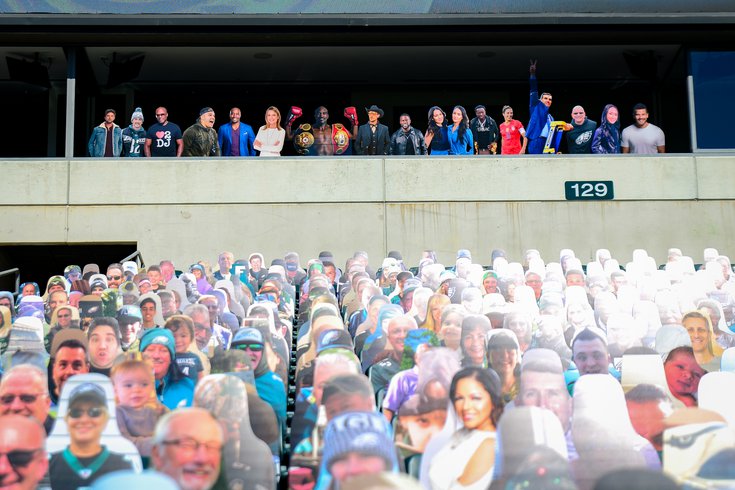 At least the Eagles picked the right season to be awful, since cardboard doesn't boo.

Early in the second half of the Eagles' demoralizing 37-19 loss to the L.A. Rams on Sunday, it appeared as if Carson Wentz might lead the team on an improbable comeback.

On first-and-10, just outside the red zone, Wentz forced the ball into double coverage and got picked off in the end zone, killing the drive and the team's momentum.

Eagles fans at home were serenaded with boos on the FOX broadcast, one of several instances of loud disapproval during Sunday's game.

Wentz booed off the field again by fake digital fans in Philly after throwing INT pic.twitter.com/FXQFgaMICP

Since the end of the game, there's been some debate as to whether those boos were heard by the team at the empty Lincoln Financial Field.

In true Eagles fashion, AT A PHILLY HOME GAME, the audio crowd control guy queued up some boos for Carson Wentz when they turned the ball over.

LMFAO that’s so fucking savage oh my god. Even without fans he gets booed. That’s the covid silver lining I was looking for there

Only in Philly would cardboard fans boo the Eagles.

Did fake fans just boo the eagles offense off the field? If so, very realistic.

Are the Eagles getting boo’d with no fans in the stands?

In what was otherwise a miserable game to watch, the boos were a nice touch. But they were only heard by TV viewers, according to Sports Illustrated.

The NFL's in-game audio at empty stadiums doesn't work the same way as the MLB's broadcast protocol, which actually picks up fake crowd noise played on the speakers at the ballpark and includes it in the broadcast.

All NFL teams have been given an identical, looped audio file of crowd noise to be played at stadiums where fans aren't admitted because of the COVID-19 pandemic. Depending on the situation in the game, the volume can be cranked up to 70 decibels, but the track is required to be played any time the game clock is running.

While some of that stadium noise may be picked up by TV broadcasts, the networks are able to layer their own studio-generated crowd noise on top of it.

In other words, the boos heard on Sunday were the work of FOX engineers who recognize the signatures of a game at Lincoln Financial Field — specifically, a game in which the Eagles play like crap.

Next weekend's game, also at the Linc, will be broadcast by CBS. Maybe they'll have a different take on virtual Philadelphia's reactions to the Eagles.