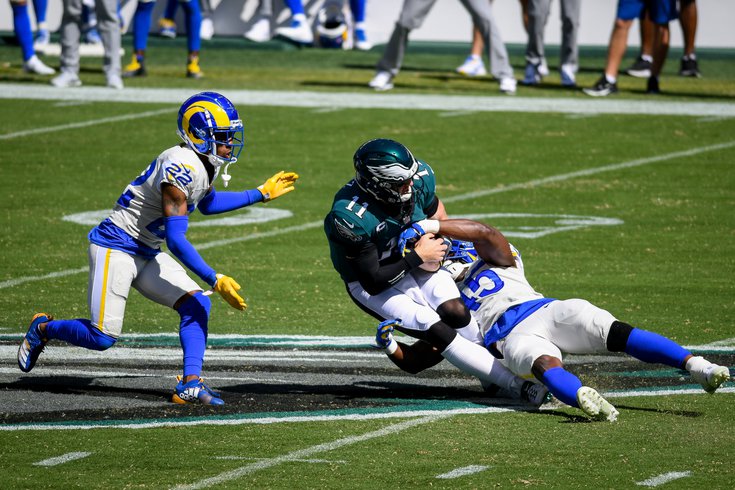 Carson Wentz is sacked during the first half against the Rams.

The Eagles got beaten and bruised by the L.A. Rams in Week Two, and their 37-19 loss will inspire questions about how far away they are from the season going truly off of the rails. With Carson Wentz and the defense playing like this, they're headed nowhere fast.

• Not sure how well he's going to hold up in pass protection, but man, Nate Herbig just absolutely mauled in the run game against the Rams. The Eagles had a ton of success running the ball through the right side of the line, with Herbig and Lane Johnson combining to create big holes for Miles Sanders and (occasionally) Boston Scott to burst through.

The offensive line was once again one of the biggest stories heading into the game. After getting shredded by Football Team in Week 1, you would have been forgiven for thinking Aaron Donald would have a field day against Philly. To their credit, and in spite of losing Issac Seumalo to injury in the middle of the game, the boys in the trenches rose to the occasion and played a much better 60 minutes on Sunday.

Sanders deserves his own share of the credit for a rejuvenated rushing attack for Philadelphia. The Eagles were both unwilling and unable to get going on the ground against Washington in Week 1, and after an early Sanders fumble, it looked like they might fall into the same trap. To Doug Pederson's credit, he didn't go away from Sanders, who ran with pace and power to give Philadelphia a multi-dimensional attack.

Once this team gets the ground game rolling, it makes the offense that much more dangerous. Teams actually have to respect your play-action fakes, instead of ignoring them to bullrush the quarterback. The combination of a more threatening run game and better protection gave Wentz had a heck of a lot more time to make decisions from the pocket, which would have been great had he made use of it.

• We are in year five of the Carson Wentz experience. At this point, it should probably be accepted that the ups and downs, the inconsistency, the peaks and valleys are just who he is. The eureka moment may never come. We're past the point where we should expect to see a dramatic leap forward or a material change in who he is. He's a great talent, but he isn't a great quarterback.

With the Eagles grinding out an excellent drive to start the second half, both sides of Wentz were on display. A series of third-down conversions on money throws was bookended by a misthrow on a screen pass to DeSean Jackson and an absolutely baffling interception in the endzone, a throw he tried to force into double coverage to JJ Arcega-Whiteside. Arcega-Whiteside hasn't produced enough to warrant forcing balls into him against single coverage, let alone when the window never existed and your offense is moving the ball down the field with ease.

Carson Wentz tries to force the touchdown and gets intercepted. pic.twitter.com/Zh3wCL4Fv9

The context has changed around Wentz a ton throughout the last half-decade. At times, we have blamed the offensive line, the team's speed, his return from injury, his inexperience, or some combination of all of those factors. There's always a reason to push his mistakes and faults to the side, perhaps because his early tape (and near-MVP campaign) convinced everyone he was going to continue trending upward and stand alongside the game's elite. Even his throwaways, which people were begging to see after last week's game, came on plays where it looked like he missed open receivers for potential touchdowns. He makes every type of mistake you can afford your QB to make.

And now he's being paid as one of the league's elite while delivering results and performances that remain the same. It creates a tough situation for the Eagles — do you double down on that investment and try to boost the talent around your guy on offense? That's been the mentality so far, and they're admittedly getting nice production out of guys like Miles Sanders and Jalen Reagor, but it leaves them with holes on defense and still lacking the explosive offense you'd hope to have with a "franchise" quarterback.

He is not the only problem with this team. But many of Philadelphia's problems flow from here, and you simply will not win at a high level if your expensive quarterback doesn't deliver top-tier performances. He is not even within shouting distance of that level right now.

They quite literally cannot afford for him to play like this. If Wentz is not much better, they are sunk.

• If we're looking for a position group disappointing on the same level as Wentz, I look at the defensive front first and foremost. We're all well aware of Philadelphia's weaknesses throughout the rest of their defense: they have one legitimately good corner, a safety who transitioned to the position because he's too slow to play corner, and a linebacking core that is the epitome of a group you're "just trying to get by" with.

Those excuses aren't on the table for a group featuring guys like Fletcher Cox, Brandon Graham, Malik Jackson, Derek Barnett, and keep going down the list. The Eagles (like many other teams around the league) have constantly poured resources into the offensive line. Hell, the Eagles traded a fourth-round pick in next year's draft for Genard Avery, who didn't even dress for the game on Sunday.

If the defense is going to come out of the winning end of matchups, the defensive line needs to be elite. They are nowhere close. They were gashed by a team that lost their starting running back in the first quarter, and they let Jared Goff operate under little duress for most of the afternoon.

Each member of the defensive line has proven capable of standout individual games, but rarely do those performances come at the same time, and rarely are they able to dictate the terms of the game as a unit, at least not against good teams.

• While we're on the subject of people who looked overmatched, Nathan Gerry got taken to the woodshed by Tyler Higbee in Week 2. He's supposed to be the best they have to offer at the linebacker position, and you most often see him on your screen when he's several yards behind the guy he's covering, desperately hoping he can chase them down.

With the way the NFL's salary cap works, you're always going to have to pick a position group or two where you're light on investment. It's not crazy to de-emphasize linebackers relative to other positions. But to do it to the point the Eagles have, and to roll with a group that pretty obviously is out of their depth? It looked like a huge concern coming into the season, and it's being realized one game at a time.

• Should we pin the secondary's problems on the scheme having them play far off of the line of scrimmage, or on their incompetence as a position group? Both feels like an acceptable answer to me.

• What's the subtext of all of the above? Howie Roseman has not done a good enough job of building a football team. They have good, not great pieces across both the offensive and defensive units, but few (perhaps none) you would consider game-changing players. When you invest premium resources on players who only turn out to be good, not great (and in many cases much worse), it necessitates greater mastery of the later rounds, the free-agent bargain bin, and the moves around the margins to be a good team.

The Eagles have failed miserably in that department since their magical Super Bowl season. They are feeling the weight of a string of unproductive drafts in recent years, and they seem to have struggled with identifying which guys they really need to keep around to hold it all together. It sure looks like they are going to struggle to replace Malcolm Jenkins, for example, a leader and Swiss army knife who plugged in holes whenever necessary for the defense.

Questions are going to get very loud, very fast for the power brokers in the organization. We're only two weeks into the season, but this has the look of a disastrous year.

• Save for snaps coming as a result of injuries, there's just no reason I can see for Arcega-Whiteside to see the field in a meaningful situation. He has whatever is the exact opposite of the Midas Touch.

• If the Eagles didn't look like as much of a trainwreck as they are, it'd be a lot easier to enjoy the Mike McCarthy era beginning in Dallas. Get ready for some truly gruesome Eagles-Cowboys games this season.

• If this game had been played in L.A., I would have said Jim Schwartz should walk home from this game. Sean McVay made an absolute mockery of the defense in Week 2.