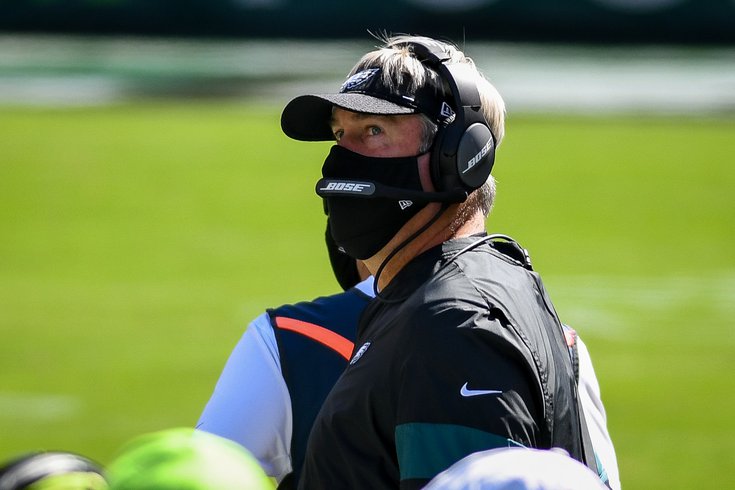 For anyone hoping Week 1's embarrassment at the hands of Washington's football team was a fluke, or replacement for missed preseason games, we are sorry.

The Eagles look like they are just not a good football team this season.

Despite there being glimmers of hope in the middle portion of the game, there was much more to be dismayed about during Sunday's 37-19 loss to the Rams in a mostly empty Lincoln Financial Field Sunday afternoon.

The Eagles couldn't stop the run, they couldn't contend with the pass, they couldn't maintain any offensive rhythm and they got very little from franchise quarterback Carson Wentz.

We've singled out five trends, out of probably three times as many, that the Eagles will need to sort out if they want any chance of limping to a 7-9 division championship in probably the weakest division in football:

Miles Sanders had no preseason, and didn't really participate in training camp, so his fumbling one of his first touches of the season didn't so much come as a surprise as it did a bad break. The Eagles defense was stuck contending with short fields over and over again in Washington, as Wentz turned over the ball three times in the opening day setback.

In Week 2, the Rams capitalized early on the short field, scoring a touchdown and collecting momentum with Goff's touchdown toss to tight end Tyler Higbee.

A clutch turnover on a punt to Kupp, when TJ Edwards forced a fumble, led to an eventual Miles Sanders touchdown scamper, cutting the Rams' lead to 21-16. It was nice for Eagles fans to have some positive vibes before the half. They wouldn't continue.

Wentz coughed up the ball in the worst of circumstances, throwing an interception on a pass intended for J.J. Arcega-Whiteside early in the second half. Coming out of the locker room with momentum from a defensive three-and-out to open the half, Wentz led the Birds down the field. The march ended with a pick, as a bad throw by Wentz was intercepted by Darious Williams in the end zone. Thankfully the 16-play Rams drive that ensued was stopped in the red zone as L.A. settled for a field goal.

It didn't impact the result of the game, but Wentz threw a second (fourth of the year) pick in garbage time as the Eagles tried to tally some extra yards and points trailing by double-digits.

If you watched this football game, it would be hard to ague that Goff looked like a legitimate MVP front-runner against the Eagles in Week 2. A week after the Birds defense made Dwayne Haskins look like a legit NFL starter, Goff came out red hot and completed his first 12 passes and was confident, quick and deliberate with the football.

The Eagles were unable to really pester him with any kind of pressure and without too many obstructions Goff was able to throw three touchdown passes and for 267 yards with just seven total incompletions in the game. The run game did the rest, as they came on strong in the second half and finished with 191 yards on the day.

Wentz was better than he was against Washington, well kind of, but never really looked comfortable behind center and threw several questionable passes — not just his two interceptions, but he missed open receivers on a few other throws as well.

It would be hard to argue that Goff was the better draft pick based on this one head-to-head matchup. Wentz probably has the better body of work overall, but Goff was clearly better in this Philly setback.

Are the Rams really fast or is the Eagles secondary really slow? Despite adding upgrades in the form of Darius Slay and Nickell Robey-Coleman (and moving Jalen Mills to safety), the Birds were unable to handle what was thrown at them by the Rams offense.

Missed tackles and lost one-on-one battles, added to the defense's inability to collapse to the ball in space and find a way to keep Cooper Kupp, Robert Woods and sometimes the Rams running attack in front of them.

Is the scheme to blame for not adjusting or accounting for the Rams offensive gameplay? Or are the players on defense simply not up to the task (as they haven't really been for two straight weeks).

Doug Pederson was out-coached Sunday and for anyone watching it was plain to see.

The performance of Goff, which consisted of the quarterback being put into positions where he could succeed (something Pederson and the Birds have struggled with), was a direct result of excellent play-calling from the young Rams head coach.

To eradicate the Eagles strength, which is their front four, the Rams called a series of misdirects, roll-outs and end-arounds to their talented skill players like Kupp and Woods. Seven different L.A. players got a carry, including three different wide receivers. One of the plays even resulted in a rare Woods touchdown run.

Wentz started doing a little of this later on, but it was plainly obvious that bootlegs, roll outs, and other creative looks are what Pederson should have had at the top of his gameplan. Some trickery, though the use of Jalen Hurts lining up at several positions all over the field as a decoy actually did yield results but was not used frequently.

In probably the most important defensive drive of the short season coming midway through the fourth quarter (with the game still in reach for Philly), Darrell Henderson (filling in for the already injured rookie Cam Akers), burst open a 40-yard run eluding several would-be tacklers that should have stopped him. Stopping the Rams there would have given the Eagles a chance at completing their comeback. A few plays later, Higbee caught his second touchdown pass of the game, a 28-yarder to put them up by two possessions.

The big plays — which included nearly a half dozen gains for L.A. of 20 yards of more — have been a thorn in the Eagles' side for the last few years. The difficulties stem, perhaps, from their secondary which was supposed to be upgraded for 2020 (as we touched on earlier). It's hard to win when your defense allows 449 yards of offense to the opposition.

The small play killed the Eagles too — all the plays, really — as the Rams out-worked the Eagles with 39 run attempts for 191 yards.