Rookie Jalen Hurts takes over as the Eagles' No. 2 quarterback 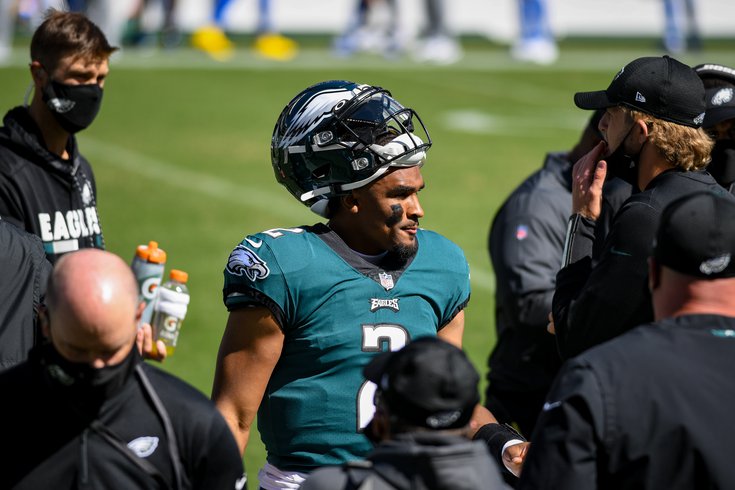 A bit of surprise news for Eagles fans came out shortly before inactives, when Eagles team insider Dave Spadaro posted on Twitter that rookie Jalen Hurts — and not the usual backup Nate Sudfeld — would be the Birds' No. 2 quarterback for their Week 2 matchup against the Rams.

Hurts, who was taken with the 53rd-overall pick back in April, was inactive in the opener as Sudfeld got the nod following an abbreviated offseason that included zero preseason games.

Many thought that Hurts would be the No. 3 quarterback for much of the season after the unique offseason that gave rookies less than than usual to get acclimated to life in the NFL, but it appears the Birds are willing to let him back up Wentz against the Rams on Sunday.

Could the reason for Hurts' elevation have less to do with his preparedness to go under center if the need arises and more to do with what he can bring to the field in potential two-quarterback sets or trick formations? He's certainly more athletic than Sudfeld, and his ability to be a dual threat has to be intriguing to Doug Pederson.

That being said, the Eagles head coach was asked earlier this week about what Hurts would need to do to be active, specifically if there would need to be a series of plays in the playbook to get him involved.

"No. I think that's a week-to-week discussion that we have as far as the backup quarterbacks," Pederson said. "You'd love to have all three quarterbacks up. We had [QB] Nate [Sudfeld] up this past weekend, and we make those determinations on really, injuries, and where we are as a team moving forward.

"But I would say that if he were up, he doesn't necessarily have to be a part of the game plan in any specific way."

That doesn't necessarily make it sound like this is a permanent thing, but that could certainly change. And when pressed with a followup about the need to have all three active, Pederson certainly made it sound like the main reason to have Hurts active would be to have "some versatility."

"I mean, why wouldn't you [want to have all three active]?" Pederson responded. "If you're good at every position -- it goes back to when I was a quarterback. I was the third guy and I was -- of course the rules were different but I dressed every week, and you were kind of that emergency third and it would be great to have your three guys up because it does give you some versatility if you wanted to do something with the other two guys."

That certainly sounds like a coach who is itching to use his new toy in an actual game.

Will we see Hurts on the field against the Rams — or will he just be a decoy? Or is this just a way of calming down fans who were irate in Week 1 after the team spent a second-round pick on a player who couldn't even crack the active roster in the opener?