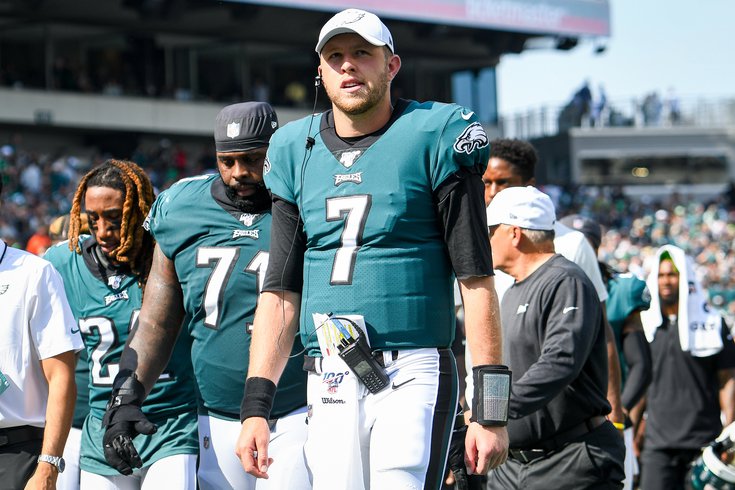 While the Philadelphia Eagles are far more banged-up than their opponent, as always, they will be getting some reinforcements, as Miles Sanders, Lane Johnson, Derek Barnett, and Javon Hargrave will all make their 2020 debuts. The Los Angeles Rams, meanwhile, come into this matchup free of any real game-changing injuries.

Here are the Eagles-Rams inactives, with analysis.

• QB Nate Sudfeld: The big news in the Eagles' inactives Week 2 is that Jalen Hurts is now the No. 2 quarterback. That didn't take long.

• OG Jamon Brown: The Eagles added Brown from the Bears' practice squad earlier this week. He could go from practice squad, to inactive, to starter, depending on how Nate Herbig's day goes on Sunday.

• OG Sua Opeta: It's probably only a matter of time before Opeta leapfrogs Matt Pryor in the pecking order.

• DE Genard Avery: Toohill is up, Avery down. That's interesting.

• RB Jason Huntley: Huntley was active Week 1, and got one carry.

• DT Javon Hargrave: A bit of a surprise here, but Hargrave will make his Eagles debut this Sunday after missing all of training camp with pectoral and hamstring injuries.

• DE Brandon Graham: Graham has cleared the concussion protocol, but had to remain symptom free until game day, hence his "questionable" designation on Friday. But he's good to go.

• DE Derek Barnett: Barnett missed an opportunity to play against a not very good starting LT in Geron Christian Week 1. In Week 2, he'll face Rams LT Andrew Whitworth, who is older than Jason Peters. The bet here is that he'll split snaps with Josh Sweat, who played well Week 1.

• DE Vinny Curry (short-term IR): In Week 1, Curry started, and had 3 tackles and a half sack on 22 snaps. He had to be helped to the locker room after reportedly injuring his hamstring.

• DT A'Shawn Robinson (NFI): Robinson was a second-round pick of the Lions in 2016 who signed with the Rams this offseason. He is currently sidelined with a "cardiovascular condition," per Jordan Rodrigue of The Athletic.

• Edge Terrell Lewis (NFI): Lewis was a third-round pick of the Rams in the 2020 NFL Draft. Very talented, athletic player, but injury-prone.