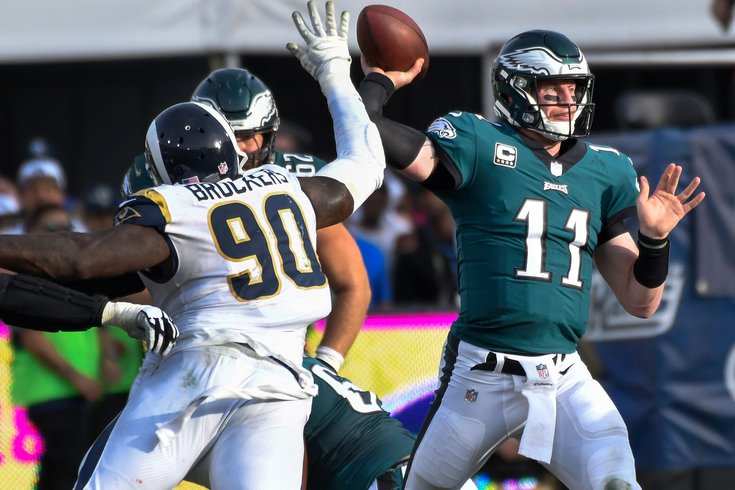 It's weird to call a Week 2 game a must-win, but that's often the feeling for teams who lose their season opener, especially those who entered the year with postseason aspirations. And the Eagles are certainly one of those teams.

After a Week 1 dud against Washington in which they blew a 17-0 lead, the Birds will welcome in the Rams to Philadelphia for their "home" opener (quotation marks because there won't actually be any fans in attendance). The Rams, meanwhile, will be looking to improve to 2-0 after beating the Cowboys on Sunday Night Football.

The Eagles are 2-0 against the Rams under Doug Pederson, winning both of those games with Carson Wentz on the sideline, including the first matchup in which Wentz suffered a torn ACL before setting the franchise record for TD passes on one leg. The Eagles are hoping there will be no such drama this time around, but in order to accomplish that, they'll need to shut down Aaron Donald and the rest of the Rams defensive front with an offensive line that was anything but solid last week. Getting Lane Johnson back should help, but the questions still remain.

A loss (and an 0-2 record as a result) will likely send the fanbase into even more of a spiral, and could make for a dark week in Philadelphia sports as the Phillies' struggles also continue. But, as we've seen time and time again in this city, an Eagles win can go a long way to making everyone happy.

So, how will the game play out? Depending on where — and when — you look, the Birds could be either a favorite or an underdog as the line continues to bounce back and forth. The Eagles opened as a favorite before it swung back to a pro-Rams line. Currently, TheLines.com's consensus odds has Philly as a 1-point favorite.

We (sort of?) know what the oddsmakers think, so let's take a look at who some local and national experts are picking to win on Sunday...

• PhillyVoice staff: Our writers are a bit split this week, with five of the seven picking an Eagles win. Who are the two traitors? You'll have to click over to find out, but Evan Macy is not among them. Here's why he's picking the Birds to win by a point:

Do I think the Eagles are better than the Rams? I am not entirely sure. But I didn’t think Washington was better than Philly either and you saw what happened.

I do think that the Eagles will bounce back with healthy(ish) returns from Miles Sanders, Lane Johnson and Derek Barnett. The Birds are a borderline (at best) playoff team right now in my mind, but I expect more from this offense and I think if Wentz makes smarter decisions and perhaps plays a little more conservatively, letting his skill players make plays rather than forcing it himself, they will be just fine.

The injuries will only get worse, so banking some wins before the practice squad takes the field again in Week 14 will be critical. I am not sold on them being better than L.A. but I think they’ll eek out a win in Week 2.

• Inquirer.com: Their four Eagles writers are split on this one. Here's a look at one of the two predicting the Eagles lose on Sunday, courtesy of EJ Smith:

... The Eagles, trying to avoid falling into an 0-2 hole, will be the team with the greater sense of urgency. I usually put significant stock in that urgency advantage, especially considering the Birds are at home, but I struggle to see this team plugging all the holes that led to last weekend’s loss.

If I’m wrong, it’s because the return of Lane Johnson, Miles Sanders, and Derek Barnett made enough of a difference to vastly improve things, but the trio of starters, all of whom missed most or all of training camp, will likely need some time to knock off the rust and play at a high enough level to truly cure the Eagles' ills.

• NJ.com staff: Five of their seven writers are picking the Eagles to win their home opener against the Rams. Here's more from Eagles beat writer Mike Kaye, who sees a 20-16 victory for the Birds...

The Eagles absolutely need this one. While fans won’t be at The Linc, Philly will have the benefit of an early start against a west-coast squad. Doug Pederson is 2-0 against Sean McVay, and there’s no way Carson Wentz and the OL could be worse than they were in Week 1, right? This should be a bounce-back weekend for the Birds.

That said, don’t expect fireworks in this one. The Rams weren’t necessarily buzzing on offense in Week 1. Also, even with right tackle Lane Johnson potentially back in the fold for the Eagles, it’s hard to imagine the home team’s offense will be firing on all cylinders.

• Bleeding Green Nation staff: Another week, another clean sweep from our friends at BGN, with all nine writers picking the Eagles to win.

• ESPN staff: Just three of their nine national experts are picking the Eagles to knock off the Rams on Sunday.

It looks like the Eagles will get right tackle Lane Johnson, running back Miles Sanders and defensive linemen Derek Barnett and Javon Hargrave back in the mix, just as they lose Brandon Graham, who's in the concussion protocol. Johnson won't solve the Eagles' protection woes alone, especially against a version of Aaron Donald who might somehow be better. I loved what I saw out of the Rams last Sunday night, so this pick is primarily based on the theory that capable 0-1 teams usually find a way to bounce back the following week.

• CBS Sports staff: Just two of their eight experts are picking the Birds to bounce back this week with a win. The other six are picking the Rams, as it looks like a L.A. trend might be developing nationally. Here's what Pete Prisco, who was one of the two to pick the Eagles (27-21), had to say:

The Rams looked good beating Dallas, but this is a tough spot. It's a long trip against a wounded team that needs to win. So even with all the injuries, I think the Eagles, who blew a 17-point lead last week and lost to Washington, will bounce back to win this one. Carson Wentz plays well.

The top two picks of the 2016 draft get together. Both have gotten paid like franchise quarterbacks. Both are currently having trouble living up to that title. The Rams are healthy and, for now, the better overall team.

Aaron Donald wrecked the Cowboys, and I have a feeling he’s going to feast on the Eagles’ offensive line as well.

• USA TODAY Sports staff: Just one of their seven experts are picking the Birds.

• SB Nation staff: It's an even split over at SB Nation, where five of their 10 experts are picking the Eagles.

• Bleacher Report, NFL staff: Each week, B/R offers up a consensus pick from their six NFL experts, and this week, five of them picked Los Angeles. They final score prediction? Rams 26, Eagles 20.

Here's a bit of what they had to say about this one:

... The injuries are indeed daunting for Philadelphia. They're already without offensive linemen Andre Dillard and Brandon Brooks, while right tackle Lane Johnson has an ankle injury, veteran Jason Peters has an injured knee, top running back Miles Sanders is trying to get over a balky hamstring, wide receiver Alshon Jeffery is still sidelined with a foot injury, and defensive linemen Brandon Graham (concussion), Derek Barnett (hamstring) and Javon Hargrave (pec and hammy) are also on the injury report.

The Rams might not be totally trustworthy based only on one strong showing against the Dallas Cowboys, but head coach Sean McVay should scheme up many ways for his offense to exploit the injury-ravaged Eagles. Plus, Aaron Donald likely checked out the tape of what Washington's defensive front did to generate eight sacks on Philadelphia quarterback Carson Wentz in Week 1. ...

• Sheil Kapadia, The Athletic: Former Eagles beat writer turned national writer at The Athletic, Sheil Kapadia, makes picks against the spread for every game. And this week, they have the Birds as one-point underdogs, so he's essentially making a straight-up pick. And he's taking Philly...

The Eagles opened as 3.5-point favorites, but as of this writing are now underdogs. Over the past five seasons, only the Packers’ defense had a bigger edge than the Eagles when playing at home versus on the road. But obviously, there will be no fans in the stands for this game. Rule number one for making picks in Week 2: Don’t overreact to what happened in Week 1. The Rams were impressive in their win against the Cowboys, and the Aaron Donald montage that NBC showed in the second half had to be terrifying if you’re an Eagles offensive lineman. The Eagles, meanwhile, were one of the biggest Week 1 disappointments. Things balance out here between two pretty evenly-matched teams.

This matchup makes the Eagles' Week 1 clunker against Washington much worse, because the level of difficulty rises significantly against the Rams. If Washington was able to sack Carson Wentz eight times, what are we supposed to expect Aaron Donald and Co. to do? If the Eagles' defense can get the Rams' offense off schedule, Philly will have a good chance to win. If not, it's an 0-2 start for the defending NFC East champs.

The Eagles' offensive line injury issues have turned a strength into a glaring weakness in front of Carson Wentz and a backfield that's seriously hurting, too. They also have limitations in the downfield passing game. It's a bad time for Aaron Donald and Jalen Ramsey to pay them a visit. The spotlight might be on the 2016 top-of-draft reunion of Jared Goff and Wentz, but Goff gets a better break up front and on the back end while Wentz will deal with more duress and less rushing support. The Rams will be more effective with their two tight ends than the Eagles will.