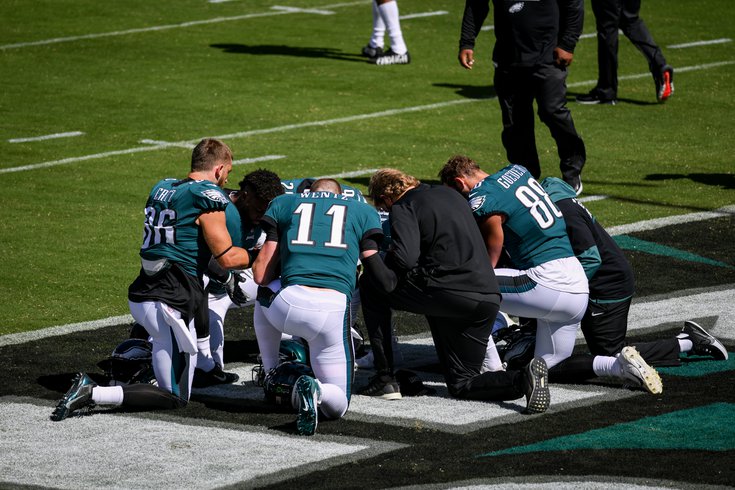 Week 2 of the NFL regular season is in the books. The Cardinals are legitimate contenders, the Falcons are the chokiest bunch of chokers to ever choke, the Football Team came back down to Earth, and the Eagles stink. Let's just get right to it.

Lol. The Bucs... weren't fooled. Just go for it. The one thing that you do have is Christian McCaffrey. At least have him on the field maybe in a high-leverage situation?

McCaffrey, by the way, could be out for more than a month with a high ankle sprain.

15) Giants (0-2): It was confirmed on Monday that Saquon Barkley is done for the season with a torn ACL. In the past, running backs have had mixed success returning to form after ACL tears, though treatment of them has improved over time. Additionally, Barkley's tear occurred early enough in 2020 that he'll be ready for the start of the 2021 season, barring setbacks.

Adrian Peterson is of course the most commonly cited ACL success story at the running back position, after he led the league in rushing the season after rehabbing a completely shredded knee. Peterson was a physical specimen, and so is Barkley, so I like his chances of coming back and getting close to being the player he was.

Still, this is obviously a huge blow to a team that is already nearly barren of high-end talent, and it's yet another reason why you don't draft running backs second overall.

They've lost 11 straight, and 14 of their last 15 games. The following is a list of head coaches fired in-season since 2010. It happens more often than I thought.

It's really not a question of if Patricia gets fired. It's only a matter of who will be first among Patricia, Adam Gase, and Dan Quinn.

12) Eagles (0-2): The window is closed. This team is not a Super Bowl contender. Most of the team's best players are older and in decline, and there's very little in the way of good, young players to get excited about, at least compared to other teams around the league.

The best thing that can happen for the Eagles is for the Cowboys to just run away with the division, and quickly, or you're going to see the same pattern, yet again:

If you look at the the consensus odds from TheLines.com, assuming all goes to plan, the Eagles are positioned to be tied atop the garbage NFC East once again:

What an injustice that would be after the way this team has played so far this season. I know that it would be hard to watch for some of the diehards, but a loss to the Bengals would go a long way toward ending the aforementioned pattern of mediocrity that just isn't going to work.

MORE: Wentz, Eagles have been really bad — but Pederson’s excuse for why might be even worse | Eagles LG Isaac Seumalo headed to IR | What was it like photographing an Eagles game, with no fans, during a pandemic?

11) Falcons (0-2): If you cover this sport long enough, you'll get a few things right here and there. From my picks column last week:

Falcons at Cowboys (-4.5): The Choke Bowl. Give me the Cowboys to be less chokey in this one.

The Falcons had 39 points with zero turnovers in their loss against the Cowboys.

Entering today, teams were 440-0 when scoring 39 points with 0 turnovers since 1933, when team turnovers were first tracked, according to Elias. pic.twitter.com/LZdqzwQZyD

10) Vikings (0-2): The Vikings were already without Danielle Hunter (neck, IR), and now they also lost Anthony Barr for the season with a pectoral injury. The only team that has given up more points so far this season is the Falcons, and it might only get worse.

9) Bears (2-0): In each of the first two weeks, the Bears held four-point leads over bad teams, and survived last-ditch throws into the end zone. Week 1 vs. the Lions:

And Week 2 vs the Giants:

The Lions and Giants are a combined 7-28-1 since last season. The Bears jump from 12 to 9 here in the hierarchy, because it's hard to justify putting any of the teams behind them ahead of them, but losses are coming their way soon.

8) Buccaneers (1-1): Yes, the Bucs picked up their first win, but the Panthers outgained them by almost 100 yards, they had more first downs, and they controlled time of possession. The Panthers just turned it over four times, including two gift INTs by Teddy Bridgewater, plus they had the ridiculous fake punt shown above. I remain unsold.

7) Cowboys (1-1): The Cowboys made a ton of mistakes early, including a four-drive stretch in which they lost three fumbles and couldn't convert on a fake punt.

Give them credit, though. They never quit, and their offense caught fire, scoring 30 second half points on 6 drives.

6) Rams (2-0): They're not a very complicated team. If you stop their run game and get them into long down/distances, Jared Goff isn't going to carry them. If they stay on schedule with their rushing attack, all that boot action and jet motion crap makes the game so much easier for Goff, and they can be effective.

5) 49ers (1-1): Here is the Niners' looooong list of injuries, via David Lombardi of The Athletic:

Those "feared" ACL tears for Nick Bosa and Solomon Thomas have since been confirmed.

MORE: Week 3 NFL betting lines: Point spreads for every game, including Eagles vs. Bengals | A too early look at Eagles trade deadline candidates if they're sellers

4) Saints (1-1): A lot of people have been hoping Drew Brees would be cooked for years now, but he kept on producing. Last night, though, in a domed stadium...

He just didn't seem to willing or able to throw the ball down the field. I'm not calling him cooked yet, but...

2) Packers (2-0): Aaron Jones is one of the most underrated players in the NFL. Look at these yards per carry numbers over his career.

He can run inside, outside, catch passes out of the backfield, and he scores a buttload of touchdowns. Here's what he did Week 2 vs. the Lions: