Wentz, Eagles have been really bad — but Pederson’s excuse for why might be even worse

The head coach blamed the shortened offseason for his team's early struggles, forgetting that 31 other teams dealt with the same restrictions... 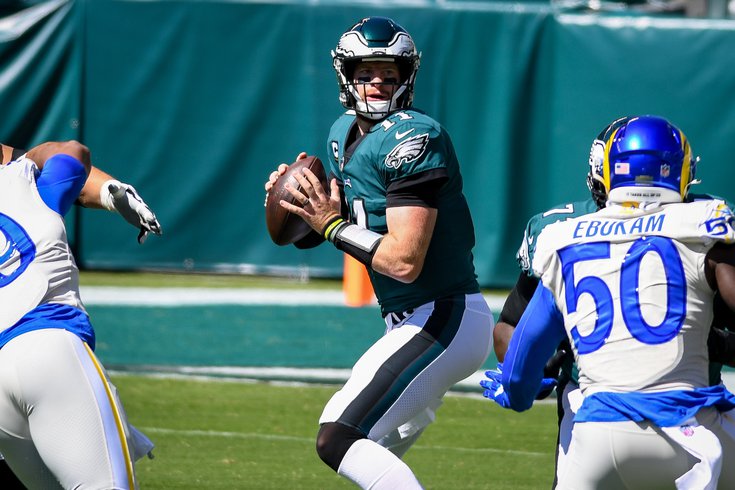 Carson Wentz looks to pass during the Philadelphia Eagles' loss to the L.A. Rams.

Sometimes, it's best to not overthink things. That can be especially true in sports.

The Eagles are 0-2, and while there have been numerous issues on both sides of the ball, it's no secret that Carson Wentz's struggles are a big part of why.

In the opener, he threw a pair of interceptions and lost a late fumble as the Eagles fell to Washington. This Sunday against the Rams, with second-round pick Jalen Hurts a surprise addition to the active roster, Wentz threw two more interceptions, including one in the end zone that head coach Doug Pederson called "unacceptable" on Monday.

With four interceptions through two games, Wentz is already more than halfway to his season total in each of the last three years (7).

But it's not just the interceptions — or the terrible timing of them. And it isn't just an offensive line that allowed eight sacks and tons more pressure in Week 1. Wentz actually had ample time to throw against Los Angeles and wasn't sacked once. Still, he looked bad, often at times when he had no business doing so.

Carson Wentz has made 20 off-target throws this season, most in the NFL.

15 have come inside a clean pocket (not pressured or under duress).

There's no injury excuses this year like there were in the past.

But head coach Doug Pederson had a different excuse for his quarterback's poor play against the Rams, one that sounded a lot like the injury-shortened offseason excuses we've heard in the past.

"Just missing," Pederson told reporters Monday when asked about Wentz's inaccuracies when operating in a clean pocket before offering up an excuse for his QB. "I guess you can point to a lot of different things: Missing OTAs, not having all the necessary maybe reps during training camp, missing preseason games, whatever it might be, the timing of things that we do in the passing game and just missing these throws. They are throws that he typically would throw, and it's a little bit, too, on the receivers. Sometimes the receivers need to make the catch as well. So it's things that we have to continue to work."

That sounds like it could be true on its face — or perhaps a way of blaming "something" without placing too much of that blame on his players. But it becomes laughable when you consider that 31 other teams were in the exact same situation this offseason.

Cam Newton missed those reps and had 397 passing yards yesterday.

Justin Herbert found out he was starting 10 minutes before kickoff. The Chargers outscored the Eagles yesterday. https://t.co/XRkOhULE6X

And on top of that, the Eagles actually had a decent amount of carryover from year to year.

Let’s say the #Eagles have been more affected by the offseason restrictions because of new faces.

Same DL save for 1 guy
No new LBs
If any change, 3 new DBs

"I think we had a set of rules and protocols that we had and guidelines to go by, so many hours on the field, so many hours in the building and quite frankly, with a lot of new pieces, particularly in the skill position, with [WR] Jalen [Reagor] and [WR] John Hightower, even [WR] J.J. [Arcega-Whiteside], getting J.J. back out there, and [WR] Greg Ward, relatively new guys, you're talking about two and a half to three weeks of actual, full-speed timing throws," Pederson said when pressed about the fact that other teams were in the same situation.

But that didn't seem to deter the head coach from continuing to blame the lack of preparation for his team's early season struggles.

"I don't care who is throwing. I don't care who the receivers are. Two and a half weeks to prepare for your first real game; it's not enough time," Pederson continued. "It's not enough time, and it's a constant work-in-progress and we continue to work, and I continue to — I know you guys don't see it because you're not at practice much, but I continue to kind of restructure practice a little bit so we can spend more time during practice getting these throws and getting — detailing the fundamentals of the route and the details of the route.

"Look, when you put the film on and you watch these last couple of weeks, the mistakes we're making, yeah, they are devastating mistakes. I understand that. But there's a lot of good out there, too, and there's a lot of positive that we can build on and we're not far off. Our offensive line played well against another good front yesterday. Aaron Donald, for the most part, wasn't around Carson. Maybe once or twice, but we kept him away from the quarterback. They played well. Our running game picked up yesterday. Miles [Sanders] did nice job yesterday in the run game, our tight ends and receivers blocking, all of that, and there's timing that goes along with that, as well.

The passing game is a little different, right. It takes some time. We're going to continue to work and get better."

The passing game better improve, as that was a focal point for the Eagles this offseason. After finishing 2019 with a cast of practice squaders starting at receiver, the Eagles went out and addressed the position, spending three draft picks (including a first-rounder) on new wideouts for Wentz. But the top three pass catchers from a year ago are back in Zach Ertz, Dallas Goedert and Miles Sanders, and Wentz, like Pederson, is now in his fifth year. They should be better, even if they had less time than previous years — and no preseason games — to prepare for the regular season.

So why do they appear to be regressing?

"It's a good question," Pederson said. "For us, it's a matter of continuing to work. I think as coaches and players, we continue to strive to get better every single day. I just don't want Carson to feel like he has to make all the plays every single time. I want him to just be Carson and you guys know him, you've been around him, you've heard him, his demeanor. He wants to do everything right and we've given him control to do that, but we just have to continue to work to get better.

"I don't think anybody can totally master the sport. You're constantly learning and getting better, and that's what we've got to do and continue to coach that.

The problem is, Wentz isn't getting any better. Just take a look at some of his 2020 stats and where they rank among all NFL quarterbacks, as compiled by Kevin Kinkead of CrossingBroad.com:

And, as Kevin went on to show, the NextGen stats aren't any better for the Eagles quarterback.

Without looking back through the game logs, it's probably safe to assume that these are the worst back-to-back performances in Wentz's football career. But Pederson isn't worried.

"I'm not concerned about that because of just who Carson is," he said Monday. "I see his work ethic during the week. One way to get out of it is you've just got to continue to stay aggressive, right. Stay on the attack, and I don't want anybody to go into a shell. That's no way to approach our business, our craft, our jobs, and for sure I don't want the quarterback position, in this case, Carson, to do that, as well. We just have to stay on the attack, and we have to continue to work, so I'm not concerned about that at all."

Pederson also admitted that the Eagles "could do some things differently" on offense to try to get Wentz back on track, but also added that there were "just a couple of plays" he'd like to have back from Sunday's loss to the Rams.

The Eagles will look to get back on track on Sunday when they host the Cincinnati Bengals in a very winnable game at The Linc. Well, it should be extremely winnable, but not if the Eagles keep playing the way they've been playing. Still, it doesn't sound like anyone at the NovaCare Complex is panicking, including their quarterback.

"We’re obviously frustrated. You never want to start 0-2. Last week, the way we lost to Washington, starting 0-1 is obviously not what we want and not how we expect to finish ball games," Wentz said after the game on Sunday. "And then today, coming out behind again, [is] not where you want to be. But we know there’s enough things through two games, offensively speaking, that we can put on the tape and know we’re right there [and] just missing some things.

"We’re right there, don’t panic, we’ll be okay. I’ve always had all the confidence in the world in our defense. Things happen, but we’re not panicking and excited to get back on it."

For those watching at home, it might not feel like the Eagles are "right there," But Wentz was not alone in that sentiment. His head coach echoed that statement on Monday as the team gets ready to turn its attention toward the Bengals.

"As I said, I think either this morning or after the game, I can't remember now, but those guys in that locker room are mad. They are upset that we're 0-2 and in this position. But nobody's going to feel sorry for the Philadelphia Eagles or feel sorry for me. I'm going to come here every day and take your questions. You may not like the answers, but I don't care, quite frankly, and what I care about is our team, right and getting our team prepared to play the Bengals this Sunday."

MORE: Rookie Jalen Hurts takes over as Eagles' No. 2 QB