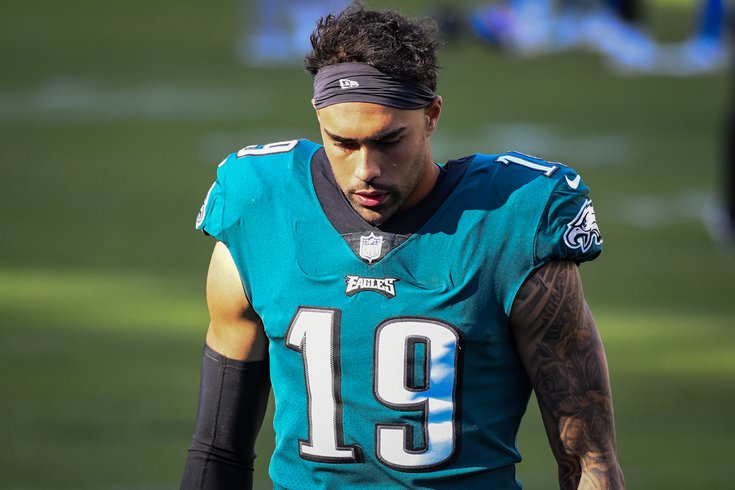 The start to J.J. Arcega-Whiteside's second NFL season has not gone well.

In their Week 2 loss to the Los Angeles Rams, the Philadelphia Eagles played 71 snaps on offense, and 69 woeful snaps on defense. Let's just get right to the snap counts.

Analysis: Hurts is now definitively the No. 2 quarterback of this team, as he leapfrogged Nate Sudfeld in the pecking order. That didn't take long. Hurts lined up as a running back a few times, as nothing more than a decoy.

There's going to be plenty of criticism of Wentz this week, so we'll save that for other articles.

Analysis: The offensive line played well. They opened up some holes in the run game, and they didn't allow a sack. Wentz had plenty of time to throw all day, but again, we'll get to that as the week goes on.

Seumalo left early with a knee injury, and could not return. Pryor filled in for him at LG. Herbig also left for the locker room late in the game, but the Eagles never got the ball again, so we didn't get to see who would have filled in at RG. The guess here is that it would have been Driscoll.

If Seumalo is out a few weeks, the Eagles will have more offensive line juggling to do.

Analysis: The Eagles will have Devonta Freeman in for a visit this week, and if he signs with the team, Clement's roster spot could be in danger.

The Eagles didn't ease Sanders back in, as he had a "carry the load" type of day, carrying 20 times despite the team trailing in this game for more than 56 minutes.

Hightower also had a great camp, and the Eagles rewarded him with 27 snaps Week 1. He had a bad debut, and the Eagles promptly pulled back on his playing time. I thought they might try to get the ball in his hands at some point on Sunday to help him regain his confidence, but that didn't happen.

Analysis: Ertz is averaging 7.5 yards per catch on eight receptions. So much for him killing in the middle of the field with speed now on the outside.

Analysis: Once again, the defensive line underwhelmed. If this season goes sideways, the Eagles should give serious thought to entertaining trade offers for Cox while he still has value. The same goes for Barnett, who is scheduled to make over $10 million next season on his fifth-year option.

Not noted above is Genard Avery, who was a healthy scratch. The Eagles lit a draft pick on fire by acquiring him at the trade deadline last year.

Analysis: Edwards made five tackles in limited snaps, and forced a fumble on punt coverage that led to a TD. Gold star for him. Gerry and Riley were, um, less than awesome. We'll maybe get to them in more depth later this week.

Analysis: Robey-Coleman felt like a steal on a one-year contract worth $1,350,000. Maybe not so much. He had a rough afternoon. I'm curious to see how many tackles he missed against his former team.

The Eagles opened as 5.5-point favorites. That line currently sits at Eagles -6.5, via TheLines.com.