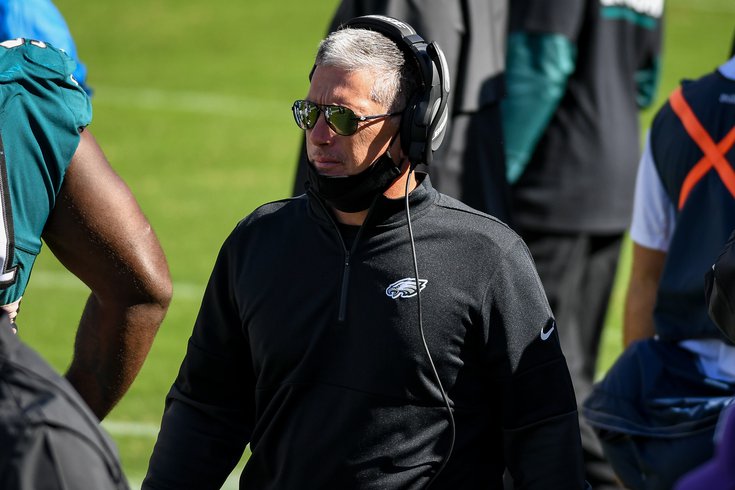 The Eagles defense talked a good game all week.

They knew all about Sean McVay and what he was about. They understood the pre-snap motion and the misdirection that was coming from the Rams coach. The "OG" of eyewash as Jim Schwartz described McVay leading up the game was heading east against the team that was able to play spoiler against his high-powered attack in both 2017 and 2018.

Nickell Robey-Coleman knew what Cooper Kupp was about after spending years practicing against him. Jamon Brown arrived just in time to explain what McVay is trying to accomplish with his sleight of hand tricks: "The illusion of complexity."

And yet that illusion was better than anything David Blaine or Criss Angel could pull off Sunday at Lincoln Financial Field, as a sparse crowd of cardboard cutouts and a dramatically scaled-back media horde popped in to see the Rams pile up 449 yards of total offense en route to a 37-19 win.

"It was identical to what we practiced," veteran safety Rodney McLeod said of the LA offense. "This was one of those games where you had to play fundamentally sound disciplined ball [and] trust in one another, whether that’s the D-line holding up there standing to us in the backend understanding how they are going to attack us in what areas and where we need to be."

“We knew how they were going to play us," BG said. "We knew that they like to play left and right. And we almost had them playing our game going straight, drop back. They did a good job. They are the best at having a lot of distraction out there. Coach [Doug Pederson] harped on it all week, we have to stop the boots, we have to stop the stretch game. And today it came down to those little things."

A plan is one thing of course. Executing it is another, and the Eagles fell apart when the bullets started flying.

"I feel like we started to chase plays rather than be in the moment and trust in one another consistently," McLeod explained. "We did battle back and put ourselves in good position but failed to finish the game in the fourth quarter.”

There were plenty of other issues as well, starting with the quarterback's lack of consistency and accuracy throwing the football. Heck, even Mayor Jim Kenney can shoulder some of the blame for a defense that typically dominates at Lincoln Financial Field when fans are actually allowed inside the building.

Instead, the City banned fans from even entering the area and tailgating, allowing only those taking in a Jurassic Quest experience through checkpoints around the sports complex.

A unit that has typically fed off the emotion and energy of 70,000 had no appetite.

With the intimidation factor gone due to COVID-19, Jared Goff and Co. kicked off their shoes and made themselves comfortable. They threw it early and ran it late and for large portions of the game they did whatever they wanted.

The red-zone woes continued and through two games Philadelphia is allowing 32.0 points per game, admittedly a small sample size but also their worst start from a defensive standpoint in nearly a half-century.

“We came up short today. We lost. Our goal was to stop the run. Our goal was to eliminate the boot game. We understood they would do a lot of misdirection, jet motions, screens, and we didn’t execute to the best of our abilities today," McLeod lamented. "We have to own that right now."

For Graham, though, the ownership of a toxic timeshare of ineptitude on two Sundays in September 2020 is self-inflicted.

"We can’t get frustrated by their game plan," Graham said. "We have to make sure that we continue to stay doing those little things — what we do as a defense and how we play — and we should be fine. But I do think everything that happened today was self-inflicted.”

The biggest mismatch figured to be Aaron Donald against Nate Herbig, but the second-year Stanford product held his own as did Isaac Seumalo before going down with a knee injury and then Matt Pryor. The real mismatch McVay actually uncovered was his pass-catching tight end Tyler Higbee against the Eagles' back seven, most notably Nate Gerry and Marcus Epps.

The big nickel, a staple when Malcolm Jenkins was around, was a big disaster and one that should probably be put in mothballs, at least until Will Parks returns.

"Every year, you're going to have turnover. That's just the way this league is and the way the business goes," Pederson answered when queried about all the changes on defense.

Schwartz has labeled that kind of thing start-up costs in the past and the Eagles are paying a steep price right now in the hope it pays off down the road.