Numbers, grades and rankings are great, but they all too often lack appropriate context 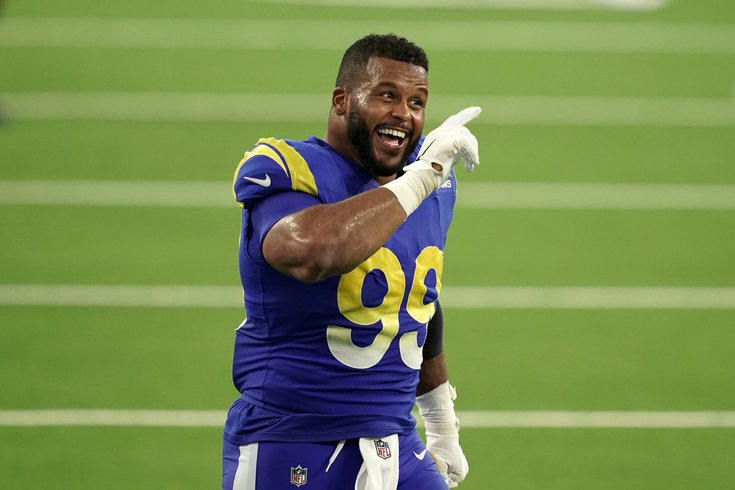 Why would you ever doubt Los Angeles Rams defensive lineman Aaron Donald?

It's not hard to find experts on social media. Spend 10 minutes on your phone and you'll quickly locate a plethora of authorities who have all the answers when it comes to global pandemics and systemic race issues that have existed since the 1600s. Then it's lunch and onto the economy and Middle East foreign policy.

With that understanding, it’s hardly surprising that these types of geniuses also exist in the world of football, with the weird self-aggrandizing belief that they have a leg up when it comes to evaluation of NFL players, a far greater feel for the sport than the football lifers who actually lucked in to being employed around the league.

The easiest way to get noticed is to fight upstream against groupthink, which is not necessarily a bad thing and can often be a brave one because it's not easy to stand up against an angry mob demanding conformity.

It's always a fine line, though, and in the case of Aaron Donald, it became a look-at-me line.

Donald, the All-World Los Angeles Rams' defensive tackle who will be at Lincoln Financial Field in Week 2 might be the real reason why Jason Peters woke up earlier this week and decided to walk into the head coach's office and confirm the real organizational flow chart in Philadelphia by approving a move back to left tackle.

Donald is universally regarded as the best interior lineman in the league and is on the very short list for top defensive player in the NFL, not because people are searching for conformity but because Donald’s peers and coaches around the league revere him.

Had Peters gotten to Week 2 at right guard, you might have seen a late-career Kareem Abdul-Jabaar vs. Moses Malone migraine situation.

For some reason, though, someone hit Twitter with a new “advanced stat” revealing Donald wasn't very good against the run, largely because his uncanny ability to generate penetration was often being used against the Rams. In other words, the Pitt product's dominance was being used against him in the ultimate team game because others around him weren't carrying their own water.

Here's an example of the kind of analysis we can do with RBWR and RSWR: Aaron Donald is average vs the run. I'll go toe to toe with the film guys on this one. He gets a lot of penetration but it's ineffective. https://t.co/G1nXxE96xe

The simple answer here was that any Rams’ team failure wasn’t tied to Donald, but that’s obvious and boring.

The best example of this kind of thing locally is when the Eagles blew out Denver during the 2017 Super Bowl season and there was a disconnect in which ProFootballFocus.com pointed out that Von Miller was his usual dominant self in a 51-23 blowout loss to the Eagles, enraging certain fans who believed their guy, Lane Johnson, completely shut down the big name.

As usual, the truth was nestled comfortably in between the black and white takes. Doug Pederson and Co. put together a brilliant game plan that used Miller's talents against the Broncos and Johnson implemented it beautifully, allowing Miller to effectively work himself out of position on a number of plays while the rest of his teammates handled the lesser Denver players.

It's actually what every smart team tries to do with Donald each and every week now.

The context of this is always the players.

Johnson, for instance, is in awe of Miller, calling his pass-rushing bend the best in football and will often volunteer how difficult the Denver All-Pro is to deal with.

Meanwhile, every season this reporter will ask a number of Eagles who they respect around the league outside their own locker room when cobbling together my All-Pro Team. The tact was different last season with Brandon Brooks, the Eagles' All-Pro guard, and probably the only guy not named Quenton Nelson with a credible case of being the best in the league at his position.

Because the answer that Brooks was going to give was so obvious and definitive, the query was started "Beside Aaron Donald who are the best interior linemen you've gone against?"

Brooks hesitated for a split second and said "no one else is close."

Coaches are another stamp toward common sense.

Wade Phillips, Donald's former DC in LA, simply chuckled when he was made aware of the recent critique of Donald.

Eagles special teams coordinator Dave Fipp is maybe the least controversial guy you are ever going to meet. Back in the spring when asking Fipp about the XFL kickoff rule, which was far more innovative and entertaining than the NFL's waste of 10 seconds to touchback, he shut down, not wanting to point out the obvious and disparage the league.

The point there is that Fipp isn't Bill Belichick, Mike Zimmer or Jim Schwartz, gruff types who put critics outside their buildings on the pay-no-mind list, yet even Fipp inadvertently highlighted the problem with the skewed Donald take when asked about his kickoff coverage and how it was graded by FootballOutsiders.com.

Fipp then explained why.

Former Eagles executive Joe Banner explains the goal isn’t data, it’s actionable data that can be deciphered and used for an advantage.

"Again, I'm not trying to knock the source. I'm sure there is a lot of valuable information in there," Fipp continued. "We do look at a lot of statistics and study a lot of different things. There are some of those rankings they don't tell you the formulas that they're using or how they come up with them.

"So we don't put a whole lot into that. I couldn't really tell you exactly what they're looking at."

Understanding the limits of your own data and what you have actually measured with the intrinsic flaws baked in is the trick and what differentiates good and bad data analysts.

Pro-tip: If your stat comes back with a player like Donald being dismissed or even downgraded, throw it out.

John McMullen is the NFL Insider for JAKIB Media and also contributes Eagles and NFL coverage for SI.com. You can reach him at jmcmullen44@gmail.com