John McMullen: Joe Judge isn't afraid to let his QB get 'popped' in practice — and I'm here for it 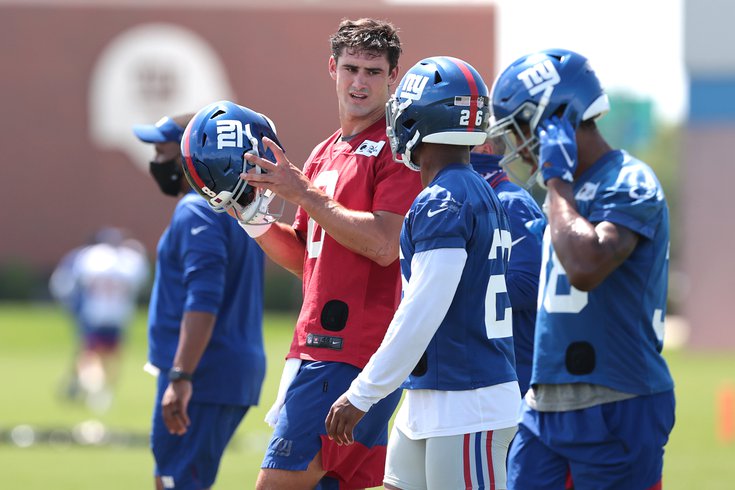 The red jersey could be soon coming off of New York Giants quarterback Daniel Jones, seen here talking with running back Saquon Barkley.

Joe Judge is making some noise up the New Jersey Turnpike with the New York Giants.

The Philadelphia native and Bill Belichick disciple is creating those waves in the typical fashion, by daring to step outside the box.

Judge, a Lansdale Catholic product, was even declared a pending disaster by some before ever reaching Game 1 in his NFL head-coaching career because he dared to step outside the realm of conventional thinking on a few times this week, most notably by entertaining the thought of “popping the pads” of second-year quarterback Daniel Jones to try to get him ready for contact and also making his defensive backs practice with tennis balls taped to their hands to keep them from holding.

Looked like Giants defensive backs had tennis balls taped to their hands during practice the past few days. Turns out, that's the case. Judge said they're teaching them not to hold. "We're not going to accept penalties. So we'll find any little trick we can to teach them." pic.twitter.com/gJ0hzeEXDu

Full disclosure from me on the latter tactic -- it’s brilliant.

"We're not going to accept penalties. So we'll find any little trick we can to teach them," Judge said, describing an effort to eliminate costly holding penalties in his secondary.

Conversely, the former idea went over like a lead balloon in a safety-conscious culture where too many in the media are concerned with issuing moral decrees rather than dispensing information.

"You know, we've talked about it," Judge told reporters Tuesday when discussing the thought of taking the red jersey off his QB1. "With quarterbacks, you want to be calculated with how you start banging them around."

Some believe legislating injuries is a laudable goal. Others find the idea laughable, but Jones is going to get hit in the 2020 season whether that comes on Sept. 14 against the Pittsburgh Steelers or in August at the Quest Diagnostics Training Center.

"The injury rate in this game is 100 percent," Eagles Pro Bowl tight end Zach Ertz has explained. "If you play long enough, you are going to get hurt."

If Jones does get hurt this season, be it in game-action or practice, the only thing that changes is the perception.

To those passing judgment, getting hurt in an actual game is somehow superior to it happening behind the curtains at a practice. And if you’re actually in that camp, step back and do some contact tracing on that logic or better defined, lack thereof.

"I don't think we're going to throw [Jones] into any Royal Rumbles or anything like that," Judge explained while giving the WWE a free plug."But at some point, we'll pop his pads a little bit in a controlled environment. Maybe that's with a young guy who understands kind of hitting him a little bit."

Remember, in a non-pandemic summer no one would have an issue with Jones getting his pads popped in a preseason game. As an emerging second-year player, a series or two in Game 1 would be an acceptable convention, maybe a quarter in the second preseason game, and then a half and perhaps coming out in the third quarter of the dress rehearsal wouldn’t even generate a blink of an eye.

In other words, Jones would typically be facing far more pad-pooping had COVID-19 never existed, but because Judge is even contemplating trying to replicate a little portion of that on a practice field, he’s an “old-school” lunatic to some.

"I'm not in a hurry to go ahead and just beat the hell out of him," Judge said. "But at some point, we'll prepare his body for what he may take in the first game."

History is not and will never be kind to Chip Kelly in Philadelphia, but not everything the former Eagles coach did was a disaster and one breath of fresh air was his disdain of inertia.

Kelly often told his staff that the only answer that wasn’t acceptable was: “because that’s the way it’s always been done.”

The goal was to get others thinking about potential innovation and not just always accepting the status quo.

Judge might be a disaster as the coach of the Giants but it won’t be because he never took his place at the end of a long line.

When effort strays from conventional wisdom, it’s often treated like madness in the moment. Ultimate success in such a path is labeled as genius, however.

What can be said proactively is fortune favors the bold and groupthink embraces the ordinary.

At least Judge is shooting his shot. His critics piling on are the humdrum, rubber-stamping indoctrinated orthodoxy.

Independent thought is endangered but it’s not extinct, at least not yet.