John McMullen: False positive tests are a real threat to the NFL this season 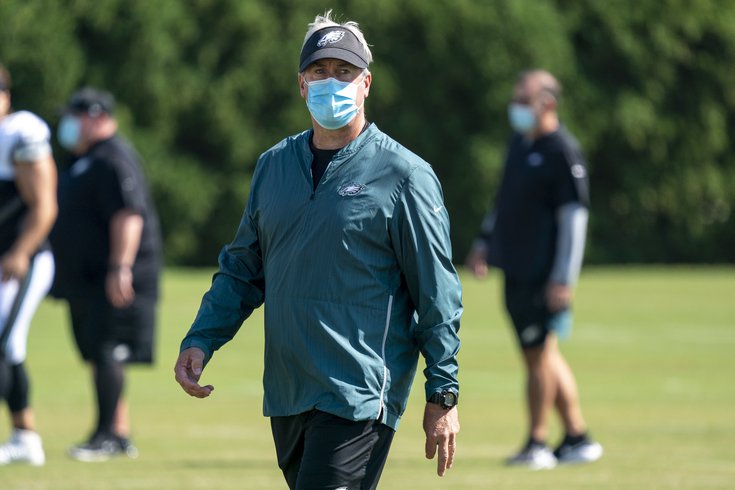 The NFL got a dry run it wasn’t counting on over the weekend when irregularities in COVID-19 testing popped up all over around the league. Buffalo general manager Brandon Beane told reporters nearly one-third of the league, “10 or 11” teams, were hit with potential false positives.

"Saturday's daily COVID testing returned several positive tests from each of the clubs serviced by the same laboratory in New Jersey," the league said in a statement. "We are working with our testing partner, BioReference, to investigate these results, while the clubs work to confirm or rule out the positive tests.

“Clubs are taking immediate precautionary measures as outlined in the NFL-NFLPA's health and safety protocols to include contact tracing, isolation of individuals and temporarily adjusting the schedule, where appropriate. The other laboratories used for NFL testing have not had similar results."

In Philadelphia, the Eagles had a total of nine players miss the last two practices with what was described as “illness.”

Receivers Jalen Reagor and Deontay Burnett, defensive end Shareef Miller and cornerback Rasul Douglas missed practice on Friday but were all back by Sunday. Saturday was an off day for the players and when they returned on Sunday, five players — running back Corey Clement, WR John Hightower, defensive end Vinny Curry, and defensive tackles Hassan Ridgeway and Anthony Rush — were absent with undisclosed illnesses.

The Eagles do use the BioReference New Jersey lab in question and are following the established NFL/NFLPA protocols, although the organization has not confirmed any false positives as many other teams have.

"This morning we learned yesterday's COVID-19 testing identified nine players/staff at positive," the Bears said in a statement Sunday. "We followed additional NFL/NFLPA testing protocol and confirmed all nine results as false positives. Out of an abundance of caution, we postponed this morning's practice to this afternoon at 1:30 pm (CT)."

The timing of all four Eagles out Friday being back Sunday with the understanding you need 24 hours away before being retested indicates false positive. A wholesale return of the other five would basically confirm the Eagles being in the same cluster of other teams revealed publicly like Cleveland, Chicago, Minnesota, the NY Jets, Pittsburgh and the Bills.

The fear was real with the Bears when coach Matt Nagy said he got the call just before 3:00 a.m. about Chicago’s nine positive COVID-19 tests. Nagy didn’t find out until later Sunday morning about the lab problems so the concern was that the team had a significant spread.

Bills’ starting quarterback Josh Allen received a false-positive test result and was forced to miss Sunday’s practice, one of six players from that organization who got false-positive test results this weekend. Allen is expected back on the practice field Monday which brings us to the elephant in the room — false positives in the week of real games, something which could not only limit preparation time but force stars to sit depending on the timing of the test, is a nightmare for teams and the league itself when it comes to competitive balance.

Earlier this month after Matthew Stafford’s false positive in Detroit, PhillyVoice.com contacted Dr. Andy O. Miller, MD, an infectious disease specialist at the Hospital for Special Surgery in New York, for clarification on these tests.

"The nasopharyngeal swab (all the way to the back of the nose) is probably the most accurate sample," Miller explained, "but there are promising tests using mid-turbinate nasal swabs (halfway back the nose), nasal swabs (front of the nose), and oral/saliva samples."

As Tier 2M media, this writer is tested every day at the NovaCare Complex with the mid-turbinate nasal swab, the same test the players get by BioReference and to date, there hasn’t been any positive test — false or not — but the concern meter certainly ticked up a notch on Sunday.

"They can be broken down into two types:" the doctor explained. "A “true” false positive (Patient has no virus, never had virus, and the positive test is just random). That seems to be very rare. A remnant of a prior infection. This seems common, unfortunately."

Miller explained it this way: "Someone has COVID-19, symptomatic or otherwise. The infection passes; they’re fine, and their body even produced antibodies. But the PCR test can remain positive – maddeningly – for weeks. Often it’s only intermittently positive – one day negative, the next positive – and almost always at very, very, very low levels of virus.

“These aren’t really false positives, but they are misleading because they almost never represent new, active, transmissible, contagious COVID-19."

In other words, some of these tests can detect the presence of remnants of the virus, even though someone fought it off days ago or even longer. From the test's perspective, it is correctly detecting small samples of the virus, but for practical medical purposes, the testee is not infected.

Forget about professional sports and the NFL, too many were sold a bill of goods that testing was the only way to restart society and they haven’t been educated that the tests themselves are far from perfect, which is why daily testing is such an important tool to clean up mistakes and that is only an available option for industries with the means to pull it off.

Before this hiccup, testing had been a rousing success in the NFL with over 100,000 virus tests since the start of training camps resulting in a positivity rate of far less than ONE percent. The sudden flood of positives after that success raised the red flag.

The NFL has conducted well over 100,000 COVID-19 tests since camp began with a positivity rate that's a fraction of 1% and dropping. A sudden flood of positives from different testing sites, all processed by the same lab, raises a red flag. https://t.co/UOuBGzL4LR

While all this was going on, not one NFL player was moved to the Reserve/COVID-19 list this weekend and at press time, only three out of nearly 2,600 are on the list.

Everyone — perhaps with the exception of BioReference — should be hoping for lab error to be the end result here, because the other side of the coin reveals the weakest link in this chain that is the 2020 NFL season — fear and overreaction to it.

Politicians often talk about settled science to steer followers to preferred dogma, but actual scientists understand that phrase is an oxymoron.

"You can’t always say that the confusion can be cleared up,” Miller said. “Sometimes – [you] need to do what is wisest and safest without perfect knowledge."

Make sure you follow the JAKIB Media Partners YouTube page for your daily dose of “Extending the Play,” the Eagles podcast that became an institution in South Jersey as the No. 1 local drive time segment in the market.
Now you can listen anywhere at any time on YouTube, Apple Podcasts and Spotify.