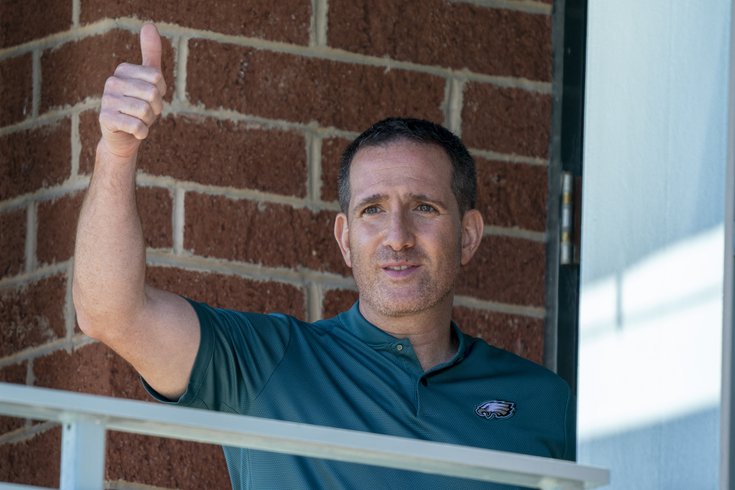 We're through the first week of Philadelphia Eagles training camp, so the first day off feels like an appropriate time to update our 53-man roster projection. Let's just get right to it.

After cutting Kyle Lauletta, who simply wasn't going to get any reps, the Eagles are down to three quarterbacks, all of whom are locks to make the team. Hurts is considerably more talented than Sudfeld, so it's really only a matter when, not if, he takes over as the No. 2 this season.

Clement has looked good early in camp, running hard and making catches out of the backfield. In my opinion, he has solidified his spot on the roster.

As for the other guys:

We'll project Holyfield for now, but the feeling here is that Howie Roseman will continue to look outside the organization for more running back depth.

The six guys noted above are all locks. Burnett has done some nice things in camp, but not enough so far to persuade the Eagles to keep 7 wide receivers.

There's a real opportunity for one of the young guys here to unseat Perkins as the TE3. Hasn't happened yet.

I just don't see much in the way of year-to-year improvement from Mailata, and now he has a pair of rookie offensive tackles to contend with in Driscoll and Wanogho. I can't see a logical path to the continuation of this project.

Herbig isn't safe either. On the plus side, the team has used him as their sixth lineman in jumbo sets, and he has gotten first-team reps at LG and RG when some of the older vets have gotten "maintenance days," however, he has struggled at times.

Juriga has been solid as the second-team center, and I can't say that I've seen any bad snaps from him through the first week. I don't think the Eagles will want to risk losing him to someone on waivers, so we'll have them keeping 10 offensive linemen for now.

It's really a toss-up for that fifth DE spot:

Toohill is the most intriguing of the bunch, in my view. He hasn't looked lost early on, which is good enough for me to keep him and his upside over guys like Avery, Ostman, and Miller.

Changes: Toohill in, Avery out.

Heading into camp, the feeling here was that Williams could maybe push Ridgeway for the fourth DT spot. However, Ridgeway has had his share of disruptive moments, while Williams has not.

Alex Singleton has a legitimate chance of cracking the roster as well, but it'll be difficult to fit him in.

Rasul Douglas has some positive traits. He has good ball skills, and he's a physical tackler. In another scheme, I believe he could be a solid contributor, and maybe even a playmaker. In this scheme that prioritizes versatility, Douglas is an outside corner only, and one that is susceptible to the deep ball.

A trade of Douglas or even Sidney Jones is a possibility.

The first four guys are locks. Arnold has been physical in camp, and it's only a matter of time, in my opinion, that he starts making plays on the football.

Riley has made some plays early in camp as well.