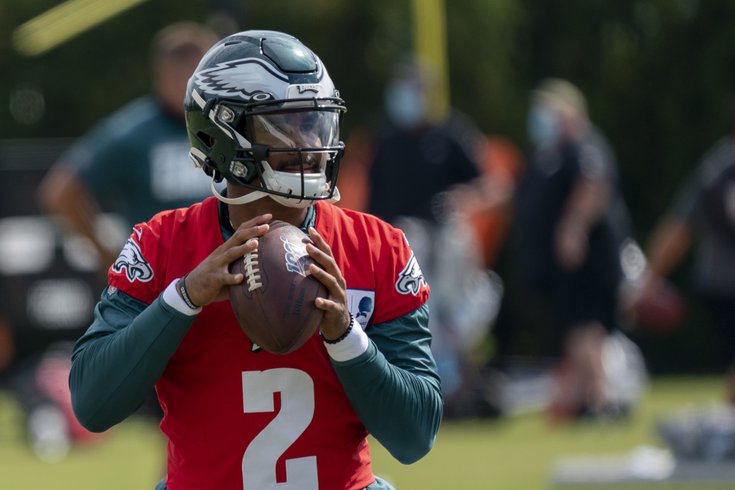 After their first day off on Saturday, the Philadelphia Eagles were back out on the field on Sunday for Day 6 of training camp practices. On Friday, there was tackling to the ground, and we tried to focus on the trenches. On Sunday, it was a non-padded practice, so we're back to looking at the skill position guys. Let's just get right to the notes.

• Jalen Hurts didn't get many reps in the scrimmage-like practice on Friday, but he did on Sunday, and he showed off a strong arm. We've seen Hurts run in practice, but we already knew he could do that. We also saw him throw some pretty deep balls, which you can see plenty of in his college highlight reels. But what we haven't yet seen him do yet is fire accurate passes into tight windows in the middle of the field.

Today, Hurts fit a laser in between Cre'Von LeBlanc and K'Von Wallace to Deontay Burnett. It was an extremely thin margin for error, but Hurts fit it in, and Burnett got up flexing after the catch.

Burnett has actually had a nice camp so far. Should one of the six "locks" at receiver (DeSean Jackson, Jalen Reagor, Greg Ward, J.J. Arcega-Whiteside, John Hightower, or Quez Watkins) go down with an injury between now and 53-man cutdowns, Burnett would be the next guy up to make the team, in my view.

Hurts does not look lost at all, like other rookie quarterbacks sometimes do. He has talent, and confidence, and it has shown so far through the first six practices. Really, that shouldn't come as a surprise. I mean, we're talking about a guy who played in more than his share of huge games at the highest level of college football. By comparison, training camp is nothing.

He has speed, a good arm, and confidence. That's a good start. The challenge for him will be finding consistency with his accuracy.

• J.J. Arcega-Whiteside had a strong day, and has looked legitimately improved from last year to this year. As Dan Orlovsky pointed out during the season, Arcega-Whiteside was often not where he was supposed to be on his routes, which led to some key incompletions.

It’s all over the tape-yall asked-here it is from the @Eagles WR and the lack of detail and the effect it has on the QB play... pic.twitter.com/vYdHREMlze

Throughout camp, he has done a better job using his body to shield off defenders and present a clearer target for the quarterback. This has been especially noticeable on the same types of slant routes shown by Orlovsky above.

Arcega-Whiteside also ran a great out-and-up route in the red zone against Avonte Maddox, but the pass to him went out the back of the end zone.

• There has been some level of concern over Darius Slay's first training camp with the Eagles, after videos of him giving up passes have emerged. I wouldn't be overly worried about it. Slay has won some, and lost some, with the losses typically coming in 1-on-1 or 7-on-7 situations, which heavily favor the offense.

As we showed in detail in May, there's little question that Slay can cover. He'll be fine. Today, he had a pick-6 on a Carson Wentz overthrow to Zach Ertz.

• We got to see Will Parks attempt to cover Jalen Reagor in a few 1-on-1 red zone reps. That didn't go well for Parks. Reagor was able to beat an overaggressive jam attempt by Parks, getting wide open thereafter, and later, he got yards of separation on an out-breaking route.

Good receivers should be able to dust safeties in 1-on-1's, so it's a good sign for Reagor that he was able to do that.

• We haven't mentioned Greg Ward much since the start of camp (mainly because you already know about him), but he was very active today. His highlight of camp came today when he was able to make a concentration catch near the sideline, with Nickell Robey-Coleman's arms in his face.

• We noted above that Burnett would be my seventh receiver, but not far behind is Marcus Green, who has some explosiveness. Green was a drafted player in 2019 (sixth round, Falcons) who Atlanta waived at 53-man cutdowns. The Eagles snatched him up, and he spent the entirety of the season on their practice squad. He's a little guy (5'8, 191) with some return ability (five return TDs in college).

On Friday, he beat LeBlanc for a big gain deep down the sideline. Today, he caught a number of passes from the slot, where he was able to consistently get separation.

• The surprise name among Doug Pederson's list of five young players who have stood out was Michael Jacquet, a bigger corner at 6'1, 203. Jacquet had a nice pass breakup in 7-on-7's in the the back of the end zone, in which he not only got a hand on the ball, but also sort of volleyballed it up in the air to give a teammate a chance at a pick. There were no other defenders there to make the play, but the sentiment was well executed.

• In 11-on-11's, one small moment that caught my eye was a play in which Casey Toohill, playing DE, covered speed demon running back Adrian Killins on a wheel route. As I saw the play developing, I figured Killins had himself an easy matchup to exploit, even if Toohill is a lot more athletic than your typical DE. Nope. Toohill blanketed him all the way down the sideline. Gold star for him when the coaches see that later on film.