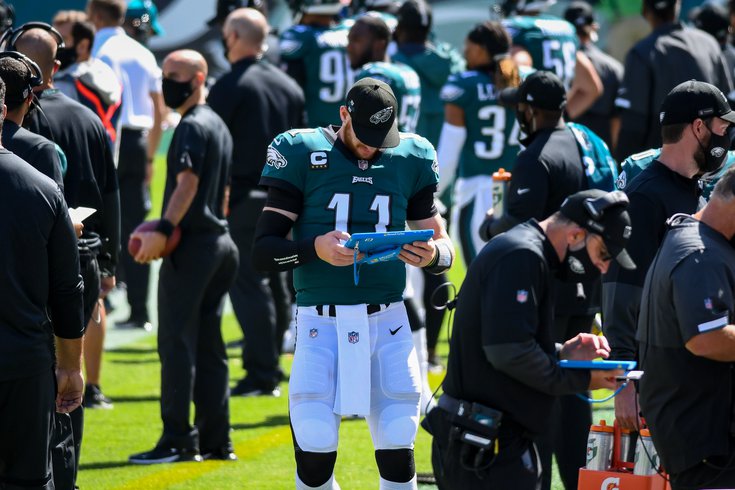 Carson Wentz takes a break after an INT to see how far the Eagles have dipped in the power rankings.

Here's where people around the country have the Eagles ranked after their second straight bad loss of the season. Oh, and here's our version of these sellout rankings, too.

Raise your hand if you thought Dallas Goedert would be leading the Eagles in targets (17), catches (12) and receiving yards (131) through two weeks? Yeah, me neither. His talent has long been evident, but given that he shares the field with one of the best tight ends in the league in Zach Ertz, it seemed like Goedert had a pretty well-defined ceiling. Well, he looks to be breaking through it.

#JimmySays: ESPN had surprise fantasy standouts as their theme for each team this week, hence the otherwise out of place mention of Goedert.

This team needs Carson Wentz to be at his best right now -- and that has not been the case so far. You understood Wentz's struggles more in Week 1, when a fierce Washington pass rush racked up eight sacks. But on Sunday against the Rams? Wentz wasn't sacked once, yet he still threw two picks and failed to put together enough positive drives to dig Philly out of an early hole. In the third quarter, with the Eagles in position to take the lead, Wentz fired an end-zone pass to J.J. Arcega-Whiteside, an ill-advised throw that led to a game-swinging interception by Darious Williams. Wentz needs to make better decisions than what we've seen during an 0-2 start.

#JimmySays: From game-to-game, this team has no shot if Wentz isn't good. Too much depends on him playing at a high level, which he has not come close to doing so far this season.

Carson Wentz looks like he’s regressing and his head coach is struggling to explain why. The Eagles were a team that looked far from in trouble just a season ago. Now, the outlook is far different.

#JimmySays: SI had the Eagles ranked 5th before the start of the season, so they have really changed course quickly. Also, I'll disagree vehemently that they looked "far from in trouble" last year. They were 5-7 at one point after a loss to the untalented and severely banged-up Dolphins, ffs.

Rampant issues here, but focus will intensify on struggling QB Carson Wentz, whose string of games with at least one TD pass ended at 20.

#JimmySays: The Eagles are obviously awful right now, but putting them behind a Lions team that has lost 14 of its last 15 games is a bit much.

The Philadelphia Eagles are in serious trouble.

When the Eagles blew a 17-0 lead last week against a bad Washington team, it was a glaring red flag. However, they were blasted by injuries on both sides of the ball, which could help explain away that dud.

The Eagles got some of those injured players back ahead of their home opener against the Rams, which should have helped them get back on track. Instead, they committed three turnovers and gave up 449 yards, while quarterback Carson Wentz finished 26-of-43 for 242 yards and a passer rating of 56.6.

The only thing standing between the Eagles and last place in the NFC East is the New York Giants. And with games against the San Francisco 49ers, Pittsburgh Steelers and Baltimore Ravens looming over the next month, Philly's season is perilously close to spiraling out of control... if it hasn't already.

#JimmySays: Yep, all that sounds about right. So shouldn't they be worse than 20th?

At some point, we have to ask how good Doug Pederson is. He was great during the Super Bowl season, but in hindsight, maybe then-Eagles offensive coordinator Frank Reich deserved more credit. Since then, the Eagles have underachieved. Had they not backed into a playoff spot each of the past two seasons, we’d be much more critical of Pederson.

#JimmySays: Pederson hasn't had a good season so far (#analysis), and some of the answers he gave in his Monday morning press conference weren't great, but he has been a good coach each of the last two years, and was masterful in 2017.

At 0-2, they have looked awful for two weeks. Is it possible to turn it around? The defense was terrible against the Rams.

#JimmySays: The defense was worse than the offense on Sunday. Jim Schwartz is lucky Wentz is catching most of the heat.