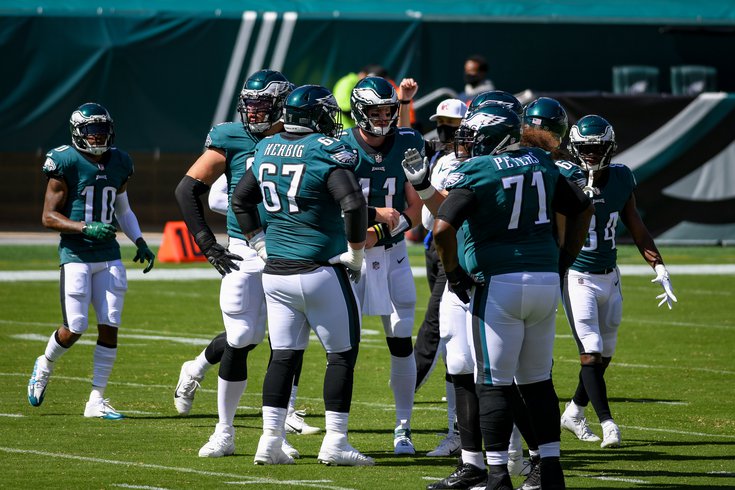 Can the Eagles bounce back from their 0-2 start with a win over the Bengals?

No one expected the Eagles to be heading into their Week 3 matchup against the Bengals still looking for their first win of the season. But here we are.

The first three weeks of the Birds' schedule was supposed to be one of their easiest stretches of the season, and if they can't figure out a way to beat Cincinnati, they'll be 0-3 as they head into a three-game stretch that includes matchups against 49ers (who might actually be more injured than the Eagles), the Steelers and the Ravens. That's not ideal.

But first, Philly must focus on the task at hand, and can't afford to look past what should be a very winnable game against a rookie quarterback and a suspect defense. It's a game in which the Eagles are favored (by five points according to TheLines.com's consensus odds), but they were favorites against Washington and the Rams as well, and we all saw what happened in those games.

Can the Eagles bounce back and pick up their first win? Or will they send the city into pit of darkness with their first 0-3 start since Andy Reid's first season in Philly (1999)? Oh, and by the way, Doug Pederson was the starting quarterback for the Birds that year before eventually being replaced by a rookie named Donovan McNabb.

As we do every week, let's take a look at who our writers are picking to win this matchup.

Continuing to pick the Eagles reminds me of the episode in Arrested Development in which we see a young Michael Bluth continuously being let down by his father, who had promised to take him fishing.

The Eagles are playing the Bengals in Week 3. Here's a reminder of how these franchises have been in recent years:

Joe Burrow is probably going to be pretty good. There are a few skill players to be wary of... but this is the best possible "lay up" match the Eagles could have to get them out of the doldrums. If they lose this one, all is lost.

I've picked the Eagles against my better judgement far too many times over the last few seasons. This is no longer the team that won the Super Bowl, and we need to stop treating them as such. Are they one of the worst teams in the NFL this season? They shouldn't be, but they've been playing that way so far this season, and we're going to base our pick off of that, not what they've accomplished in the past or what they may look like on paper.

The Eagles are down another offensive lineman in Isaac Seumalo and will be without first-round pick Jalen Reagor on Sunday, leaving an already struggling Carson Wentz with DeSean Jackson, J.J. Arcega-Whiteside and rookie John Hightower on the outside. At this point, a heavy dose of Miles Sanders appears to be their past path to a victory. But they also have problems on the other side of the ball as Fletcher Cox has missed practice each of the last two days.

The way things are going for me picking games this week, the Eagles will probably go out and rout the Bengals. If that's the case, then this was a reverse-jinx situation, OK? Cool.

The Eagles have stunk, but I think the Bengals stink more. If Wentz can’t put up points against this defense, they might as well pack it in for the year.

This is a statement prediction. I don’t think it’s going to end 2-0. If it does, I’ll walk naked down Broad Street, which I think we all agree NO ONE WANTS! I also don’t think that the Eagles are much better than the Cincinnati Bengals. The Bengals are 30th in the NFL against the rush, giving up an average of 185 yards a game, so that says it’s going to be a Miles Sanders’ day for the Eagles.

The flip side of that is the Eagles are giving up 32 points a game, which is 26th overall in the NFL. Another interesting stat is that the Bengals blitz 39.7% of the time/per drop back, which is the fifth-highest rate in the NFL. Can Carson Wentz handle the pressure?  The Eagles are 30th in the NFL in offensive drives ending in a score (28%). Only the woeful New York Jets (27.3%) and Denver Broncos (25%) are worse. Can the Eagles successfully close drives?

The Eagles are a quaking, cracking ship. But they’re not as bad as the Bengals. If the Eagles lose this, their season is done. And they know it.

MORE: Checking in on the Eagles' playoff odds and player props heading into Week 3

Eagles win their first game of the season, but do they cover the (as of now) -4.5-point spread? This game has been bet down two points depending on where you see it. The belief is that the Eagles are so bad they can’t even cover a touchdown against the Bengals. That’s right. They really can’t cover that line against anyone. The line dropping significantly helps Philadelphia, as they win the game 37-31. Backdoor Burrow is going to lead one final scoring drive and they will miss the onside kick.

Fool me once, shame on you; fool me twice, shame on me, Fool me three times and I'm a glutton for punishment and that's where we are.

The pick this week is more against the Cincinnati Bengals than for Philadelphia.

The Bengals are obviously still in the middle of a rebuild but have been more competitive through their own 0-2 start with rookie quarterback and No. 1 overall pick Joe Burrow showing poise and a tremendous upside. Like the Eagles, however, there is no identity just yet.

Cincy is ranked 26th in total offense and No. 22 in defense in the small sample size of the 2020 season and the only thing they've done well is stop the pass but that could be a chicken and egg existential question because the team is No. 30 in run defense, meaning it's time for Doug Pederson to build the foundation of his own identity on Miles Sanders especially with Jalen Reagor headed to injured reserve.

In theory Philadelphia should be somewhat prepared for Zac Taylor's offensive scheme, considering he interned under Sean McVay, who torched the Eagles defense last week, and Taylor's brother Press is Pederson's passing-game coordinator. The Bengals, meanwhile, simply don't have the talent to pull off what McVay is doing with the Rams, at least not yet.

On the other side of the football, the Eagles need to get Carson Wentz right and the defensive line this week isn't bringing any Chase Youngs or Aaron Donalds to Lincoln Financial Field so perhaps the dinged-up Philadelphia offensive line can get a little bit of  a breather, especially if Geno Atkins remains sidelined with a shoulder injury.