Plus, why I'm rooting for the Phillies to lose all their remaining games this season. Yup, it's getting dark in Philly sports. 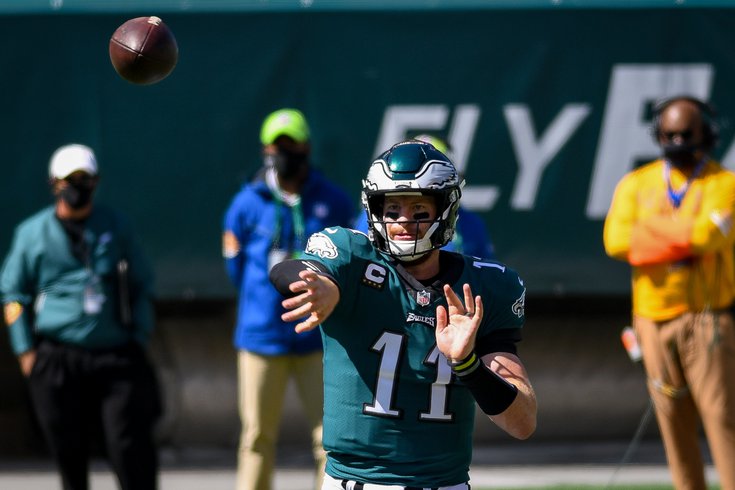 The immediate connotation of the phrase "one-hit wonder" is negative. Clearly anyone with only one hit – as amazing as that song may sound – was never talented enough to really do anything with it. While that may be true for the majority of artists who wear that unfortunate title, there are a couple of exceptions who break through, creating a new category – the two- or three-hit wonder.

Here is where we find Carson Wentz. He gave us the amazing single – the MVP season in 2017 – that caught fire. It was the anthem, the summer jam, the single that sold a platinum album. So naturally we expected another gem. Unfortunately, it’s just been a departure from that one song and album.

While 2018 was marred by injury, his follow-up album came up pretty short. We were left asking what happened to the guy who gave us one of the most popular tracks of the year. We heard the whispers, “Another one hit wonder…” and maybe started to believe it.

Then came last year, where he delivered a major comeback album, even with another hit single. The album just wasn’t quite masterful like the 2017 one. It simply left us wanting more. The hot single – that being Wentz playing awesome despite nobody around him – elevated the Eagles quarterback back into the “two- or three-hit wonder” discussion. But it still left us wanting a couple more elements. If he just had Kanye West produce a track, or got Taylor Swift on to sing a hook, or had better production on the video, that would have been enough.

Instead, we find ourselves listening to this year’s album. It was hyped up a bunch. Based off of last year alone there was expectation that Wentz would have fixed those issues. But that’s just not the case. No Kanye. No T-Swift. Nothing. Just a confused face as you struggle to get through the first two tracks of the album. Looking down at the rest of the track list and there isn’t even a major feature. Buckle up, this might be a bumpy listen.

I asked on Twitter who are the best 2/3 hit wonders of all-time. See if there are any answers that match a fit with Wentz...

Gimme an artist/group that was a 2 or 3 hit wonder. Preferably one good song on the first album then a good to decent song on the second album. Best answers will make this week's column for @thephillyvoice

Phillies need to burn it down

I hope they lose every single game.

This isn’t about actively rooting for a team to lose. Nobody should ask you to sit down on your couch and be upset when Bryce Harper hits a home run. I certainly wouldn’t suggest you boo Aaron Nola as he mows down yet another strikeout victim.

Rooting for our teams as they play is as ingrained in our DNA as really anything else in this city. Even when they tell you they're losing on purpose, people still show up to games. No, this isn’t about rooting against the Phillies when they play, rather being happy about what a loss brings.

For every game in which this bullpen blows a lead, or the bats fall silent, or the defense self-destructs, we get closer to the firing of Matt Klentak. Each time Nola or Zack Wheeler pull one out, or the bats come alive, or the bullpen doesn’t blow it, we get closer to the playoffs. So, yep, I would rather them miss out on the playoffs if it means Klentak is gone. In fact, I’m even rooting for it.

This isn’t even a difficult choice at this point, it’s a shortened season with nothing truly at stake. The team was so poorly constructed from the back end that even a hot lineup couldn’t overcome pitching issues. If they couldn’t get a stellar outing from one of their top two starters, it became increasingly laborious just to stay in games.

MORE: Forget everything else, J.T. Realmuto debacle should be enough to get Matt Klentak fired

What are we really talking about? Getting hot during a 60-game stretch wouldn’t even be a considerable amount of games to carryover for next year, meaning you couldn’t really extract much good from this season, knowing it would be in a limited scope with minimal data. However, losing games the way the Phillies have been finding ways to – by the hand of everyone in the bullpen – doesn’t magically go away if you add another 100 games on the schedule.

Just look at what this guy thinks about the prospects of re-signing the best catcher in baseball!

#Phillies GM Matt Klentak on JT Realmuto: "We would love to have JT but when you make that trade, you're trading for 2 years of control & you know that. So, Sixto looked really good against us. He's looked good this year. But we've had 2 very productive years with JT as well."

This is just so difficult to watch, knowing that making the playoffs means he’s back in the saddle. I’m not worried about who steps in, mainly because I need Klentak out first and foremost. I’m rooting for it, but not in the way you may think.

It’s actually quite simple. Before every game, just speak out loud – to yourself or anyone else in the room – about how vital it is to replace Klentak. Explain to everyone in the room the only way to solidify this is by the team not making the playoffs. At that point, there is now a moratorium on rooting against the Phillies, as they are playing baseball. Once they lose, you may resume your excitement over Klentak's impending departure.

Now it’s on you to remind everyone that this is a short season worth nothing, and that front office change is the only true goal of this year. Have fun!

FanDuel currently has the Eagles at +240 to win the NFC East, according to TheLines.com. I know, I know, there's hasn't been a back-to-back winner in 17 years. But if there was ever a season where a trend will break, it has to be this one. It’s 2020 for goodness sakes! Here’s the reality of where we sit watching an 0-2 team; they really aren’t that bad. The lack of preseason has added extra stress on players, and we’ve seen an increase in injuries. Dallas is already dealing with a couple at both LB and OL.

I wouldn’t dump the mortgage payment on this bet, but it’s worth at least a unit. Teams are still figuring out their identity, and there are way too many variables in this unique season to write off Philly this early. The only reason the Cowboys even won is because they were the first team to recover an onside kick in five years!

Episode 2 in the books for Props & Locks on Fox29! Catch the third episode this Friday night at 10:30pm with myself, Scott Grayson, and the always entertaining Sean Bell! We will be loaded with props for the Eagles game and break down two other big value matchups this week. Starting on 10/8 we will move to Thursday nights at 7pm.

There is also another HUGE announcement coming that will be part of what I am doing here on PhillyVoice.