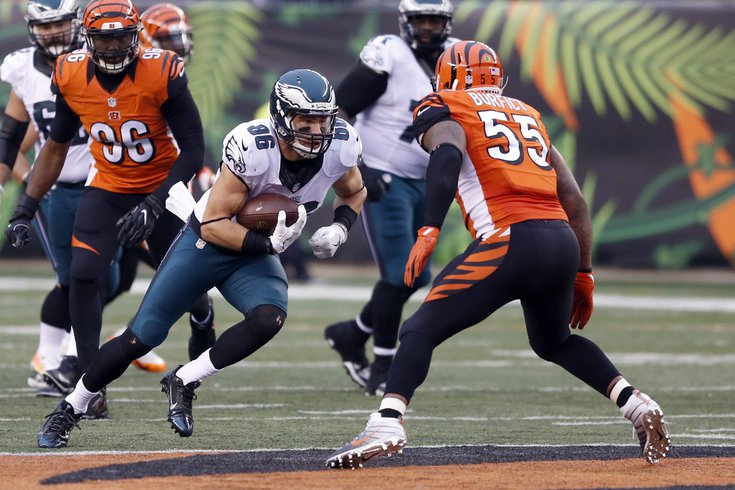 For the gambling enthusiasts, here are my Week 3 NFL picks. To note, the team logos indicate who I think will win the game, not cover the spread. At the end of the picks, I'll note a few teams that I like based on the spread. All the below spreads are courtesy of the consensus Week 3 odds at TheLines.com.

Dolphins at Jaguars (-3): Last week on Thursday Night Football we got Bengals-Browns. This week, Dolphins-Jags, and peeking ahead to next week... Broncos-Jets. Ugh.

Bengals at Eagles (-6): Continuing to pick the Eagles reminds me of the episode in Arrested Development in which we see a young Michael Bluth continuously being let down by his father, who had promised to take him fishing.

Bears at Falcons (-3): I've been itching for the first opportunity to bet against the Bears with any sort of team capable of winning football games. The Bears are 2-0, but they have not looked good, going down to the wire against the garbage Lions and Giants. Meanwhile, the Falcons are 0-2 and they are coming off one of the biggest choke jobs in recent memory, but they have at least demonstrated the ability to score points, and Matt Ryan has been legitimately good so far. I wondered if this line might be higher, but I'm a buyer at -3.

Rams at Bills (-2): The Bills have a couple of speed guys in Stefon Diggs and John Brown, which means that the Rams' defense is going to play that same foofy scheme in which they'll give up underneath stuff all day, as long as they don't get beaten over the top. The Eagles should've shredded that nonsense. The Bills will have more success against it.

Football Team at Browns (-7): If I'm the Browns, I'd be concerned about my offensive tackles against the Football Team's edge rushers in this matchup, but they're really solid on the interior, so they can give extra help to the tackles. Otherwise, the Browns are just a far more talented football team.

Titans (-2.5) at Vikings: Carson Wentz is getting all kinds of heat in Philadelphia, but Kirk Cousins has been at least equally as bad. Through two games, Cousins is 30 for 51 for 372 yards, 2 TDs, 4 INTs, and a 61.9 QB rating. It doesn't get any easier against a good Titans defense.

49ers (-4) at Giants: As we noted in the hierarchy this week, the Niners' injury report is out of control, via David Lombardi of The Athletic: 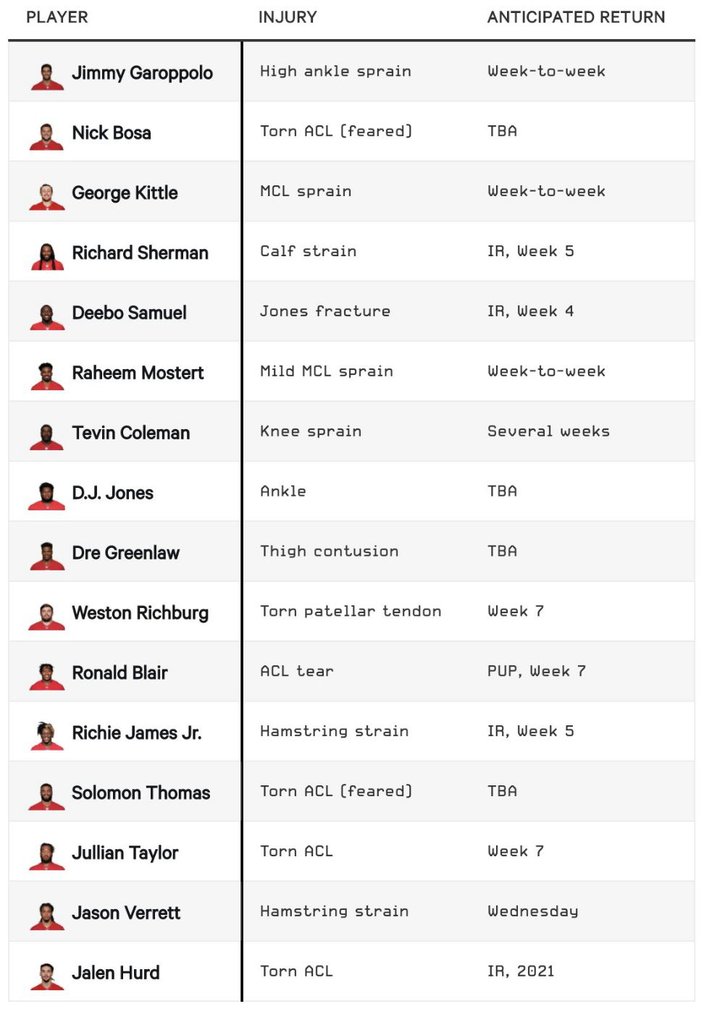 Still, the Giants losers, and I have no intention of picking them to win a game until they prove they aren't losers.

Texans at Steelers (-4): The Texans have the worst point differential in the NFL right now, at -31, though in fairness, they had the misfortune of facing the two best teams in the NFL already, in the Chiefs and Ravens. Who is the evil schedule maker that made them face the Chiefs, Ravens, and Steelers the first three weeks, two of which were on the road? Good Lord.

Anyway, this team is desperate for a win, and while I think the Steelers are a much better team than they were last year when they were rolling out a pathetic pair of backups in Mason Rudolph and that duck guy, they're not so improved that they almost lost to Jeff Driskel last week. I believe in Deshaun Watson to stop the bleeding, so give me Houston, outright.

Jets at Colts (-10.5): I'm a little wary of trusting the Colts to keep me alive in a survivor pool, seeing as they were heavy favorites Week 1 over the Jaguars, and lost. But the Jets are just so, so, so bad.

Panthers at Chargers (-6.5): I'll give the Panthers credit for hanging reasonably close in each of their first two games, but they're not going to win many games this year. That doesn't mean that I trust the always dicey Chargers, but this is still a pretty easy call.

Buccaneers (-6) at Broncos: The Bucs aren't special, but the Broncos are without Von Miller, Drew Lock, Courtland Sutton, A.J. Bouye, Phillip Lindsay, and a bunch of other guys.

Lions at Cardinals (-5.5): This is an interesting line, that indicates that oddsmakers feel that that Cardinals are a "good-ish" team, as opposed to a legitimate Super Bowl contender. I lean more toward believing that they are the latter, and that they'll easily handle the bad teams on their schedule this season, like they did last week against the Football Team. After two impressive wins to start the season, I'll be riding the Cards as long as their lines are reasonably low.

Cowboys at Seahawks (-5): The Cowboys could be sparked by their insane comeback Week 2, so I like them on the intangible side here, and 5 points is a nice, meaty number. I'll bite. Give me the Seahawks to win, but I'll take the 5.

Chiefs at Ravens (-3.5): If you're of the mindset that 3 points go to the home team, then this line indicates that the oddmakers believe that the Ravens are better than the Chiefs, especially given the fact that there will be no fans in attendance. I believe the Chiefs are better, and so, taking the 3.5 points is the logical move, for me anyway. I'll also take them to win outright.