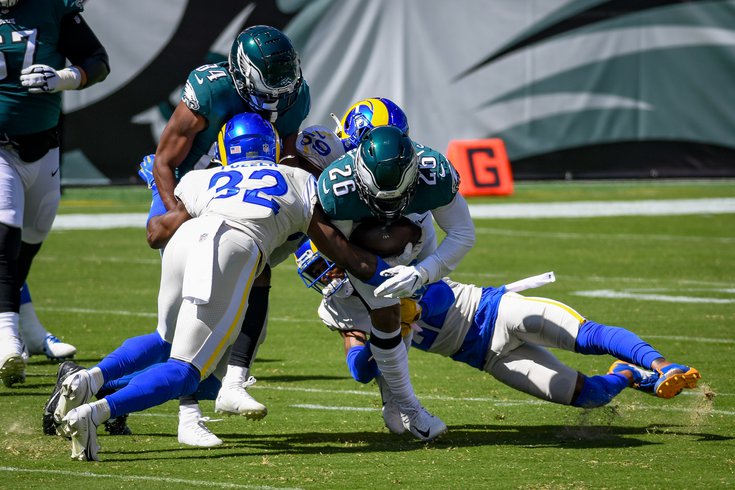 Running back Miles Sanders gets tackled during the Philadelphia Eagles' loss to the Los Angeles Rams.

The Eagles are 0-2 on the season, and have only rallied from a start like that to make the playoffs a couple of times in franchise history, with the last time being in 2003. That's the bad news for Philly fans.

The good news is that, despite a slow start that currently has them in the NFC East's basement, the division title is certainly not out of the question. Washington is 1-1 and atop the East, just as everyone expected. The Giants are 0-2, and just lost their best player for the season. And the Cowboys should be 0-2, but come into Week 3 with a 1-1 record because the Falcons apparently forgot how onside kicks work.

In other words, the Birds are just a game off the pace in the division. But they'll need a massive turnaround — and their injury situation to have an even bigger turnaround — if they hope to still be in this conversation once it starts getting cold outside.

As we do every week, let's take a look at the latest future odds and player props from TheLines.com, from postseason chances to award winners and season stats as we turn the page to the Eagles' upcoming matchup with the Bengals, a game in which the Birds are currently favored by 5.5 points.

After their Week 1 loss to Washington, we saw the Eagles' Super Bowl odds take a massive hit, as they dropped from their preseason number of +2000 (6th best in the NFL) to +2600 (13th). Therefore, it shouldn't come as any surprise that their odds continued to tumble after Sunday's loss to the Rams. According to TheLines.com, FanDuel has the Birds at +3300, good for 16th in the NFL. Bet Rivers, meanwhile, has them at +4000 (17th).

Their odds to win the conference and represent the NFC in the Super Bowl also took a similar hit, with the Birds falling from +1300 (7th) to +1900 (10th) since Sunday's loss.

As for their division odds, they saw the smallest drop there, for all the reasons we mentioned above. They remain with far and away the second best odds to win the division at +240 according to FanDuel. The Cowboys remain the favorites at -210.

Here's a look at how the Eagles odds have been trending dating back to before the season started.

Now, let's move on to some individual award odds, like MVP, Offensive Player of the Year, and Rookie of the Year.

The only Eagles player entering the season with even a shot of winning the MVP award was Carson Wentz. And through the first two weeks, he's statistically been one of the worst quarterbacks in the NFL. After throwing four interceptions through his first two games, Wentz is already halfway to his total from each of the last three seasons (7). And that's just the tip of the iceberg.

Miles Sanders entered the season with his name listed among the candidates for Offensive Player of the Year as many were expecting a breakout season from the second-year running back and Offensive Rookie of the Year finalist from a season ago.

But after missing the season opener with a hamstring injury, he saw those odds drop all the way to +8400. Those odds haven't moved much despite a solid showing in Week 2, likely because the state of his offensive line, and the rest of the team in general, remains in shambles. Currently, Sanders is +9000 to win OPOY honors at FanDuel and +8000 at Bet Rivers.

And then there's Jalen Reagor, who had a big play in Week 1 but an overall lack of involvement led to him falling from +2800 (preseason) to +3300 in Offensive Rookie of the Year odds. That's where his odds still remain at FanDuel, but his shot at winning the award all but evaporated on Wednesday when it was revealed he suffered a torn UCL against the Rams and will likely go on IR with the hope being that he can return after the Eagles' Week 9 bye.

Before the season, I took a look a five over/under stats from TheLines.com and took a stab at predicting if the Eagles would exceed their listed milestones. Here's where they currently stand after two weeks:

[Note: For comparative purposes on the percentages, the Eagles are currently 12.5% of the way through their season, so if a player is above that, they're on pace to exceed their total.]

That's actually pretty impressive for Sanders, given that he missed the opener entirely. If he plays every game the rest of the way, he's currently on pace for 1,965 yards from scrimmage. Small sample size, we know.

After throwing a pair of touchdowns in the opener, Wentz failed to throw one against the Rams. He did run one in, however that doesn't help his case here. He's still not that far off his projection, and throwing three against the Bengals this week would put him right back where he should be. But after what we've seen from him so far, that's hardly a guarantee.

Reagor was another player who, like Wentz, outpaced his projection in the opener. And then continued to remain ahead of his projected pace. Unfortunately, the Eagles rookie will be out for the foreseeable future and will likely only wind up playing in 8-10 games this season, so this is almost a guarantee to hit the under at this point. It's really a shame, since he was already ahead of schedule despite only catching five passes so far this season.

Ertz didn't catch a touchdown on Sunday, but his score from Week 1 was enough to keep him on pace for the over this season.