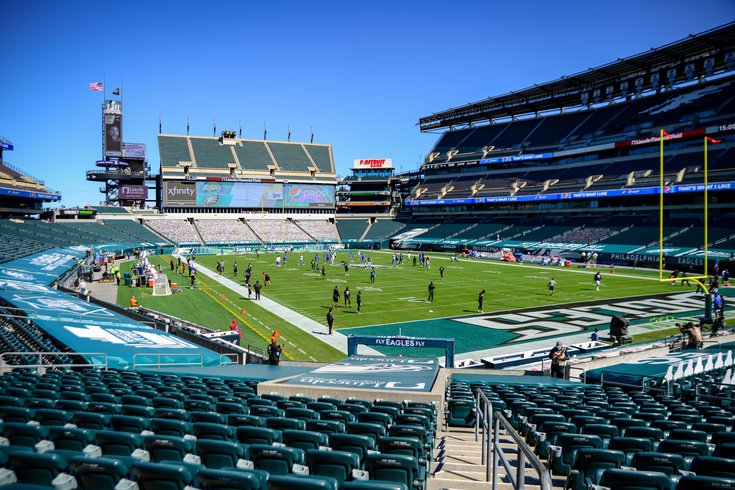 An empty stadium before the Philadelphia Eagles game against the Los Angeles Rams at Lincoln Financial Field in Philadelphia on September 20, 2020.

The Eagles have taken another step toward the possibility of admitting some fans at home games during the 2020 season.

The team announced Wednesday that it has received GBAC STAR accreditation from the Global Biorisk Advisory Council, which certifies stringent protocols for cleaning, disinfection and infectious disease prevention.

"This accreditation is a big step for us because it further validates our ongoing commitment to providing a safe, clean and healthy environment at Lincoln Financial Field," said Jason Miller, senior vice president of operations. "We are grateful to have the support of the entire organization, including Jeffrey Lurie and Don Smolenski, who empower us to continuously seek out opportunities to showcase and certify our stadium."

The Eagles began the accreditation process in April as the coronavirus pandemic hit a peak in the Philadelphia area.

Lincoln Financial Field was required to demonstrate compliance with the program’s 20 core elements, which range from standard operating procedures and risk assessment strategies to personal protective equipment and emergency preparedness and response measures, the team said.

In addition to the accreditation, the Eagles have installed hand sanitizer stations at locations throughout the stadium.

The Linc is one of just five stadiums that have received GBAC STAR accreditation. Three of the others — Arrowhead Stadium in Kansas City, AT&T Stadium in Dallas and Hard Rock Stadium in Miami — have permitted fans to attend in limited capacities during the first two weeks of the NFL season. CenturyLink Field in Seattle was accredited, but ruled out fan attendance for at least the first three Seahawks home games.

In the days following the Sept. 10 season opener between the Kansas City Chiefs and Houston Texans, Kansas City health officials revealed that 10 people who had attended the game entered quarantine after another fan tested positive for COVID-19. The fans who were exposed were seated in a box in the lower level of the stadium.

Health experts believe COVID-19 mainly spreads through respiratory droplets produced when an infected person coughs, sneezes or talks. People also may get infected by touching surfaces containing the virus and then touching their mouth, nose or eyes – but that's not believed to be the primary way the coronavirus spreads, according to the Centers for Disease Control and Prevention.

The Eagles announced in late August that fans would not be able to attend home games until further notice. The city of Philadelphia has maintained a cautious approach and has not signaled any plans to lift any of its restrictions, including a ban on tailgating and road closures surrounding the Stadium Complex.

In Pennsylvania, a federal judge ruled that a stay will not be granted to the state as Gov. Tom Wolf and other officials appeal a decision striking down limits on indoor and outdoor gatherings, among other COVID-19 measures.

The Philadelphia Health Department has said the court's decision does not pertain to any gathering restrictions that the city establishes on its own. Throughout the pandemic, the city has imposed tougher restrictions than the rest of Pennsylvania.

City officials did not immediately respond to a request for comment on whether the accreditation will impact the health department's views on fan attendance.