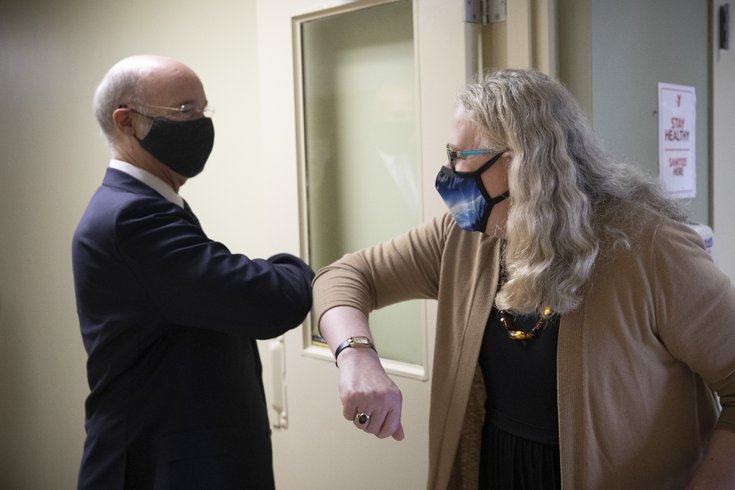 Pennsylvania Gov. Tom Wolf and Secretary of Health Dr. Rachel Levine, pictured above, imposed heavy restrictions on the state to combat the coronavirus pandemic. A federal judge has ruled some of those orders unconstitutional.

A federal judge ruled Monday that Pennsylvania Gov. Tom Wolf's restrictions imposed during the coronavirus pandemic are unconstitutional, siding with a group of plaintiffs who filed a lawsuit back in April.

In the months since the lawsuit was filed, many of the state's toughest restrictions have been lifted. At the time, Wolf's orders were consistent with similar moves made by governors across the United States.

Pennsylvania was among the states hit hardest during the first wave of the pandemic in the spring. The state has reported 145,063 COVID-19 cases and 7,869 deaths attributed to the virus as of Monday afternoon, ranking 12th and 8th in the country, respectively.

In the federal ruling, Stickman, an appointee of President Donald Trump, acknowledged that Wolf and Health Secretary Dr. Rachel Levine "undertook their actions in a well-intentioned effort to protect Pennsylvanians from the virus."

After reviewing the plaintiffs' various legal challenges, however, Stickman determined that the orders failed to meet standards that protect basic Constitutional rights.

"The Constitution cannot accept the concept of a 'new normal' where the basic liberties of the people can be subordinated to open-ended emergency mitigation measures," Stickman wrote. "Rather, the Constitution sets certain lines that may not be crossed, even in an emergency."

Among the restrictions that remain in Pennsylvania, bars and restaurants continue to face capacity limits and rules concerning how their customers can be served. Those laws were imposed in July to ward off a second wave of infections that surfaced across the state and the country.

It remains unclear how the judge's ruling could impact Pennsylvania's pandemic response moving forward. The Wolf administration is currently reviewing the decision, which can be read in full in the embedded document below.

It is expected that Wolf will seek a stay of the decision, keeping remaining restrictions in place during an appeal.

At an afternoon press conference, Wolf said the state has relied on expanded testing, contact tracing and certain restrictions in order to curb the spread of COVID-19. He noted that Dr. Deborah Birx, the leader of the White House Coronavirus Task Force, praised the effectiveness of measures taken against bars during the summer.

"There was a recent article from the CDC in the last week or so that highlighted the spread in restaurants and bars," Wolf said. "That (policy) was successful in terms of bending the curve and decreasing the amount of new cases. That was noted by Dr. Birx a week or so ago in how successful that was. This was with the support of the White House task force. Everything that limits our abilities in the tools we have is a challenge to public health."

As attorneys for the Wolf administration make sense of the decision, the governor reiterated that the state strongly advises against large gatherings. He also said Pennsylvania residents must continue to follow safe practices that reduce transmission of COVID-19.

"It's critically important, no matter what the court case is, that people follow these very important guidelines and are united in doing that to stop the spread of the virus," Wolf said. "We are all interconnected. We are all interdependent and related to each other in terms of the spread of this virus. We all have a collective responsibility to try to prevent the spread."