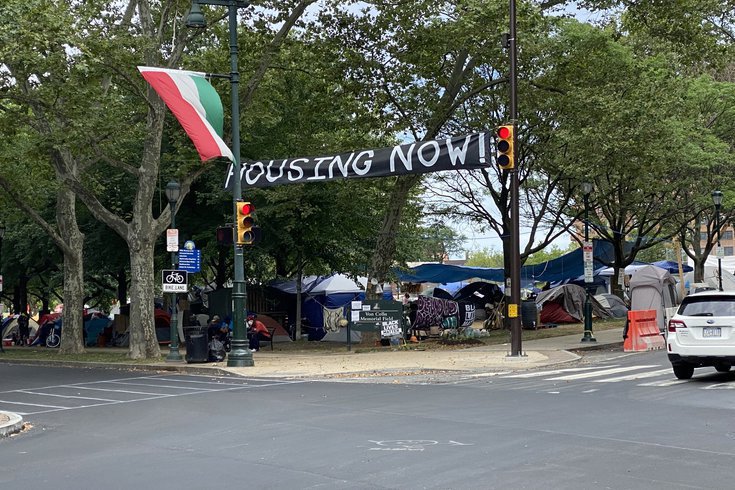 Philadelphia's homeless encampments on the Benjamin Franklin Parkway and Ridge Avenue have not disbanded after the city's Sept. 9 deadline. Mayor Jim Kenney said an amicable solution is still the goal, but other options are on the table.

After rebuffing the city's final deadline on Wednesday, the homeless encampments on the Benjamin Franklin Parkway and Ridge Avenue remained intact through Thursday, with little sign that a voluntary resolution is near.

Mayor Jim Kenney said Thursday that he still hopes to end the encampments amicably — even over several days, if necessary — but other options are being considered.

"This is going to be a multi-day operation," Kenney said.

Philadelphia officials are unsure how many homeless residents remain at each of the encampments. The sites have been barricaded by protest organizers, encampment leaders and activists who say they will not leave unless their demand for immediate, permanent housing is met.

Kenney did not rule out the possibility of bringing in police to dismantle the encampments, but declined to go into details.

"We continue to assess all of our options," Kenney said. "This comes in light of barricades and shields and hostile posture, and communications among certain protesters, as well as the serious health and safety concerns caused by the camps. At least one protester has publicly stated that they will use force, and we have evidence that the protesters are stockpiling supplies to aid in their resistance."

The city's priority is to maintain order and prevent wider violence from erupting out of a confrontation from the camps. Several stores in the area of the encampments have boarded up their windows out of concern for an escalating conflict.

At a press conference Thursday evening, the coalition behind the Parkway encampment condemned the city's "terrorization, intimidation and attempted manipulation" over the past few days.

Some homeless residents of the encampment repeated their frustrations with the city's shelters, calling them insufficient and inhumane, from problems with bedbugs to a lack of medical care and COVID-19 precautions. They also complained of bureaucracy and "years long" waiting lists that prevent them and their families from accessing city-run housing programs and homeless outreach services.

The organizers said the barriers at the encampments were erected to prevent violence and the use of police force, including tear gas, seen earlier this year during protests on Interstate 676. The city apologized for that incident over the summer and implemented a moratorium on the use of tear gas and other non-lethal munitions at peaceful protests involving passive resistance.

"The city is the one threatening us with violence," said coalition organizer Wiley Cunningham. "Not only in terms of sending in police to clear the encampments by force, but also by forcing homeless people back onto the streets with nowhere to go, no shelter and no sanitation in the midst of a global pandemic. The city's timeline for eviction is artificial, no one should have to leave this camp until they have been offered permanent housing that meets their needs."

As tension mounts around the encampments, Kenney said public pressure and media attention will not determine the city's timeline for police intervention.

"I'm not going to talk about strategy when it comes to police, nor a date or a time when it may happen," Kenney said. "I think that would not be in the best interest of our first responders and police to let that out before we do it."

To date, the city says it has assisted 142 homeless individuals from the encampments by placing them in shelters, residential treatment facilities, COVID prevention spaces and other service options suited to their needs. Further assistance has been hampered in recent days by the prevention of outreach workers from entering the encampments.

Resolving the standoff has been made especially difficult by the absence of any specific encampment leadership willing to stick to verbal agreements with the city, the mayor vented.

"We've met with scores of people over three months. We've had all kinds of requests that we've tried to fulfill. And when we fulfill them or pledge to fulfill them, then the requests or the demands change again, and the goalposts move further and further away," Kenney said.

The mayor insisted that Philadelphia's shelters are part of the solution, despite the demand for immediate permanent housing. While the city was willing to set aside 60 properties for encampment leaders to fix up through a non-profit, Kenney said the protesters were unwilling to accept that offer.

"The bottom line is that shelters are a pathway to permanent housing," Kenney said. "A lot of the people in those camps are either addicted individuals or people with mental health issues, or both. And you simply can't hand a set of keys to a house to a person who has all those additional needs. There's a process that we want to undertake."

As of Thursday night, the protesters say they will continue to pitch their tents and defend the encampments until the demand for safe, affordable housing is met by the city.

As Philadelphia's COVID-19 case counts continue to decline, the health department is prepared to loosen restrictions on outdoor gatherings.

The decision comes from the health department's evaluation of COVID-19 transmission during the past six months.

"We have few, if any reports, where it's clear that spread occurred outdoors," Farley said. "We have many examples of spread of the virus indoors, even in some very small gatherings. There's also, I believe, increasing evidence that the virus may be transmitted through the air. That means that the air movement that occurs outdoors would be protective."

The limit on indoor gatherings will remain at 25 people, consistent with guidelines across Pennsylvania.

While most infections now appear to be circulating indoors among relatives and friends, Farley said outdoor transmission through droplets is still a concern.

"Getting together in a crowd over snacks is still high-risk, even if it's outdoors," Farley said.

With the return of Eagles games this weekend, Farley said the best option will be to watch with household members, not groups of friends.

After reviewing Gov. Tom Wolf's pending policy to increase indoor dining capacity from 25% to 50% on Sept. 21, Philadelphia will not make that change at the same time. The health department will instead assess indoor dining in the city at 25% capacity and consider making a change some time in October.

Farley said it remains too soon to tell how well indoor dining is going since it returned on Monday. The city does not have an official count of the number of restaurants that providing this option to customers and has not yet collected enough meaningful data from inspections.

The health commissioner highlighted the city's progress in halting serious infections at the six-month mark since Philadelphia reported its first case of COVID-19.

On April 24, there were 1,881 people hospitalized for COVID-19 across Southeastern Pennsylvania. That number has declined more than 90% to just 175 as of Sept. 10.

Similarly, the city has only reported four new deaths since the last week of August, a decrease of 98% from the worst week in April, when Philadelphia's weekly death toll had reached 250 people.

More broadly, outcomes from the virus have been improved by the use of drugs such as remdesivir, dexamethasone and convalescent plasma. There has also been significant progress in vaccine development.

Farley said he believes more improvements will be likely in the months ahead.

"We expect to continue to gradually restart and reopen activities that we've restricted in the past, while continuing to re-emphasize safety, especially that people need to wear masks." Farley said. "We expect that there will be some temporary setbacks and reversals, especially as we get to winter, but the long-term trajectory is clearly towards returning to normal."

Philadelphia reported 77 new cases of COVID-19 on Thursday, bringing the citywide total to 34,886 since the start of the pandemic. No new fatalities were reported on Thursday and the death toll stands at 1,763.