Temple's COVID-19 outbreak appears to be slowing down, but parties still a worry 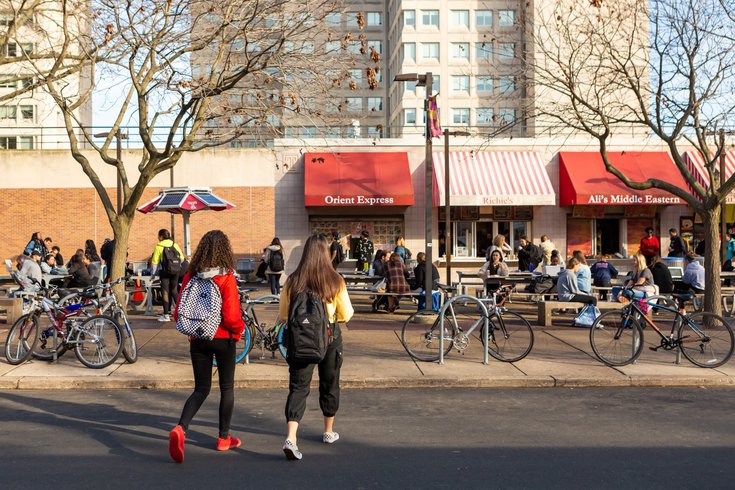 Temple University switched to all-online learning last week amid an outbreak of COVID-19 among students living on- and off-campus. Testing from the past weekend shows new cases are starting to decline. The image above is a file photo taken in March 2019.

"Case counts appear to be falling in the past few days," Farley said. "Temple conducted testing over the weekend. They did about 150 students per day, and they saw a decreasing percentage of students who tested positive each day."

At this point, there is no evidence of COVID-19 transmission from the population at Temple to the surrounding community in North Philadelphia, a fear Farley believed could be a "substantial risk" if the outbreak widened.

The university reported 282 active cases as of Tuesday afternoon, still a worrisome number if precautions are not followed.

"I'm very concerned by the potential spread at colleges here," Farley said. "Social gatherings appear to be the greatest risk. We continue to hear about parties that were reported to us by a number of students, where there's at least one student who tested positive. Several of those parties were organized by fraternities and sororities."

Even if parties are relatively small, Farley said they can result in "very rapid spread," especially when students are not wearing masks and gathered indoors.

"We're asking all the colleges in the area to do whatever they can to prevent these situations," Farley said.

The city maintains that whenever possible, students living on and near campus should try to return home safely, though there is no requirement for them to leave.

"We are encouraging students to go home rather than having a large number of people living off campus here in the city," Farley said. "However, that needs to be done very carefully, and we've given very specific guidance to Temple to disseminate to its students about how to do that so that they don't bring the infection home with them."

The guidance given to Temple includes having students get tested and quarantining for a period before leaving Philadelphia.

"Over the longer term, we do think it's safer if those students who don't need to be in Philadelphia go home," Farley said.

Tuesday marks the return of indoor dining, giving Philadelphia restaurants a chance to welcome their patrons inside for the first time since the spring.

Pennsylvania Gov. Tom Wolf announced Tuesday that restaurants across the rest of the state can move from 25% capacity to 50% capacity beginning on Sept. 21. Farley did not commit to the same change in Philadelphia.

"We will review the governor's policy change and consider what we'll do here in Philadelphia," the health commissioner said. "But the restaurants in the city of Philadelphia should not assume that we will just follow the governor's policy change here in the city. As the city that was hit hardest by this epidemic, we have been more restrictive than the state in a number of areas in the past. We will continue to be more restrictive if we feel it is necessary to protect Philadelphia restaurants.

Guidlines for indoor dining have been posted online by the city health department, which will be conducting routine inspections that include COVID-19 compliance as restaurants and theaters open. Residents who observe a business not following protocols are asked to call 311 to initiate an inspection.

"These are high-risk situations. That's why we have these precautions," Farley said. "We will take these standards very seriously."

A number of notable Philadelphia restaurants have closed permanently in the past several months. The survival of many others may depend on the safety and success of indoor dining, particularly as the cold weather returns and outdoor seating becomes infeasible.

Still, Farley said it is not fair to blame COVID-19 restrictions entirely when a restaurant fails. The restaurant business is "always high risk," he said.

"There are restaurants that close all the time because they simply failed to make it as a business," Farley said, "and it's not going to be possible to say that this one failed because of COVID, versus this one failed just because they couldn't make a living at that location given the service they do."

Cases hold stable across the city

Philadelphia reported just 43 new cases of COVID-19 on Tuesday, a low number likely reflected by a lull in testing over Labor Day weekend.There have now been 34,741 cases in the city since the start of the pandemic. No new deaths were reported on Tuesday and the death toll stood at 1,763, including 876 nursing home residents.

During the week ending on Sept. 5, Philadelphia averaged about 109 cases per day and a percent positivity rate of 4.2%. Both numbers were similar to the previous seven-day averages.

Farley said he remains very encouraged by the widespread use of face masks seen in the city.

"Our mask use numbers are looking very good," Farley said. "Last week, more than 90% of people in retail stores that we observed were wearing masks. That number is definitely protective. It's something we're very pleased to see."

As restrictions start to ease further, the health commissioner said that has always been the city's goal.

"We want to be as close as possible to normal operations here," Farley said. "And if we can do things safely, we will do that."

With the fall and winter months approaching, the course of the pandemic remains unknown. There is the chance that COVID-19 cases could increase, Farley said, because more things are reopening or because most respiratory viruses get worse in the fall. There's also the possibility there will be a decline as people learn to manage the epidemic and more people wear masks, he said.