Most cases appear to stem from off-campus housing 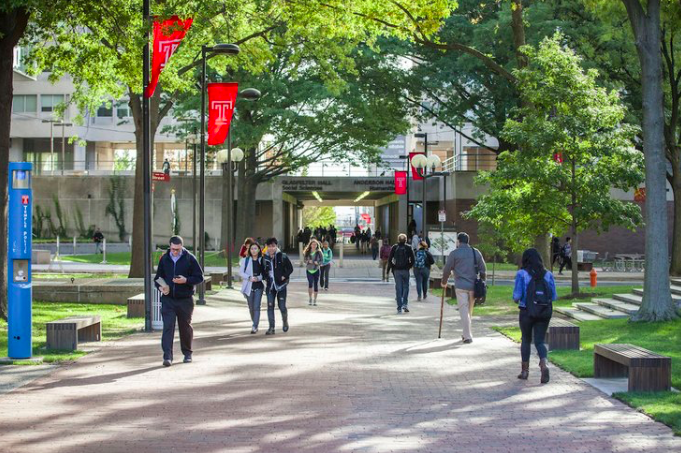 There is a 'substantial risk' that a COVID-19 outbreak at Temple University could spread to residents in the surrounding North Philadelphia neighborhoods, Health Commissioner Dr. Thomas Farley says. Above, a file photo taken before the pandemic.

A COVID-19 outbreak around Temple University's campus in North Philadelphia has the city's health department worried that students living off-campus may transmit the coronavirus to the surrounding community.

Temple has reported 127 COVID-19 cases since students returned late last month. To curb the spread of the virus, the university paused in-person instruction for a two-week period.

While the majority of active cases at Temple are classified as "on-campus," that does not necessarily mean those with the infection live on campus. It means that they were in a Temple facility at some point during the time they were infectious.

The city's health department has been actively involved in expanding testing both on-campus and around the university, Health Commissioner Dr. Thomas Farley said Tuesday.

On Sunday, the city conducted tests at an off-campus residential building where there were already three known cases of COVID-19. Among the 38 people tested at that building, 15 had positive results.

Yesterday, the health department tested 396 people on campus. Among them, 60 came back positive — about 15%.

"Overall, these numbers are concerning, and the rate of rise is even more concerning," Farley said. "There clearly is an outbreak occurring among Temple University students."

Contact tracing efforts conducted by the city suggest most of the exposure is occurring among students living in off-campus apartments, many of them in shared spaces.

Temple President Richard Englert said over the weekend that most of the university's cases are asymptomatic or mild infections. But city officials are concerned about the virus affecting vulnerable residents in North Philadelphia and beyond.

To manage the outbreak, the health department has updated its guidelines on social gatherings at colleges and universities in Philadelphia. The guidance now clarifies that gatherings of 25 or fewer people should not be considered safe, as some may have assumed based on the city's general limits on gatherings.

"You should assume that anyone around you is infected," Farley said Tuesday, addressing Temple students. "Stay in your room or stay in your apartment unless you have to go out for essential errands. Wear a mask when you're around anyone else. Otherwise, this outbreak could grow quickly, and it could threaten the rest of the campus and the rest of the city."

The health department is now working closely with Temple's administration to develop a longer-term plan for addressing the outbreak as the semester continues.

Philadelphia reported 131 new COVID-19 cases Tuesday, bringing the city's total to 33,909 since the start of the pandemic. Another two fatalities brought the city's death toll to 1,751, including 875 nursing home residents.

During the week ending Aug. 29, the city averaged 97 cases per day, with a test positivity rate of about 3.7%.

Farley noted that the newly reported cases do not include many Temple students who list their home addresses outside Philadelphia. Those cases will be added to the city's count as the university provides up-to-date information, including names and phone numbers of students for the health department to conduct contact tracing.

Still, among the new cases reported in Philadelphia on Tuesday, 32% were between the ages of 20 and 29.

"I think that large percentage does reflect the outbreak that's occurring at Temple," Farley said. “The number of new cases that we’re seeing on Temple’s campus is extremely worrisome."

The outbreak mirrors similar issues with COVID-19 at college campuses across the region and the United States.

"We're hopeful that some other colleges may be able to maintain it safely, but we're going to be very closely in touch with this and see if that's possible."

As the city moves to lift restrictions on indoor dining and theaters across Philadelphia next week, the health commissioner warned that the situation at Temple poses an additional threat of community spread.

"I'd say there's a substantial risk of that because many of these students are living off-campus," Farley said. "They're living in neighborhoods."