Clinical study could be a breakthrough for fatal degenerative disorder

The future of treatment for amyotrophic lateral sclerosis may be on the brink of a leap forward thanks to an encouraging experimental drug combination.

About 6,000 people in the United States are diagnosed with ALS each year, while roughly an equal number die from the disease. Most who are diagnosed lose their lives within three to five years of onset, which usually occurs in the fifties, but can develop at any time.

Dr. Terry Heiman-Patterson is the director of Temple University's Neurodegenerative Disease Center and the ALS Center of Hope, a foundation that raises money for specialized ALS treatment and research. She served as the center's principal investigator for the buzzworthy Amylyx breakthrough that raised the eyebrows of the ALS community this week, delivering results from a small phase 2 trial for AMX0035.

"This is real hope," Heiman-Patterson said of the drug combination, which was developed by a pair of undergraduate students at Brown University.

"ALS is a heterogeneous disease. It's not one disease," Heiman-Patterson explained. "There are many mechanisms that have been implicated, many ways that the motor nerve cell can die. There's cytotoxicity, oxidative stress, inflammation, proteins glomming up the works. Because this is a heterogenous disease, in any individual, one mechanism may be more operant than another. It may be that over the course of the illness, different mechanisms take precedence." 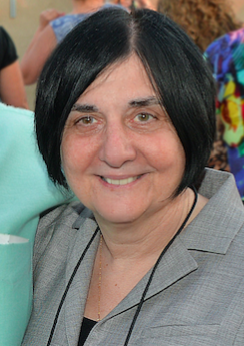 For clinicians who treat ALS, this is further complicated by the fact that there are no clear markers, for any individual, that indicate over time what specifically is causing the damage.

The six-month trial included 137 patients, five of them at Temple University Hospital. The data, published this week in the New England Journal of Medicine, demonstrated a measurable delay of functional decline compared to a placebo group. Both groups were already receiving other standard care treatments.

Researchers involved in the study, based out of the AMG Center for ALS at Massachusetts General Hospital, said the drug could represent a meaningful difference in a patient's life. It could delay progression for several more months, extending a patient's ability to write, type or cut their own food.

"Together, the two drugs are additive and even better," Heiman-Patterson said. "They actually enhance each other, so that together they're even more than the sum of the two. Instead of it being one plus one, it's three."

Heiman-Patterson has been working on ALS clinical trials for more than 35 years.

In 1995, the FDA's approval of riluzole was a big step forward, demonstrating the ability to modestly extend the lives of ALS patients by a few months.

But years went by before the next breakthrough came in 2017 with the arrival of edavarone (Radicava), which can give patients an extended window of functionality.

"Everything between riluzole and Radicava was negative trials," Heiman-Patterson said. "We are so pleased to have positive trials, finally."

This drug is safe. Drugs that have been safe in phase 2 trials and have shown any whisper of efficacy, or at least no worsening, there should be expanded access programs so that people in the here and now can get them while we move forward with further testing. – Dr. Terry Heiman-Patterson

The approval of Radicava stands out, in particular, because it stemmed from a similarly small clinical trial in Japan. The U.S. Food and Drug Administration gave the drug provisional approval without a phase 3 trial in the United States, allowing patients to receive the drug while additional studies continued.

That's the direction that ALS advocates want to go with AMX0035. The nonprofit I AM ALS already has urged Amylyx to submit an application for FDA approval, which would enable patients to access the drug through the "compassionate use" program until it gains formal approval.

Heiman-Patterson agrees, although she believes a phase 3 trial is important for further validation. About 19% of trial participants dropped out of the study due to side effects including nausea, diarrhea and abdominal pain. The improvements also were measured in biostatistics rather than patient-reported observations about the progression of their disease.

Based on experience, Heiman-Patterson knows that phase 2 trials can be a red herring.

But she is confident there is a justified path forward for AMX0035 to get provisional approval while additional testing continues.

"People now won't see the benefits unless we enact expanded access programs that are now being considered by Congress," Heiman-Patterson said. "This drug is safe. Drugs that have been safe in phase 2 trials and have shown any whisper of efficacy, or at least no worsening, there should be expanded access programs so that people in the here and now can get them while we move forward with further testing."

Heiman-Patterson and advocates for a range of other diseases are pushing for the passage of The Promising Pathway Act and the Accelerating Access to Critical Therapies for ALS Act.

The first bill would establish a real-time, priority review pathway at the FDA, while the second would increase the opportunity for patients to access investigational therapies outside of clinical trials. Those who take the drugs outside of trials would still contribute to an expanded knowledge base of the drug's effect on those who don't fit the parameters of the trial.

"It's akin to right-to-try, but a more controlled pathway," Heiman-Patterson said. "It gives us additional data in the non-trial population."

For Heiman-Patterson, treating ALS has been a lifetime's work, starting with a 38-year-old patient she treated at the former Hahnemann University Hospital. A married mother of two, the woman had lost the use of her arms and was preparing to go on a ventilator due to respiratory paralysis.

"She goes, 'So this is progressive? I'll never get better? I'll just continue to get weak?'" Heimann-Patterson said. "I went home that night. I was a newlywed. I said, 'This is it. This is what I've got to do with the rest of my life.'"

Years later, after countless studies that fell short, Heiman-Patterson again sees flurries of hope in ALS research. As a clinician and foundation leader, that means there's a chance for the people who come to her for help. A chance that they can survive longer and with a better quality of life.

"We're passionate about trying to care for patients who are in extremis," Heiman-Patterson said. "Each individual, there's something about every family that's affected by this that just breaks your heart."