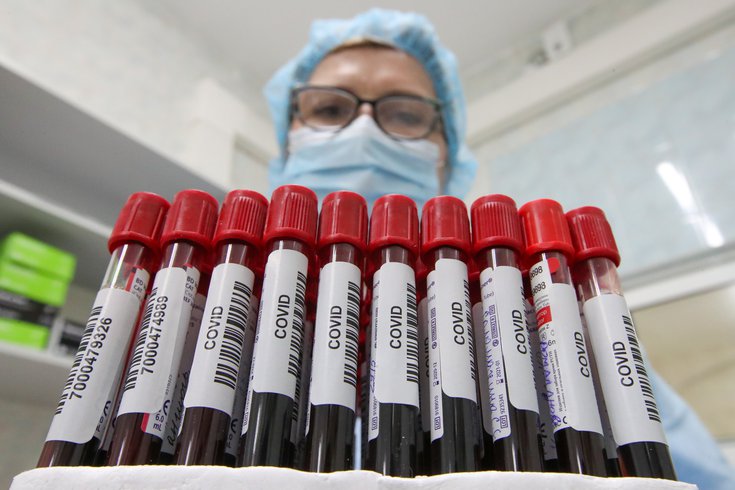 COVID-19 antibodies last at least four months, according to a study conducted by Icelandic researchers. Above, a health care worker holds vials of blood samples while conducting COVID-19 antibody testing in Russia.

Antibodies to the novel coronavirus can be detected at least four months after a person tests positive for COVID-19, according to the large study conducted in Iceland. It's a hopeful sign as scientists hurry to develop a vaccine.

Some earlier studies had suggested that the antibodies faded quickly, raising concerns about the effectiveness of any vaccine. But those smaller studies mostly examined the first 28 days after diagnosis.

Icelandic researchers found that a second, and more stable, wave of antibodies develops about a month or two after infection. Their findings were published Tuesday in the New England Journal of Medicine.

The presence of antibodies in the blood indicates that a person contracted the virus and may have some inherent level of protection. If they do, the question becomes whether a vaccine can trigger the same immune response and provide long-lasting immunity to the SARS-CoV-2 virus.

The latest findings offer hope that a vaccine is possible.

"The host immunity to this unpredictable and highly contagious virus may not be fleeting and may be similar to that elicited by most other viral infections," scientists from Harvard University and the U.S. National Institutes of Health wrote in an editorial accompanying the study.

The study, led by Reykjavik-based deCODE Genetics, examined blood samples from 30,576 people in Iceland. The samples collected came from people who tested positive for COVID-19, those who may have been exposed to the virus and people who had no known exposure.

A subset of 487 participants who received more than one antibody test showed that antibody levels tended to spike in the first two months, plateau and then stabilize.

The researchers also found that antibodies were greater in older participants and among those who had developed severe illnesses. Men had higher levels than women. Smokers had lower levels than non-smokers.

Though the findings are promising, there are many unknowns.

It remains unclear whether the antibodies protect against reinfection. There have been four confirmed cases of people being reinfected by the coronavirus, but it appears rare. There have been 25 million people infected worldwide.

It also isn't clear how many antibodies – or which type – are needed to confer immunity, or if every person will elicit the same immune response.