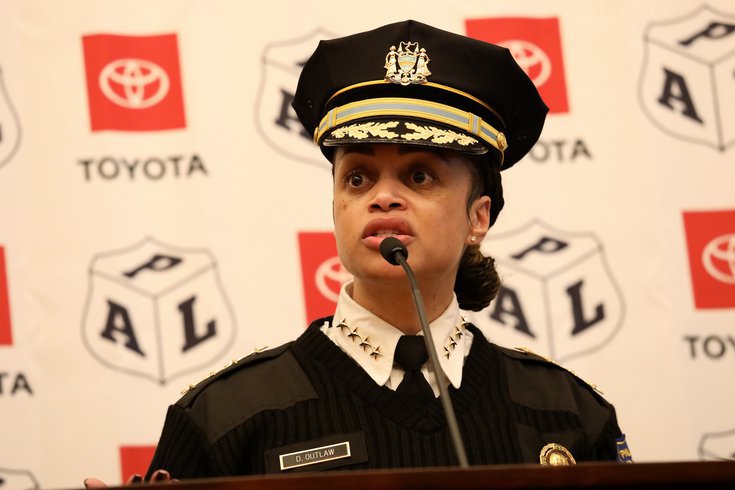 Philadelphia has placed a moratorium on the use of tear gas and other nonlethal munitions against peaceful protesters. Police Commissioner Danielle Outlaw, pictured above, apologized Thursday after reviewing evidence that demonstrated the department's use of force was excessive during a June 1 protest on Interstate 676.

Philadelphia Police Commissioner Danielle Outlaw admitted Thursday that she gave "substantively inaccurate" statements earlier this month about the department's controversial use of tear gas during a large protest on the Vine Street Expressway.

Outlaw now says the firing of tear gas at protesters on June 1 was an "unjustifiable use of force."

At a press briefing Thursday afternoon, the police commissioner said she was "sickened beyond description" by a widely shared New York Times video that analyzed the events leading up to the chaotic scene on the highway.

"I humbly apologize to those who were directly impacted, as well as to our communities at large," Outlaw said.

The commissioner announced a moratorium on the use of tear gas and other nonlethal munitions for those who assemble peacefully or "passively resist" police. Going forward, such force will only be used under circumstances involving armed and dangerous threats to police and the public.

Late in the afternoon on June 1, hundreds of protesters had packed onto Interstate 676, marking the third day of civil unrest in Philadelphia after George Floyd, an unarmed Black man, was killed by Minneapolis police.

Photos and videos from the scene showed protesters scrambling up an embankment to exit the highway as Philadelphia SWAT officers launched tear gas at them.

Police also used pepper spray, white smoke and pellets containing tear gas. About 24 protesters were arrested at the scene, including some who were seen being dragged down a highway embankment by officers as they attempted to flee.

On the night of the incident, Outlaw claimed that tear gas had been used to "safely diffuse a volatile and dangerous situation."

At the time, Outlaw said, she was led to believe that the protest had turned violent.

"The option of deploying tear gas was selected when it became evident at that time other options were not effective," Outlaw repeated in a separate statement regarding the June 1 situation.

Since then, dash-cam footage released by Pennsylvania State Police has shown that radio communication clearly described the protesters as "peaceful" during their march on the highway.

A incident involving a protester spray painting a state police vehicle had been reported by Philadelphia police as an officer being threatened, but the cruiser turned out to be unoccupied. That incident remains under investigation, Outlaw said.

After watching the New York Times video embedded below, Outlaw acknowledged on Thursday that her description of the protest earlier this month wrong and premature. A more thorough investigation into the timeline of events should have preceded her justification of the use of force, she said.

"I have personally viewed video evidence that largely contradicts the material portions of those statements," Outlaw said.

At the time, existing police department guidelines stated that tear gas should "only be used when absolutely necessary in violent situations — if and only if lesser methods did not stop the violent behavior." The same document also states that tear gas is not to be used on nonviolent individuals or to disperse crowds.

A health and human rights expert interviewed in the The New York Times video said that the police department's conduct put protesters at risk of being injured in a stampede and excessively exposed to tear gas and chemical burns.

While Outlaw at first defended the use of tear gas, the decision did not come directly from her. The incident commander who was onsite at the Vine Street Expressway protest admitted Thursday that he went over his boss's head.

Former deputy commissioner of special operations Dennis Wilson, who voluntarily accepted a demotion, said Outlaw had been clear with him about the protocol. Wilson was supposed to call the commissioner before any use of tear gas, but he proceeded that afternoon without her authorization.

"Things happened quickly. I didn't call the commissioner," Wilson said. "I gave the approval, and it was me and me alone."

The night before, in West Philadelphia, Wilson said he did call Outlaw and received her go-ahead to use tear gas in a volatile situation at 52nd and Market streets.

Wilson, who had been in his position for 3 1/2 years, will return to his former civil affairs role as chief inspector.

Mayor Jim Kenney expressed regret for his general approval to permit the use tear gas and other nonlethal munitions to respond to the protests. The choice was made reluctantly, he said, during the height of looting incidents across the city on May 30.

"I ignored what my insticts told me," Kenney said.

Still, the mayor accepted some blame for what happened.

"Even though I did not authorize the use of tear gas specifically for I-676, I should also be held accountable," Kenney said.

He added that he hopes the moratorium on tear gas becomes permanent.

Outlaw said the department's Internal Affairs investigation of the incident remains ongoing, and further personnel moves can be expected as facts come to light. An independent consultant also will be hired to comprehensively review the city's broader response to civil unrest.

At least one SWAT officer, who was not identified Thursday, will be fire from the department. Video showed him pulling down a woman's face mask to pepper spray her on the highway. Outlaw previously had called the video disturbing.

The commissioner, who took over the Philadelphia Police Department in February, admitted that morale is low. Amid the strain of the coronavirus pandemic, a spike in violent shootings and criticism for the response to protests, Outlaw said she still believes she is the right person to lead the police force.

"I am confident that we'll get to where we need to be," Outlaw said. "I think the most telling time for anyone within an organization, whether you're at the ground level or already all the way at the top, is how we stick through this together. We don't take our balls and go home. We have the difficult conversations and we really have to rip the band-aid off and be truthful and introspective about what we're experiencing here.

"There's nowhere else to go but up from here, so absolutely, I have the confidence that I am the one to get us through this," she said.