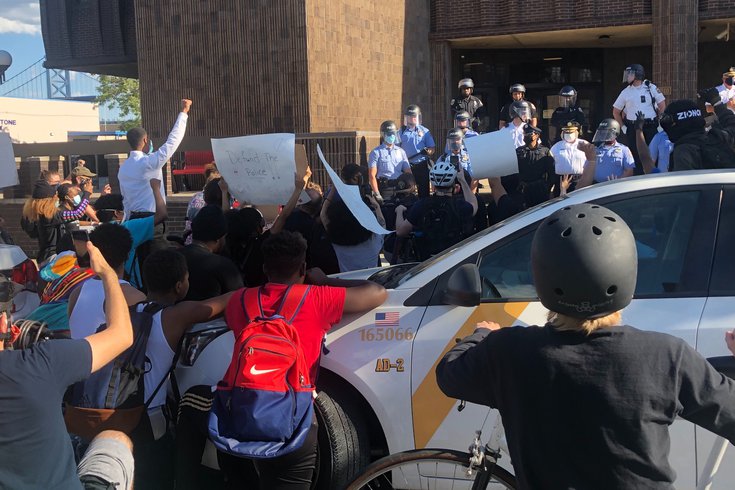 Demonstrators line up across from Philadelphia police positioned on the steps of the city's Fire Administration Building, 240 Spring Garden St., on Monday, June 1, 2020. It was the third day of protests stemming from the death of George Floyd, who died May 25 while in custody of the Minneapolis police.

Philadelphia police used tear gas to disperse protesters who marched along Interstate 676 on Monday afternoon as the civil unrest sparked by the death of George Floyd continued for a third straight day.

Several hundred demonstrators spilled onto the highway around 4:55 p.m., blocking traffic and prompting the closure of the Benjamin Franklin Bridge.

A crowd surrounded the vehicle of Pennsylvania State Trooper, rocking his vehicle and leaving him without the ability to safely leave, police said. Two SWAT teams arrived and initially fired spray pellets, pepper spray and bean bags at the crowd. They later turned to tear gas and non-chemical white smoke.

"Today's deployment of tear gas was a means to safely diffuse a volatile and dangerous situation, and restore order, when it became increasingly clear that other measures were ineffective in accomplishing that necessary objective," Police Commissioner Danielle Outlaw said. "We will continue to evaluate the propriety of all applications of force, and make determinations as the circumstances of each unique situation dictate."

The incident will be reviewed by the department's Internal Affairs division.

Mayor Jim Kenney also released a statement supporting the use of tear gas. But he stressed that he regretted the situation necessitated its use, saying he found footage from the scene disturbing.

"The use of tear gas during a demonstration is something that I never wanted to witness during my time as mayor," Kenney said. "I’m deeply saddened that peaceful protests for such an important cause are being diminished by actions that threaten public safety.

"I want to assure the public that this was not a decision that anyone took lightly. It was made because we simply cannot condone behaviors that endanger the lives of others, like traversing an open highway. The officers on site were concerned about the safety of protestors as well as those who may be driving on the highway."

Earlier in the day, Kenney announced a curfew would gain take effect at 6 p.m. and end at 6 a.m. Tuesday. Only those performing essential duties are permitted outside during those hours.

We march peacefully for justice. They still teargas us #phillyprotest pic.twitter.com/p2ojzBVoaU

Both sides of highway 676 are completely blocked as people flood onto the roads from all angles, chanting and holding signs. They’re continuing their march down the highway. pic.twitter.com/1Tuh8WyOpq

"We anticipate more protest activity in Center City," Outlaw said. "We will continue to restrict access to various areas of Center City in some fashion."

Scenes from protests across Philadelphia on Monday included both tense moments and strong signs of unity.

They are dropping tear gas from the helicopters! #Philly #phillyprotest #BlackLivesMatter pic.twitter.com/9azVjmWMGp 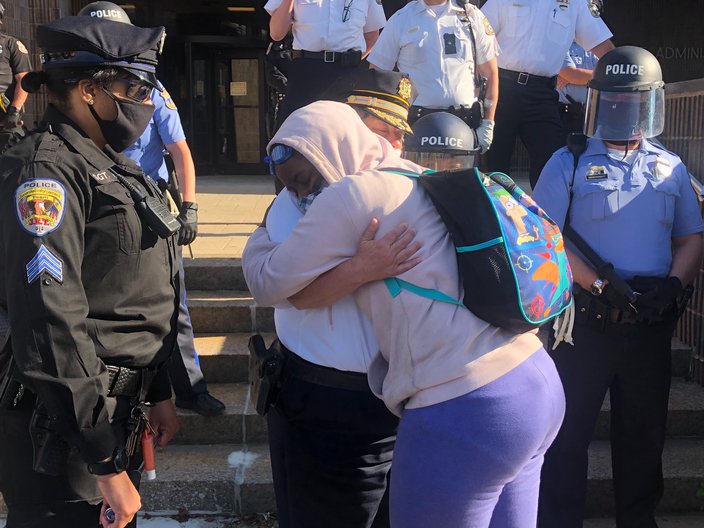 Kenney  met with Pennsylvania Gov. Tom Wolf in Philadelphia to discuss the additional assistance the city needs and to prepare for Tuesday's primary election. The city's request for a deadline extension for mail-in ballots was granted, covering several other counties also in the grips of protests.

Another curfew on Tuesday night will begin at 8:30 p.m, in order to ensure voters the opportunity to participate in the election.

The mayor expressed frustration with those who have failed to obey the curfew.

"I am, frankly, extremely disappointed by the number of people who ignored the curfew — especially minors," Kenney said. "This curfew is imposed not just to protect property owners and businesses. It's imposed to protect residents."

At least 429 people have been arrested since Saturday afternoon, when peaceful protests demanding justice for Floyd devolved into chaos. Floyd, a black man, died in police custody in Minneapolis on May 25. Four police officers were fired in the days after his death, including Derek Chauvin, who has been charged with third-degree murder and manslaughter.

Fires, looting and destruction of property spread from Center City to North Philadelphia, West Philadelphia and other parts of the city on Sunday as police were deployed en masse. The National Guard arrived Monday to provide additional support to local law enforcement.

"What you're seeing right now across the country is unlike any of us have seen," Outlaw said. "We have been sitting on a powder keg for quite some time — and it has burst. You layer that with the level of anger that's been pent up, and then you add technology."

Philadephia police received as many as 18,000 calls in a single day over the weekend, compared to an average of about 3,000. While the department has worked to respond to all calls, the growth of the protests and sudden demand for redeployment has made containing the destructive elements a major challenge.

"Anyone who says we have control of an unknown situation is just flat-out arrogant," Outlaw said. "We don't know what we're going to be dealing with and it continues to unfold each and every day. We don't know what we have until we get there. All we can do is be as prepared as we can."

A map presented during the press briefing showed the locations of 378 fires, including 14 that have been declared arson. 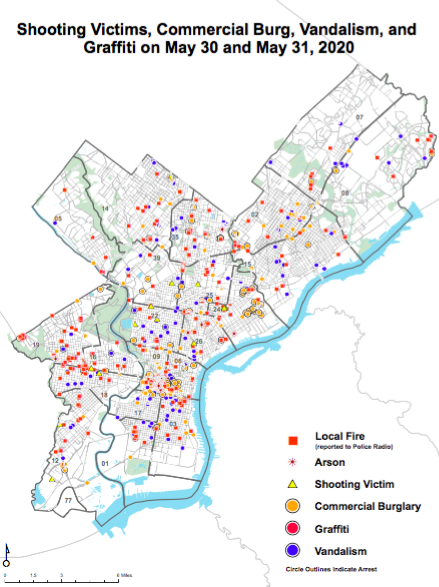 Police reported 246 commercial burglaries, four acts of graffiti, 154 acts of vandalism, and 21 shootings since the protests grew out of control on Saturday. At least 18 police officers have been injured and two remain hospitalized. Those injuries include chemical burns, head trauma and broken bones.

At Kensington and Indiana avenues, Outlaw said police encountered acts of vandalism and a three-alarm arson. At 52nd and Market streets, multiple police vehicles were set on fire and at least five officers were injured. And on the 3600 block of Germantown Avenue, numerous businesses were looted and vandalized.

"It's about resources and having the ability to get ahead of what's happening," Outlaw said.

Outlaw explained that police have been outnumbered in many locations. At times, police have had difficulty amassing an adequate response as protesters attempt to outwit them. Historically, police would have deployed most resources to a centralized location, she said, but the protests seen this weekend have splintered the law enforcement response.

"The way we've been doing crowd management for the last several years will now have to adapt, as those who come out and protest and demonstrate have adapted," Outlaw said. "They have counter-tactics. They have gone dark. And they're very smart in how they do this. This is very coordinated. So a lot of the strategies and practices of the past don't necessarily work anymore."

City officials repeatedly expressed support for peaceful protests in recent days, but strongly condemned those who have destroyed property and looted. Kenney and Outlaw initially suggested that outsiders have come to Philadelphia to create chaos during demonstrations.

Preliminary arrest data provided on Monday shows that the majority of those detained for summary offenses are from Philadelphia.

At a press conference earlier Wednesday, U.S. Attorney William M. McSwain said he suspects most of the looting is "local" and "opportunistic," but that the destruction may have been incited by individuals from outside the city or with gang ties.

Outlaw would not identify any groups suspected to be associated with the violent turn of protests in the city. She said police are turning their focus on individuals.

"We are attempting to work with our partners to identify specific individuals who might be known agitators to incite riots within these groups," Outlaw said. "There's a lot of work going on behind the scenes as well as investigations."

As the city prepares for Tuesday's primary election and a June 5 transition to the yellow phase of Pennsylvania's COVID-19 reopening, Kenney said he could not promise that the city will meet that benchmark.

"Things have happened in the meantime that have created some obstacles to doing that," Kenney said. "I can't announce right now that we're not, but if you look at what we're tied up with — pandemic, a depression, civil unrest and an election — there's only so much resources and energy that we have. I'm not saying no, but I'm not saying yes, either."