Mayor Kenney, Commissioner Outlaw say Saturday afternoon's violence was instigated by people who had nothing to do with the morning's demonstations 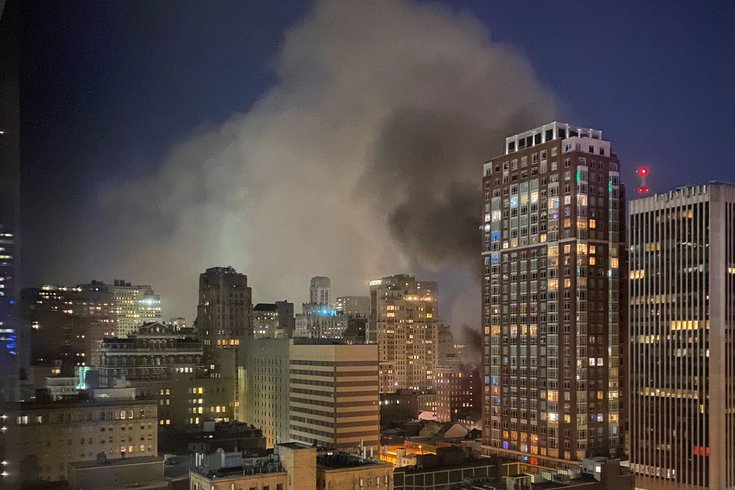 Smoke from fires set by rioters rises above the buildings in Center City, Philadelphia, on Saturday night. What began as peaceful protests among people seeking justice for George Floyd, a black man who died in the custody of Minneapolis police, devolved Saturday afternoon. Police cruisers were set on fire and stores along Walnut and Chestnut streets were looted.

Saturday began with peaceful protests in Philadelphia with 3,000 demonstrators gathered at the steps of the art museum, seeking justice for George Floyd. By mid-afternoon, the events took a violent turn resulting in clashes with cops, cars being burned and Center City stores being looted.

The city's leaders condemned Saturday afternoon's violence and riots, blaming those destructive events on outsiders who had nothing to do with those seeking justice for Floyd, a black man who died in the custody of Minneapolis police on Monday.

"What has taken place today in the city and across the nation is unacceptable." Philadelphia Mayor Jim Kenney said, referencing similar violence and riots that occurred in other major U.S. cities on Saturday.

The mayor was specific that the protesters who participated in the "kneel in" in the morning are justified in their outrage for what happened to Floyd, calling their demonstration a "touching showing of our collective grief."

Around 3 p.m. "elements started showing up that weren't part of the original march," the mayor said.

Philadelphia Police Commissioner Danielle Outlaw squarely blamed Saturday's destruction on people not affiliated with the peaceful demonstrations, but she declined to name who those individuals or groups were.

Kenney, Outlaw and other political and religious leaders spoke at a press conference just after 8 p.m. Saturday, not long after the citywide curfew took effect at 8 p.m.

Philadelphia's curfew remains in effect until 6 a.m. Sunday morning, and will resume again Sunday night from 8 p.m. to 6 a.m. Monday morning. Only people with essential duties are permitted to leave home during the curfew hours, Outlaw said.

As the commissioner spoke at the press conference, she received an alert on her phone. She would return to the podium later and explain that message was to inform her that officers had begun arresting people in violation of the curfew.

As of early Saturday night, 13 police officers had been injured in the riots, Outlaw said. Some were struck by solid or liquid projectiles, others were injured in confrontations while attempting to control crowds. Some of the police had suffered chemical burns, she said. One officer suffered a broken arm when he was run over by a fleeing vehicle.

9th Dist. Bike Officer was attempting to stop individuals in a vehicle who were involved in looting a business in the area of 7th and Chestnut. The individual ran over the officer while escaping. Officer currently stable at Jefferson Hospital with a broken arm and other injuries

Kenney described city police officers being spit on, hit with bottles and bags filled with urine and doused in other "caustic agents." The mayor praised the police for their work Sunday.

"I have never seen a group of people have more restraint, putting up with what they put up with," he said.

At least 4 police vehicles were set on fire. One belonged to the Pennsylvania State Police.

"There were numerous incidents of looting along the West Walnut and West Chestnut (street) business corridors," Outlaw said.

This declaration authorizes the commonwealth and its agencies to assist municipalities in their response to de-escalate violence and keep our communities safe: https://t.co/gkg0H6Aslv

Pennsylvania Sen. Sharif Street said he attended Saturday morning's demonstration in honor of George Floyd, at the steps of the Philadelphia Museum of Art, with his daughter. "People rightfully stood up and said that George Floyd was murdered," Street said.

The chaos in the afternoon was intended to "distract from that narrative," he said because now people will talk about the destruction instead of Floyd and the need for criminal justice reform.

Another rally for criminal justice in memory of Floyd is set to take place 1 p.m. Sunday at the Octavius V. Catto statue on the south side of City Hall.

Thousands assembled around City Hall and the surrounding blocks, where at least four police cars were set on fire, buildings were vandalized and store windows were smashed. Protesters  attempted to remove the controversial statue of former Philadelphia Mayor Frank Rizzo at the Municipal Services Building.

CARS ON FIRE: Multiple cars have been set on fire near Philadelphia City Hall as protests continue. #GeorgeFloyd

Protesters in Philly are breaking windows at City Hall pic.twitter.com/03lHGlNnNM


Police pepper sprayed a group of protesters around an armored truck a short time ago as protests continue around City Hall in Philadelphia. https://t.co/uLvirxUQqb pic.twitter.com/OI8FFAQsDe

STORES LOOTED: Storefronts on Chestnut Street have had their front windows smashed as looters make their way in and out of the buildings.

Earlier Saturday, separate protests were held outside of City Hall and the Philadelphia Museum of Art. They remained peaceful for much of the afternoon. Philadelphia police acknowledged the peaceful nature of the earlier protests, but denounced the vandalism that has followed.

The demonstrators exercising their first amendment rights at City Hall and the Art Museum did so peacefully. We appreciate their voice and their manner of expression. However, since that time, others have convened in Center City and are committing criminal acts, including..

The peaceful protests earlier were touching showings of our collective grief. But the anger being displayed now and this afternoon cannot and will not continue. As I said yesterday, we all have reasons to be deeply disturbed by systemic racism that has plagued our society for far too long. And we are justified in our anger when another unarmed black American's life is cut tragically short at the hands of the police. But what's taken place today in our city and across the nation is unacceptable.

None of today's acts of violence and destruction of property will do anything to restore faith and trust between police and communities of color. Although anger and distrust are justified, acts of violence and destruction are never justified. We will get through this. We will continue to hold bad cops accountable and we'll hold those who committed these acts today accountable also. We will continue to support the police officers who protect and serve our residents with dignity every single day, in the same way we support the members of the public who protest and express their opinions peacefully.

City managing director Brian Abernathy reminded residents that Philadelphia remains in the midst of pandemic and urged a peaceful end to Saturday's protests. He said the city may consider extending the curfew if the situation doesn't improve.

Protests erupted this week after a video surfaced showing the violent arrest of Floyd, a 46-year-old black man, by Minneapolis police. The video shows white officer Derek Chauvin kneeling on top of Floyd's neck for nearly nine minutes during the arrest, ignoring Floyd's desperate pleas to let him breathe. When paramedics arrived, Floyd was unresponsive and was later pronounced dead.

Chauvin, who was fired by the department, since has been charged with third degree murder and manslaughter.

Follow along below with the latest breaking news below on our live thread of the protest in Philadelphia.