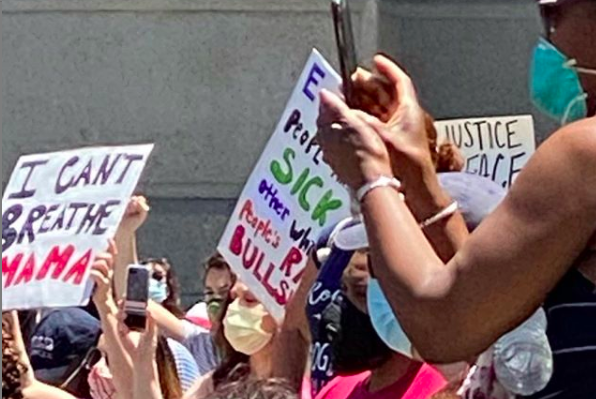 Protestors gathered at Philadelphia City Hall and the Art Museum Saturday afternoon in protest of the death of George Floyd. The event was one of many taking place across the nation following the release of video footage showing the violent arrest of Floyd by Minneapolis police officers which resulted in Floyd's death.

Protestors gathered Saturday at Philadelphia City Hall calling for justice for George Floyd, who died while being arrested by Minneapolis police officers on suspicion of forgery on Monday.

Philadelphia's event is one of a series of nationwide protests against racism and police brutality following Floyd's death. Events took in other major U.S. Cities including Minneapolis, New York City, Los Angeles, Atlanta, and Oakland.

Protests erupted after a video was released showing the violent arrest of Floyd, a black man, by Minnesota police officers. The video shows white officer Derek Chauvin kneeling on top of Floyd's neck for minutes during the arrest, eventually leading to his death.

The protest at City Hall began around 12 p.m. Saturday in front of Philadelphia's City Hall in Center City.

Organizers said it planned to incorporate social distancing measures suggested to reduce the potential spread of COVID-19, as the protest takes place mid-pandemic.

Protestors shared footage of the event on social media. Footage from early on in the event showed some participants wearing masks and kneeling, which they planned to do for nine minutes in memory of Floyd as that was the length of time Chauvin was on top of Floyd.

Other posts showed at least dozens of protestors chanting "For our kids," and "Black Lives Matter."

Signs were also seen with the message "We want all four," referring to the protestor's call for the arrest of all four police officers involved in Floyd's death. Chauvin alone was charged with third-degree murder and manslaughter Friday by Minnesota authorities and taken into custody.

Philadelphia 76ers' forward Tobias Harris was among those who took part in Saturday's protest too.

During the time of the Oakland protests for George Floyd Friday night, two security officers were shot and one was killed. Officers were standing guard outside of the Ronald D. Vellums federal building when a vehicle pulled up outside and opened fire. It was reported that suspects involved in the shooting were arrested but the police did not yet provide specifics.

There were nearly 500 people that said they would attend on the Facebook event page for the Philadelphia City Hall protest. Another protest, hosted by the Philadelphia Chapter of Black Lives Matter showed nearly 4,000 people were interested in attending.

The second protest hosted by BLM named, "Solidarity Against Police Terrorism," will take place on the Art Museum's Steps beginning at 2 p.m. A livestream showed participants already gathering there.

A description on the Facebook's event said it aimed to bring attention to the recent deaths of other Black people in addition to Floyd who all died during the global health crisis.

"The police killings of black people are continuing to occur despite a global pandemic. Recently, the cops have murdered Ahmaud Arbery in Georgia, Tony McDade in Tallahassee, Breonna Taylor in Louisville, Regis Korchinski-Paquet in Toronto, and George Floyd In Minneapolis," the event's description read. "Our comrades in Minneapolis are engaged in a righteous struggle against white supremacist state violence that serves as an example to us all."