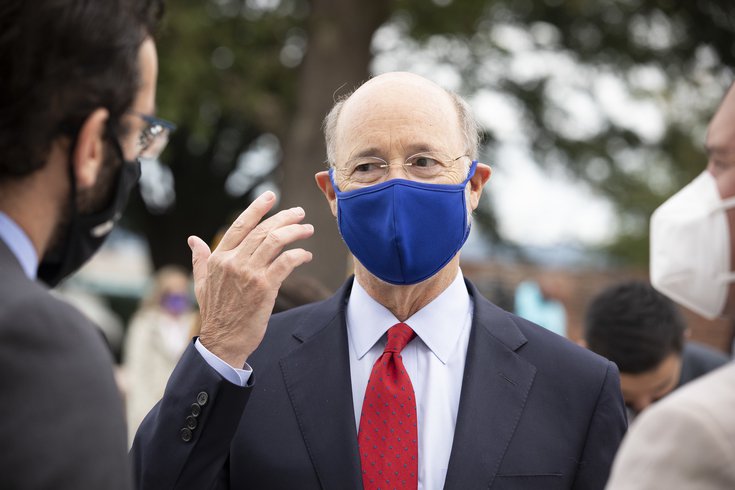 Pennsylvania Gov. Tom Wolf has been sued by a pair of couples who claim his emergency powers have run rampant during the coronavirus pandemic. The suit specifically objects to the state's mask mandate and contact tracing program.

Two Pennsylvania couples have filed a federal lawsuit against Gov. Tom Wolf and other top state officials, claiming the state's face mask mandate and contact tracing program are signs of "tyranny" that strip them of their Constitutional rights.

"For many individuals, including plaintiffs, a face mask is a symbol of oppression and an attempt by the government to control the citizenry," the suit claims.

The two couples, with legal support from the American Freedom Law Center, seek relief from the mask mandate on a variety of Constitutional arguments against the governor's use of "emergency powers" during the coronavirus pandemic. They contend the universal mask mandate, imposed in early July, and contact tracing program both violate "basic individual rights." (The entire court document filed Thursday can be read at the end of this article.)

Pennsylvania's mask mandate specifically requires people wear a face covering when outdoors and unable to consistently maintain a distance of six feet from people who are not members of the same household. It also applies to indoor locations where members of the public are generally permitted.

"However, the propaganda message from defendants Wolf and Levine is that masks are required anytime an individual leaves the home," the couples claim.

At one point, the lawsuit compares Wolf to a monarch.

"Defendant Wolf has assumed the power to lord over the lives of Pennsylvanians like a king, mandating restrictions that deprive citizens, including plaintiffs, of their fundamental liberties," the lawsuit states. "The Pennsylvania Supreme Court has ratified this 'monarchial innovation.' The citizens of Pennsylvania have no recourse but to seek relief from this tyranny through the United States Constitution and this court, the guardian of the freedoms guaranteed by that historically important document."

Medical research has widely validated the benefits of wearing face masks to prevent the spread of COVID-19, including recent research that confirmed cloth coverings protect those who wear them, not just others.

Despite the widespread evidence supporting masks as a preventive tool, the lawsuit insists that masks "can have negative consequences for the wearer," such as headaches and dermatological issues.

Most centrally, the lawsuit contends that masks are being wielded as a "political symbol" in an election year.

"During this current political climate, a mask has become a symbol of government oppression. Because a mask has become a political symbol during this current and highly politicized pandemic, the wearing of a mask is a form of symbolic speech," the lawsuit says. "Consequently, via the mask mandate, defendants are compelling plaintiffs to engage in a form of expression and to convey a message with which they disagree."

Elsewhere, the lawsuit bemoans the intrusive nature of the state's contact tracing program, which impacted the Parker family after they were exposed to COVID-19 and asked to quarantine.

Conflicts over masks have led to widely reported arguments and violent disagreements across the United States and the world, including conflicts between citizens and other incidents involving police efforts to enforce mask requirements.

In Philadelphia, the health department has been pleased by the overall compliance with the city's mask mandate. Inspectors recently found more than 90% of Philadelphia residents wore masks as they exited retail establishments and waited at SEPTA stations.

Earlier this week, Wolf renewed Pennsylvania's COVID-19 disaster emergency declaration, which has been in effect since March. The extension runs for another 90 days, asserting the pandemic remains of such a severe magnitude that emergency action continues to be necessary.

Since the start of the pandemic, Pennsylvania has reported 137,662 cases of COVID-19, including 7,742 deaths attributed to the virus.

Federal lawsuit against Gov... by PhillyVoice.com