Nate Herbig is now the Eagles' No. 1 OG, so let's get to know him, with gifs and stuff 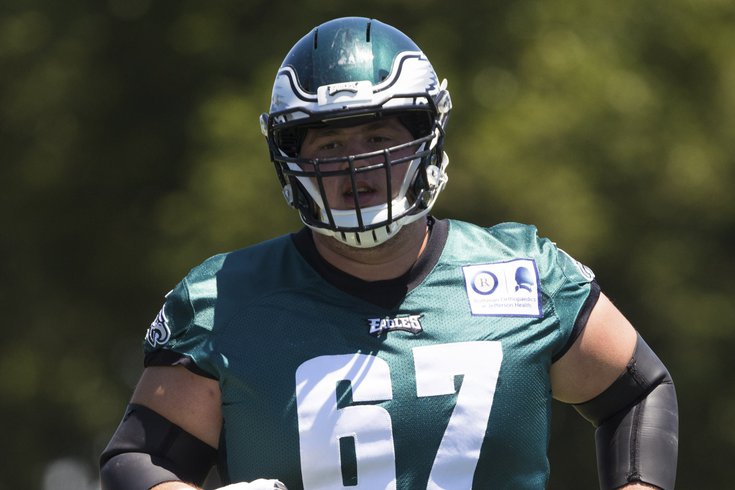 Nate Herbig's body was chiseled out of granite by the gods, and worshiped by the ancient Egyptians.

With Brandon Brooks almost certainly done for the season and Isaac Seumalo out "for the foreseeable future," the Philadelphia Eagles' new No. 1 offensive guard is Nate Herbig.

The Eagles had a few different options at RG heading into Week 2 against the Los Angeles Rams. They could have gone with Matt Pryor, who started a couple of games at RG last year, or fourth-round rookie Jack Driscoll, who started at RT Week 1 against the Washington Football Team. Or maybe even Jamon Brown, a player with 47 career starts that the team signed last week. Instead, they went with Herbig, who they clearly favor over those other options.

Since it looks like Herbig is going to be a starter for this team for a while, I though it might be useful to take a look at what he's all about as a player. Herbig is a big-bodied guard at 6'4, 334, but less like Brandon Brooks, and more like Billy Bob from "Varsity Blues."

In college, Herbig dealt with injuries in his final season in 2018 (his junior year), and then he curiously skipped his team's bowl game to enter the draft early. He was a good player in 2017 at Stanford, when he played a full season. That's the player the Eagles hoped they were getting when they signed him as an undrafted free agent.

Here's a highlight reel from that season. Trust me, this is fun to watch:

Of course, if he did that consistently, he'd be a first-rounder, like Quenton Nelson was. Unfortunately, he was a little like an offensive guard version of Adam Dunn, in that he was either going to hit a home run, or whiff.

Herbig's game against the Rams showed some nice promise, especially in the run game, but it also provided a little bit of a peek at his deficient areas. We put together a mix of both from his performance against the Rams, in the following Twitter thread:

Nate Herbig is now the Eagles' No. 1 OG, so let's get to know him, with gifs and stuff. (Article and thread) 🔥🔥🔥https://t.co/xNfRWOctSr

This Sunday against the Bengals, Herbig will move to left guard to replace Seumalo, and Pryor will fill in at RG, mainly because Pryor doesn't feel comfortable on the left side.

"The No. 1 thing is Matt Pryor for us has played right guard specifically," Doug Pederson said on Friday. "He played there last year. He played next to Lane last year, and he feels comfortable. Nate's been the guy that we have been able to use in a couple of spots, right. He can also play center if need be and so he's the one that we feel more comfortable in right now being able to move him to the left side. So both the guys have handled it extremely well, but really the main reason is that Matt Pryor is more comfortable and has played the right guard position more."

When you have seasons like the Eagles are having, where a lot of guys get hurt and things start to go sideways, it is at least good to get a look at some of the younger guys on the roster, and Herbig can perhaps grow into a long-term role as a trustworthy, versatile backup interior offensive lineman.