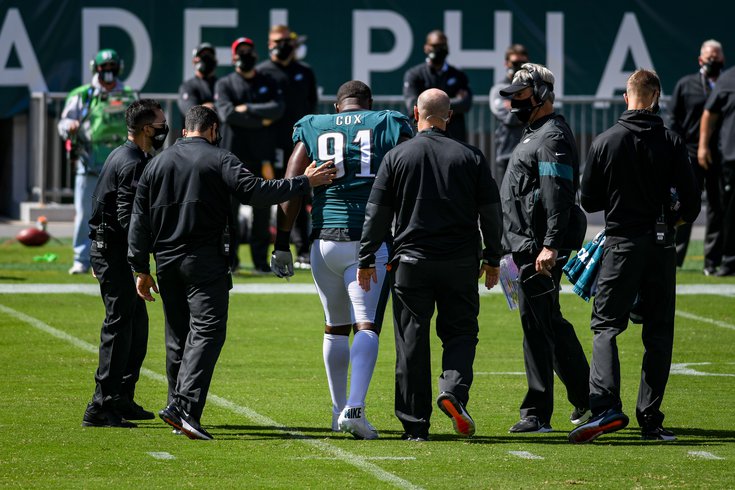 Trainers and coaches tend to an injured Fletcher Cox (91) during the Philadelphia Eagles game against the LA Rams at Lincoln Financial Field in Philadelphia on September 20, 2020.

As always, the Philadelphia Eagles are far more banged-up than their opponent, the Cincinnati Bengals, who won't come into Philly completely injury-free, but are relatively healthy. The Eagles, who are currently 4.5-point favorites according to TheLines.com's consensus odds, lost Isaac Seumalo, Jalen Reagor, and possibly Fletcher Cox since last week.

Here is the Eagles-Bengals injury report, with analysis.

• WR Alshon Jeffery (foot): Jeffery practiced for the first time this year on Thursday, in a limited capacity.

• WR Jalen Reagor (thumb): Reagor tore the UCL (ulnar collateral ligament) in his thumb. We covered his potential timeline for return in greater detail here. Doug Pederson said that the offense will have to rely more on J.J. Arcega-Whiteside in Reagor's absence. 🎉

• DT Fletcher Cox (oblique): Cox got injured during the Rams game, but continued to play. Cox has yet to make a big impact so far this season. He has 6 tackles, one for loss.

• LG Isaac Seumalo (short-term IR): With Seumalo now out "for the foreseeable future," per Doug Pederson, the Eagles are without three starting offensive linemen.

• S Will Parks (short-term IR): Parks' injury is a significant one, in terms of how it will affect the defense. He is the Eagles' third safety, but he was poised to play a much bigger role than that in 2020. Throughout training camp, Parks was sharing time with Nickell Robey-Coleman in a nickel role. Robey-Coleman was the regular nickel, with Parks serving as the "big nickel." Parks was also getting looks as a dime linebacker. The bet here is that whenever he returns to the lineup, he will take substantial snaps away from the struggling Robey-Coleman.

• DE Vinny Curry (short-term IR): In Week 1, Curry started, and had 3 tackles and a half sack on 22 snaps. He had to be helped to the locker room after reportedly injuring his hamstring. He should be out a while.

• DT Mike Daniels (groin): Daniels didn't practice at all this week, so he's probably closer to the doubtful side of this "questionable" designation. If he can't go, the Bengals will be without both of their starting DTs, which would be a welcomed sight for an Eagles team missing both of their starting guards.

• S Shawn Williams (calf): Williams was carted off with a calf injury during a practice in training camp, and has missed the first two games of the 2020 season. He has been a regular starter for the Bengals over the last four years, racking up 354 tackles and 10 INTs during that span. He's now probably their third safety, behind Jessie Bates and Vonn Bell.

• CB Trae Waynes (IR): During the offseason, the Bengals signed Waynes to a three-year deal worth $42 million. Third-year CB Darius Phillips has filled in for Waynes the first two weeks. We covered Phillips in our five matchups to watch.

• TE C.J. Uzomah (IR): Uzomah was productive the first two weeks of the season, catching 8 passes for 87 yards and a TD before he tore an ACL against the Browns.

• OL Xavier Su'a-Filo (IR): You may remember Su'a-Filo from his days in Dallas. JAG offensive lineman.