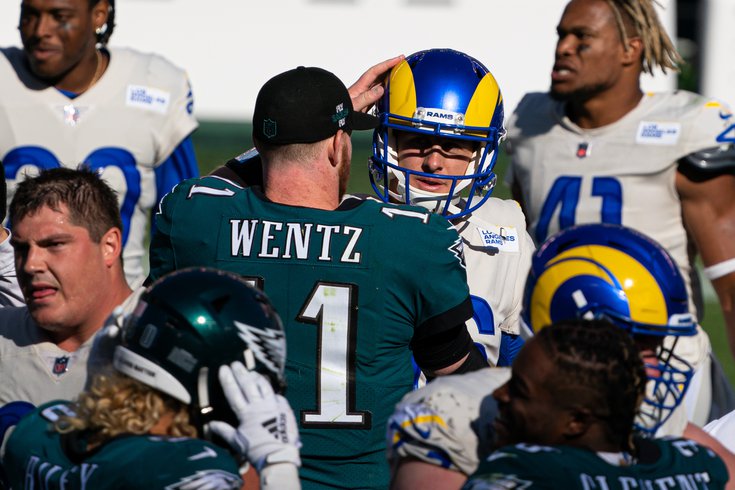 Question from Steve: Who do you think is more responsible for our 0-2 start? Howie Roseman or Doug Pederson? And how bad does it have to get for Jeffrey Lurie to make a change before next year?

Roseman, clearly. The 2017, 2018, and 2019 drafts have collectively not produced enough positively contributing players, his free agent acquisitions in 2018 and 2019 were bad (2020 not looking great either, by the way), he has made bad deals at each of the last two trade deadlines, and contract extensions for Alshon Jeffery and Brandon Brooks (more notably Alshon) have really damaged their cap situation.

Question from VT Eagles: How long do you think we are in purgatory for with this team. Is it just this year? Or should I buckle up for a long period of mediocrity?

I think that one argument for a rebuild is that rebuilds can happen quickly in the NFL. The team looked like it might be bad for a while after their disastrous 2015 season. Two years later they had their first Super Bowl.

Question from 'It’s me': I thought Van Jefferson would’ve been a better pick than Hurts there. Did this past game prove that?

Nothing against Hurts as a player, because he got drafted right around where he should have been drafted, but for this Eagles team, a lot of players would have made more sense. My understanding is that if Hurts had gotten taken before the Eagles picked, they would have either selected S Jeremy Chinn or RB J.K. Dobbins. Chinn is a starter, and has 15 tackles already, while Dobbins is averaging 7.8 yards per carry, and has two touchdowns. There were a lot of good players available at pick 53 who could be contributing on this team, right now.

Question from Ken: Who will win the NFC East going off of the first two weeks?

I think the Cowboys clinch by Week 16, without even having an impressive record themselves.

Question from Brian: Is the season over if they lose to the Bengals?

The three games after the Bengals are the 49ers, Steelers, and Ravens, which is obviously a tough stretch.

Looking back at last year, the team was 1-2 after a bad home loss to the Lions, and some were beginning to write them off. Then they went into Green Bay and had an impressive road win, on a short week, no less. So they've beaten good teams after losing to bad ones, and have shown resiliency on several occasions during the Pederson era.

So would I kill them off in my hierarchy series, for example, if they lost to Cincy? No, it's too early for that, especially if, say, Dallas still only has a one-game lead on them.

But this year just really feels so much different. As we've mentioned previously, while they have stunk on the field at times in previous years, they seemed like a solid group in the locker room. I'm not so sure that's the case anymore.

Question from teddy: If the season is toast around trade deadline, do they trade Ertz?

If there’s a solid enough offer (the equivalent of a high 2 or better), they absolutely should. A few outliers aside, tight ends don’t age well, and if the Eagles’ season is in the toilet, he’s likely never going to have more value going forward than he will at the 2020 trade deadline.

Comment from Standard Fan: I love turning on this team after 2 losses.

Yeah, so I see where you’re going there, but those weren’t just two garden variety losses. They got smoked in both games, once by the worst franchise in sports, the other by a team with a flawed quarterback that didn't make the playoffs last year. They're dead last in the NFL in DVOA. Their quarterback is playing very badly. The offensive line is missing three starters. The defense got wrecked last Sunday.

If this were baseball, or basketball, or hockey, meh, no big deal, there's another game coming right up. That's not the case in the NFL. Fans are rightfully worried that this season is going sideways, and quickly, and from a bigger picture standpoint, that a rebuild is on the way as a result.

Question from Chris K: Why is the team so cloak and dagger about injuries now? I feel like in the Andy days he was always very forthcoming. What are they hoping to gain? It's not like this is hockey in the 70's when if the other team knew you had an injury they'd spend the next period hacking at it.

I agree that Andy was far more forthcoming about injuries. Hell, they used to make the head trainer available to explain injuries. I remember he once came walking out with a model of a foot, and he showed us the "cuboid bone" that Todd Herremans had broken, how it would heal, and comps of other players who had the same injury. Personally, my sense is that Doug would be happier just being honest about them and moving on, but it feels like the directive to hide them is coming from elsewhere.

I imagine a lot of energy goes into hiding injuries from a competitive media contingent that goes like 40 deep. In a normal offseason with locker room access, someone would have flushed out that Miles Sanders and Lane Johnson were more questionable to play Week 1 than the team led the fans to believe. There was definitely a little word of mouth going around among us that Johnson was more hurt than his "day-to-day" status would indicate.

Question from offensive offense: If the Eagles go 0-6, will Carson get some mysterious injury to allow Hurts to play and Carson to "save face"?

We're going deep into the "what if" machine here, but if they're 0-6 and Wentz is still playing the way he's playing, I would think they have to at least get a look at Hurts at that point. And the way they'd spin it from a PR perspective would be interesting. They almost can't go the injury route, because that's already the theme of his career. It would almost be worse than benching him on pure merit.

Question from SPQR13: Do you think the reason that John DeFilippo was never rehired is because the organization is purposely trying to coddle Carson and not have any coaches around him that would challenge him and call him out for his mistakes, even though Carson clearly had his best season in 2017 with DeFilippo?

The Eagles blocked DeFilippo from interviewing with the Jets for an open offensive coordinator position after the 2016 season. They couldn't block him again after the 2017 season, because his contract was up, and he got a good opportunity running the Vikings' offense.

Question from BOE: Can you comment on Jared Goff’s jersey sleeves? They are short, not like Sammy’s, but also look like they are cut up the armpit making them very open/wide. I don’t know how to explain it or what to call it, but am confident that you will figure it out. Thanks!

So here's a look:

Goff's sleeve game makes sense for him. In 2015, I started taking a look at all the quarterbacks poised to enter the 2016 NFL Draft, knowing that the Eagles were likely to take one. One of the first things that jumped out to me then was how skinny Goff's arms were.

He can't really pull off the muscle jersey look, that just barely covers his shoulders. So in addition to having some sleeve coverage, he goes with the tight three-quarter sleeved shirt underneath. It was gorgeous weather in Philly on Sunday. He didn't need those sleeves, and he even wore them Week 1 at home in the Rams' indoor stadium.

I think his sleeve choice shows good self-awareness of his skinny arms, and I give it a thumbs up.

Question from Fighter: You have to challenge one Eagles player to a fight (no kickers/punters/long snappers allowed). Your goal is to last in the fight as long as possible since we know you aren't winning. Who would you challenge to a fight?

Disclaimer: To be crystal clear, I am in no way challenging any professional football players to a fight.