A look ahead to the 2016 quarterback class: Jared Goff edition 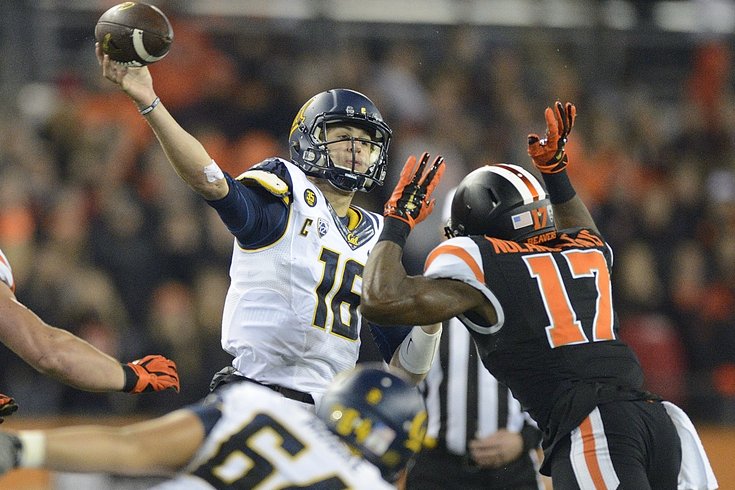 Jared Goff is skinny, but he can sling it.

The Eagles will more than likely head into the season with Sam Bradford as their starting quarterback. Bradford, as we all know, is coming off two consecutive ACL tears, which makes him nearly impossible to project going forward. He is also in the final year of his contract, so this is very much a "Let's see what you got" year for Bradford with the Eagles.

If Bradford proves to be anything close to the player many thought he would be when he was the No. 1 overall pick in 2010, the Eagles will more than likely try to sign him to a long-term contract extension. If his career continues to follow the path it has followed over his first five years in the NFL, the Eagles will be shopping for a new QB in 2016.

And so, we've already begun to take a very early look at the quarterbacks who may be available in the 2016 draft. In case you missed the first two entries of this series, you can see them here:

Goff's completion percentage isn't great, but if all of his games were like the two that I watched (vs. Oregon and Northwestern), he isn't helped out much by his receivers, who drop a boatload of passes.

Physically, the first thing that stands out about Goff is how skinny he is. Look at these arms. 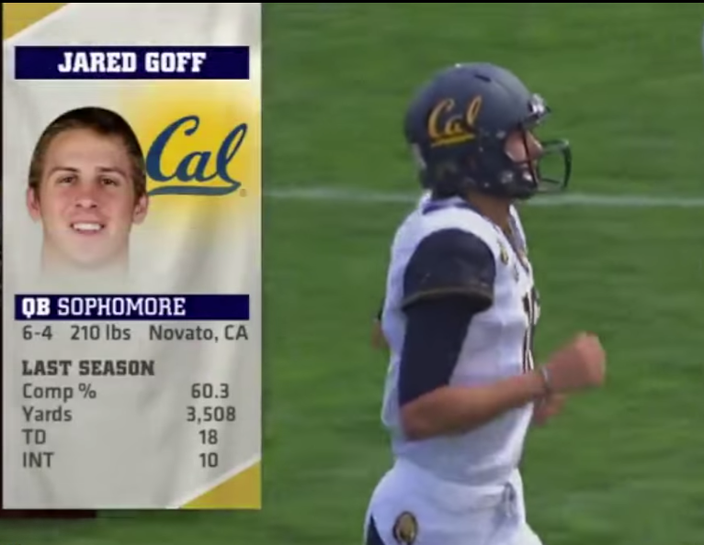 My girlfriend tells me my arms are manly, and I know she's lying, although I appreciate her effort. I'm sure Goff's girlfriend is telling him the same thing. To look at him, if you're an opposing defense, it looks like you can knock him out with one good shot. And yet, in two seasons as a freshman and sophomore, he's attempted 1040 passes.

He also stands in face of pressure and makes throws under heavy duress. Watch the ball placement on this throw as he's taking a big shot from an Oregon defender. You'd prefer it get there more quickly, but this is impressive accuracy.

Tough throw as he takes a shot from behind:

Great NFL-style back shoulder throw as he's taking a big hit, but the receiver drops the TD:

Watch him draw the safety up just enough with a pump, then deliver a perfect deep ball with a defender coming at him. Really well done.

Accuracy, both on traditional throws and affected throws

Here's an awkward looking throw that I loved as he avoids a defender while throwing a strike.

More excellent ball placement, although the receiver blows the catch.

Window throw, with quick release, but again, another drop:

• Holds onto it a little long on occasion. Sometimes his improvisations will lead to positive plays, sometimes they turn out badly. That's going to drive some coaches nuts.

• He is thought to see the field very well and go through his progressions. While I agree you see that at times, he will occasionally stare down receivers.

• He's not a statue, but he's not going to make many plays with his legs.

• "Air Raid" offense will bother some teams in that it's not a traditional drop back scheme (and thus more difficult to project to the pro level), but that's something the Eagles will care less about than other teams.

Overall, I like Goff quite a bit, and I think the Eagles will too. This could be a first round guy if he continues to progress. Goff is definitely a player to keep a close eye on this season.

(Note: The videos above cropped together by draftbreakdown.com. You can watch Jared Goff's games on their site here).