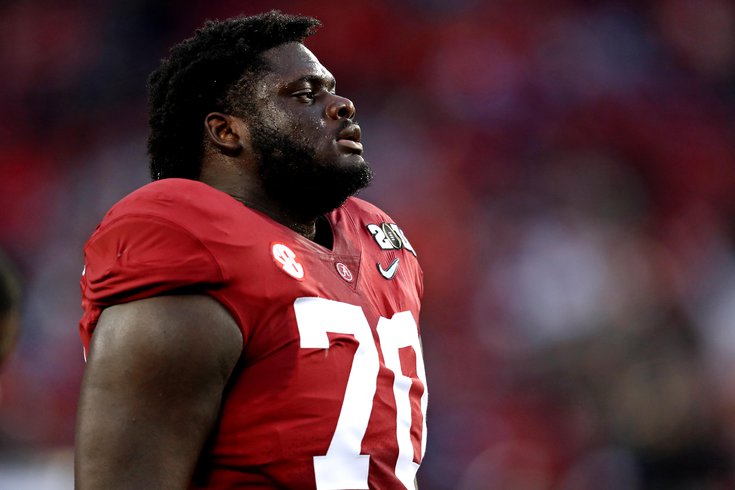 Alabama's Alex Leatherwood would give the Eagles options along their offensive line.

Weaver was thought of as a potential breakout player in 2019, but he tore an ACL, and he missed the entire season. In his debut in 2020, Weaver was impressive, racking up 7 tackles, 3 TFLs, and 2 sacks.

Just Incase you forgot, here’s a little reminder of how effective Rashad Weaver is. The man is a road block @R_Weaver17 pic.twitter.com/NFjM2TspS9

Weaver has good size at 6'5, 270, and the Eagles have an obvious need at DE, with Brandon Graham and Vinny Curry aging, and Derek Barnett unable to stay healthy.

Humphrey is a redshirt junior who served as Jalen Hurts' center, and might have been a first-round pick if he had entered the 2020 NFL Draft. He doesn't possess Jason Kelce's athleticism (nobody does), but he excels where Kelce struggled earlier in his career -- anchoring in pass protection, and getting movement in the run game with power and leverage.

A closer look at Humphrey:

If Kelce retires next offseason, one option would be for Isaac Seumalo to take his place at center. The Eagles could also just draft a center and have him fill in. A first-round center wouldn't exactly be an exciting pick, but Humphrey would an out-of-the-box solidifier of the Eagles' interior.

Williams is a bigger receiver who wins in contested catch situations. He's good around the goal line on slants, fades, and back shoulder throws, and he'll go up and out-muscle defenders for passes deep down the field, as you can see here.

This type of player will turn off some Eagles fans, given the disappointment that J.J. Arcega-Whiteside has been through the first 18 games of his NFL career.

However, Alshon Jeffery very likely won't be back in 2021, and if Arcega-Whiteside is a bust, Williams would be a classic "X" receiver in an Eagles offense that loaded up on speed at WR in the 2020 NFL Draft. Williams could be a Day 2 guy with a strong 2020 season.

Leatherwood's athleticism is rather obvious, and he's a potential first-round pick at LT. However, he could have particular appeal to the Eagles because of his versatility, as Leatherwood also has experience at guard. First, a look:

The Eagles aren't going to give up on Andre Dillard next year. He's going to be given every opportunity to start at LT in 2021. However, Leatherwood makes sense as a player who could compete with Dillard at LT, but who also has experience at guard, and would give the Eagles options along their line. I think he's a first round pick.

Big Marv is listed at 311 pounds, but he looks bigger than that to me, and in some ways reminds me of Dexter Lawrence, a player commonly mocked to the Eagles during the pre-draft process in 2019. Both Lawrence and Wilson were the No. 2 overall Rivals.com high school recruits in the country, a year apart.

Wilson is a huge run-stuffer who would immediately help the Eagles in that regard, which remains important in a division with Ezekiel Elliott and Saquon Barkley. In my view, that is his base expectation. However, like Lawrence, Wilson isn't just a run stuffer. He had 5 sacks in 2019, winning with his sheer power. Even if he doesn't rack up a lot of sacks at the next level, he is a player who can push the pocket, allowing for more opportunities for his defensive line teammates. A look:

Is Fletcher Cox still among the best DTs in the NFL? Will Malik Jackson still be around in 2021? I believe that there are legitimate questions on the interior of the Eagles' defensive line, and we know that the defensive tackle spot is a priority for them.

MORE: Mailbag: Is the season over if Eagles lose to Bengals?