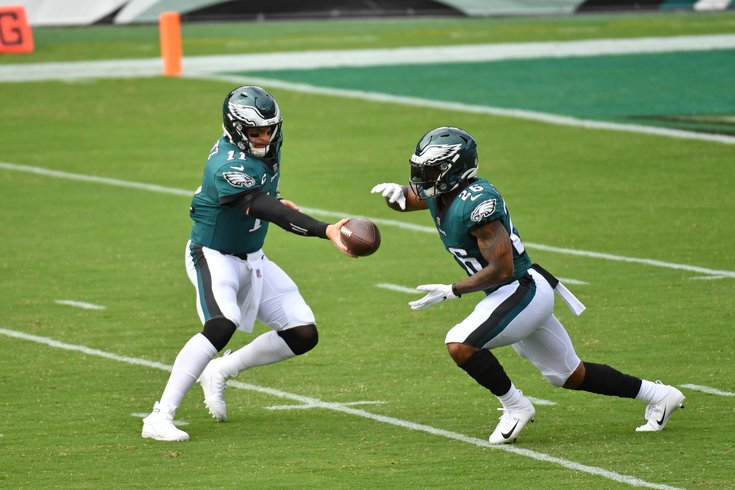 A battle of 0-2 teams lived up to the billing in the first half, with the Eagles sputtering to a 13-10 lead over a Bengals team that couldn't move the ball for 90 percent of the first half.

• Josh Sweat has been just about the only good week-to-week story so far this year, and he earned a start over Derek Barnett at right defensive end on Sunday. It didn't take long for Sweat to take advantage of the opportunity.

On Cincinnati's first third-down attempt of the game, the Bengals decided to send a double-team at Malik Jackson up the middle, leaving Sweat in a one-on-one battle on the outside. Sweat used his hands to turn the corner and Joe Burrow simply never had a chance from there.

Sweat's big play kicked off a strong half for the defensive front against a Bengals team that might have their franchise QB but isn't doing much to help him out so far. The Bengals wide receivers struggled to get separation against an Eagles secondary that got carved up by the Rams last week, and with Philadelphia not fearing anyone on the back end, Jim Schwartz dialed up a bit more pressure to bother the rookie QB.

If the offense had held up their end of the bargain, the Eagles would be sitting pretty at halftime. Unfortunately, well, you saw how it all unfolded.

• The second half should be the Miles Sanders show on offense because the Bengals' run defense is terrible and Sanders was pretty comfortably the most dangerous player they had in the first half. No need to overcomplicate things. It's a relatively tight game so the Eagles can't afford to be overly conservative, but it's not conservative if the other team can't stop it.

Outside of Sanders, there were two big positives for the Eagles in the first half: Carson Wentz's use of his legs and Greg Ward's reliability on third-down plays. We have not seen Wentz unleashed as a runner for a long, long time, and while we'll talk about the negative reasons we saw it below, the Eagles really need to feature his legs in the gameplan if they're going to have a chance with this group. Not like they have many big-play threats elsewhere.

As for Ward, it's business as usual for him after a strong second half to the season last year. He's not going to take the top off of the defense, but he wins the battles that really matter and has earned the trust of Wentz many times over. With the clock running down late in the first half, it was Ward who found an opening down the sideline, and Wentz delivered his best ball of the half to hit him in stride for a touchdown.

More of that in the second half, por favor.

• A more lenient critic would point out that Wentz's opening-drive interception was tipped at the line of scrimmage, giving him a pass for the mistake. You're going to have to look elsewhere to find that sort of critic. Wentz's throw probably would have been intercepted regardless of whether it was tipped or not.

If you look at where Wentz is trying to throw the ball here, three defenders are in the area around Jackson, and one of them is just sitting and waiting for Wentz to deliver the throw over the middle.

No idea what he thought he saw here.

To make matters worse, Wentz spent the rest of the first half gun-shy as a result of the interception. DeSean Jackson broke free near the goalline on first-and-goal late in the first quarter, but Wentz either didn't see or didn't feel comfortable firing into that window, and the Eagles would eventually have to settle for a field goal on the drive.

• Is there still time for Jason Peters to return the raise he was given? No? He was the single worst member of the offensive line in the first half, forcing Wentz into, funny enough, some of his best plays of the half. Flashes of the old Wentz came through, with the QB escaping from would-be sacks and picking up yards on the ground with his legs.

While that part was great to see — though I'd say he still doesn't look like he has the same burst as he used to — you're not going to have much success in the passing game if the play of your left tackle is consistently this bad. If there was pressure on Wentz, you could almost guarantee it was coming from Peters' side. Remember when he was enough to lock down that side of the line almost by himself?

They don't have a better option, and there's not a lot of reason to hope Peters will suddenly spring back to life. He's old and declining, it's how the game goes. Perhaps that's something management should think about the next time they rely on an old and declining player at a key position, which seems to happen far too often under Howie Roseman.

• I can't understand what Doug Pederson's gameplan was in the first half. Sanders came out and ran strong to begin the game, and while I know he wants to air it out more often than not, this is an opponent tailormade to gash on the ground. Philadelphia was averaging over 5.6 yards per carry in the first quarter, and it took until almost halfway through the second quarter for the Eagles to get their next rushing attempt.

When you succeed running the ball immediately and then go away from it for absolutely no reason, it's hard to make up an excuse for it. This is the worst rushing defense in the league, you don't need to overcomplicate things.

There were lots of strange little decisions within that bigger problem, too. For example, with the Eagles deep in Cincinnati territory and faced with a third-and-goal near the goalline, Sanders was sent to the bench for Corey Clement. It'd be one thing if Sanders was some big bruiser with no hands or versatility, but he has proven dynamic as a runner and a pass-catcher out of the backfield. Why take arguably your most dangerous player off of the field on a critical third down? On a later third-and-nine in the second quarter, the Eagles threw a comebacker to Zach Ertz where he got the ball near the line of scrimmage with his back turned to the marker. On what planet is that the start of a successful play?

The offense simply could not afford to be this sloppy in a game this team absolutely must-have. Systemic failure falls on the coaching staff.

• I get that their first-round pick receiver is out and not playing, which changes the complexion of the group a bit, but man is this a sorry group of receivers. All due respect to Greg Ward, it's sad that he's one of the only guys who can consistently create separation on third-down plays. When the tight ends aren't eating over the middle, the Eagles don't have much of a prayer to move the ball.

I'll say this — Wentz isn't helping these guys out much. On the rare intermediate-to-deep throws Wentz made in the first half, he overthrew his guys by a lot. Separation doesn't matter much if the QB can't get the ball there.

Wentz isn't the only primary figure in Philadelphia who needs to get his act together. Nothing is coming easy for this group right now, and 0-2 teams are definitely the sort of teams that nearly pick up too many men on the field penalties on special teams.

• Jalen Mills having a chance to make a play on the ball in the endzone and committing an egregious pass interference penalty instead is a good summation of his career.

• Ertz and Richard Rodgers is not quite the dynamic duo that Ertz and Dallas Goedert are. Goedert left the game with an ankle issue early in the first half, and we'll have to wait and see whether he's able to return on Sunday. They do not have enough talent to survive one of their best players going down.

• I'm still not quite sure this is an illegal hit, but man, did Malik Jackson blow up Joe Burrow on this play:

You hit me standing in the pocket like that and I'm retiring on the spot. I guess that's why I'm not an NFL quarterback (among many other reasons).