Eytan Shander: Are the Eagles bad, or just injured?

Also, did the Sixers' front office upstage the Phillies? 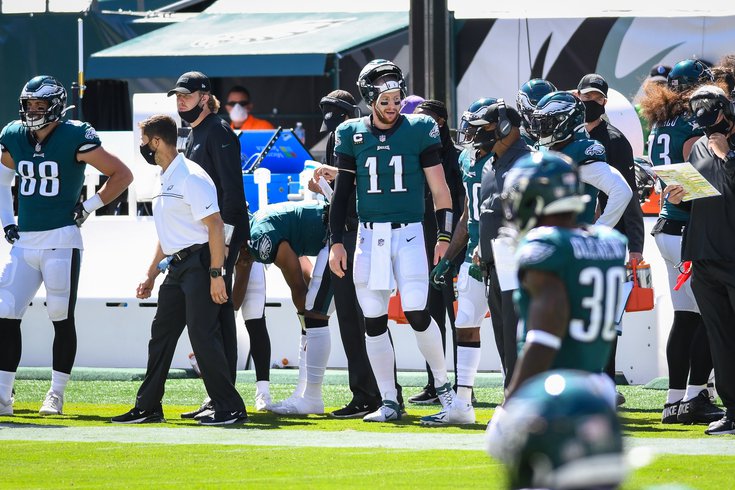 Nobody has any idea what identity the Eagles have, nor what the future holds for this season. Not a single person, including the people responsible for making this machine work.

How could they? The team is a walking and breathing injury waiting to happen. Every single week there’s a new face catching a pass from Carson Wentz and it’s growing tiresome. No can team expect to win – or even have an identity – without consistency between the quarterback and a wide receiver.

Having a top tandem in the NFL at the tight end position doesn’t excuse away how the other prime pass-catching position became so poorly stocked. Even when guys come back healthy, we just hold our collective breath they don’t go down… again.

It’s a shame this season is off to such a terrible start. Losing to Washington, tying the Bengals, then getting their first win over the (even more?) banged up Niners. When you factor in the injuries, there’s nobody who has any idea how good – or bad – this team really is.

This is not a good thing, probably more a bad thing. The best-case scenario for the Eagles is they win this division, bumbling and stumbling their way atop the NFC East. If Dallas wins it, there will be no playoffs in Mudville. That’s why the “I know” crowd doesn’t really have any grasp on what will happen. They are watching a team that is forced to change its identity by the week – in some cases by the half.

Wentz played better, and the defense stepped up. That’s the story from Sunday night. There are still painfully obvious signs of regression and missed opportunities, especially for an offense that really only scored 18 points.

Herein lies the biggest problem through the first four weeks. This team is still struggling. However, due to injuries we don’t know how much of that struggle is surface (injury) or deeply rooted — like concerns a player isn’t getting better. Before you move on to Doc Rivers and the Phillies, do not forget there is hope for Wentz.

Hope you say? Yes. The source of inspiration comes from the most unlikely source, Josh Allen. This kid went from being physically incapable of making throws ten yards down the field to being in the early MVP discussion. The Bills are winning games because of ALL of his abilities, including (now) making deep throws. One thing to add Stephon Diggs, another to be able to hit him routinely down the field. Allen developed this overnight, in a COVID-stricken offseason.

If Allen can turn things around with proper coaching and his own developments, especially after looking like he would never be able to throw the ball well, then Wentz has some hope still, at least from me.

You might not have noticed how well versus how poorly two teams handled movement in the front office. We already know the Sixers had a major opening at head coach, then successfully delivered us Doc Rivers. I am super excited to watch him coach here, knowing there are ridiculous and unfair expectations already placed upon his shoulders. I also am blown away – and kind of suspicious – as to how the team was able to land him. Assuming the entire time the new coach would want power in trades/FA, and assuming the new coach wouldn’t get it, led me to believe a guy in Doc’s shoes wouldn’t walk here. I was wrong on that and will give him some time to see how it plays out.

I still fear the big conversation to be had between Doc, Elton, and ownership about which of the two big pieces need to be moved. A fresh pair of eyes helps shine new light on a problem most people refused to acknowledge. But the Sixers get props for doing that and successfully getting away with something else, something the that the Phillies miserably failed.

One move, that’s it, just one move made for both teams. The Sixers effectively told us Brett Brown was the problem and he was replaced – upgraded if you will. Nobody else was fired, nothing else was done. We didn’t care once they brought in Doc, because they… brought in Doc! It was pretty impressive they were able to keep business as usual despite the coaching change.

Now, the Phillies. They didn’t even technically fire Matt Klentak, they kind of demoted him. Then upgraded a guy sitting next to him to the interim GM spot, with some belief he could keep the title. What? How many more videos do we need to watch of Bryce Harper wearing a JT jersey before we start to really focus on how awful the decisions were above Klentak.

Was this really the strategy? They could have brought back Charlie as the new GM and maybe that would have lessened the blow, but this was insulting.

I think we have to take the Eagles, right? You can get them at +7.5 at TheLines.com and I think it’s the right play, despite laying 120 points of juice. I can see a close loss, even taking the Steelers down to the wire. The problem is we simply don’t know who this Eagles team is, in some cases literally. It’s tough to bet a team that is always shifting around their personnel. I don’t think the Steelers are as good as advertised but good enough to win a close game.

Catch FOX 29’s “Props & Locks” with myself, Scott Grayson, and the always entertaining Sean Bell! We will be loaded with props for the Eagles game and break down two other big value matchups this week.

Every Thursday night at 7p we will get you ready for the TNF game and the rest of the weekend in the NFL.