The Eagles are in first place in the NFC East 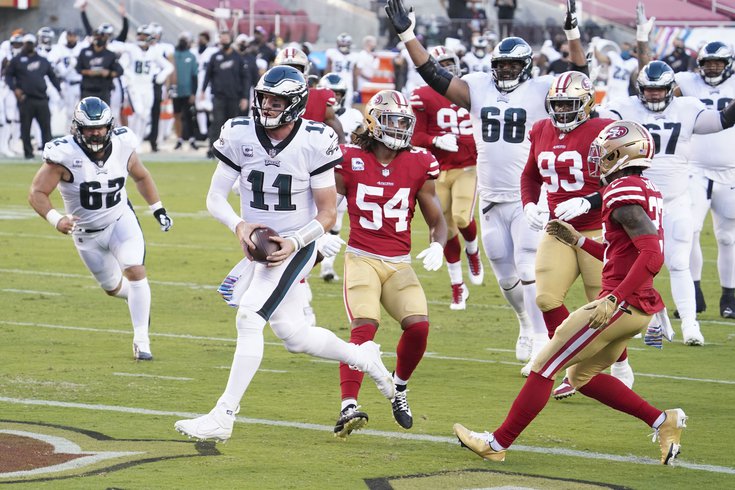 Travis Fulgham (this is the first time I have ever typed this man's name), may have saved the Eagles season Sunday night, catching an unbelievable deep bomb from Carson Wentz to help lift Philly to a 25-20 win in San Francisco.

WENTZ TO FULGHAM FOR A 42-YARD TD! #FlyEaglesFly

Filling in for, well, it’s unclear exactly but one of Jalen Reagor, DeSean Jackson, Alshon Jeffery, Marquise Goodwin or Dallas Goedert’s spot in the offense was practice squad player Fulgham, a sixth round pick by the Packers who ran a meager 4.58 40-yard dash at the combine.

The TD, which saw the Eagles find pay dirt in the fourth quarter, put the Eagles ahead 18-14 and was the go-ahead score. A pick-six a few plays later by another unknown — Alex Singleton — gave the Eagles some insurance. It was their third takeaway of the game.

The @Eagles defense extends their lead to 11. #FlyEaglesFly

The pair of big plays gave the desperate Birds their first win — and put them in first place in the NFC East.

You read that right.

Heading into Sunday, the Eagles were not only short-handed at nearly every single position, but the players that were on the field were a part of the team with the worst DVOA in the NFL. The defense had yet to force a turnover. They were 28th in scoring offense, 23rd in scoring defense and Carson Wentz was rated the worst starting quarterback in football, by QB rating.

It's not like the Eagles played a perfect game on Sunday. They almost blew it, giving the Niners offense almost two minutes to drive the field to steal the win away. Thank god San Francisco missed a two-point conversion.

How long will the Eagles hold their lead for the division?

Next week they will travel to Pittsburgh to face the well-rested Steelers, who had an unexpected COVID bye this week. The Ravens follow, before three straight NFC East games (and their bye in the middle).

Could they, actually win the division? The Cowboys have no defense, Washington has no real identity and the Giants have almost no hope. The Birds could theoretically, even with losses to playoff contenders in Pittsburgh and Baltimore, win their division games and control their own destiny.

Their injury luck would have to change. And Wentz would have to stop turning it over (he had another interception Sunday). And they should probably hand it off a little more to stud RB Miles Sanders — who had just 13 carries. But things got interesting, at least for a little bit, thanks to an unexpected win in the bay Sunday night.