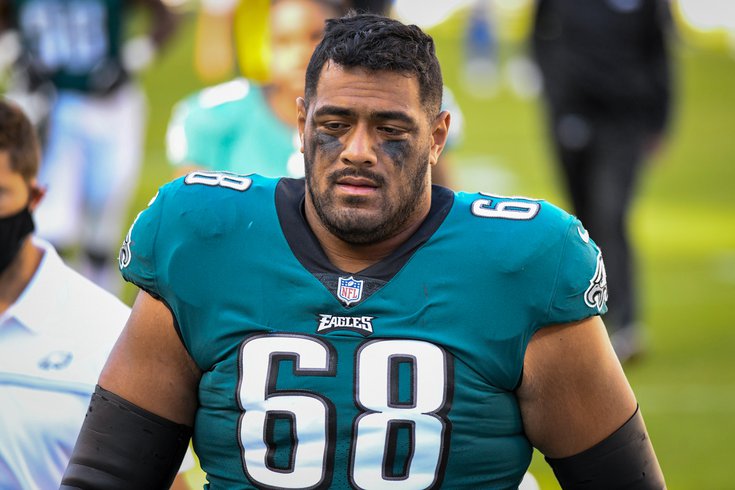 After a successful first start last Sunday against the 49ers, Jordan Mailata will have a difficult assignment this Sunday against budding star edge rusher Bud Dupree.

Now that the Philadelphia Eagles have picked up a win and sit atop the garbage NFC East, do we care against matchups for the next opponent? Yes? Sweet! So let's do that then. Here are five to watch against the Pittsburgh Steelers, a team favored by an entire touchdown, according to TheLines.com's consensus odds.

In his first ever start, in any game literally ever, Mailata played well, holding his own against the San Francisco 49ers, an impressive feat even if the Niners were down a slew of defensive ends.

It's going to get a whole lot harder next Sunday against Bud Dupree, an extremely athletic sixth-year player who is really coming into his own as a near-elite edge rusher in the NFL. First, his athletic measurables. Note that he is at least in the 96th percentile in the 40, the vertical jump, and the broad jump. This is as explosive an athlete as you'll find on the edge in the NFL, particularly for a 270-pound man.

Dupree doesn't have a wide assortment of pass rush moves. He primarily wins with his explosiveness around the edge. However, he would be smart to dust off an inside spin move against Mailata, who has struggled stopping that in training camp against Joe Ostman the last two years. Dupree does have an inside spin in his repertoire, but he doesn't use it often.

2) The Eagles' offense vs. their own distaste for possessing the football

The 2019 Steelers racked up 38 takeaways (20 INTs, 18 fumbles), which led the NFL. Actually, it was the highest total since the Panthers had 39 takeaways in 2015. Meanwhile, the Eagles are tied with the Cowboys for the most giveaways on the season, with nine (7 INT, 2 fumbles).

Above, we noted that Dupree had four forced fumbles in 2019. T.J. Watt had eight! Additionally, Joe Haden and Minkah Fitzpatrick each had five INTs in 2019. The Steelers get pressure, and when they force opposing quarterbacks into bad decisions, the guys on the back end have the ability to make you pay.

This is a game that is going to have to be won by the defense, and should not be a game in which Carson Wentz tries to play hero ball.

3) The Eagles' corners vs. the Steelers wide receivers

The Steelers have a deep group at wide receiver, and they like to spread the ball around. A look at their receiving leaders:

Against the Niners, Jalen Mills moved to CB from S to fill in for the injured Avonte Maddox. I like Mills at CB more than Maddox against this bigger group of outside receivers.

4) The Eagles' run defense vs. the Steelers' physical rushing attack

Under Jim Schwartz, the Eagles have traditionally done a nice job against those types of bigger backs. However, in 2020, particularly against the Rams and Niners, they have struggled against jet sweeps to wide receivers.

The Steelers don't often run it with anyone other than their backs, but when they do, they'll typically run those to Diontae Johnson.

Zach Banner beat out Okorafor for the Steelers' starting RT job in training camp, but then injured his knee Week 1, and is done for the season. Graham and Avery vs. Okorafor is a matchup the Eagles should win.

Graham leads the team with three sacks and five TFLs, while Avery had a sack and five(!) QB hits in just 16 snaps last Sunday night.

"That was sort of the breakout game we've been waiting for from him," Jim Schwartz said of Avery. "He's always been a skilled pass rusher. It's just fitting him in with all the other stuff. I think he's really done a good job of refining his technique and limiting his -- sticking with what works best for him.

"I think he had too big of a pass rush repertoire earlier in his career, and Coach Burke and Coach Wash have done a really good job of just sort of honing in on what works for him and he's starting to embrace that. He's certainly made a difference in this game. He was fresh when he came off the bench, which is a big thing for our guys that are coming off the bench, and he gave us that changeup and made some big plays for us in the game.

"His pressure led to the first interception, which I think was a huge play in that game, sort of maybe flies below the radar when the game is all said and done. They [the 49ers] were driving. They were in the red zone. We got that pressure, got that interception, and I think that that was a key turning point in that game."

Graham is a power rusher, while Avery is a guy who wins with speed and athleticism. That's a combination that can work, as it forces opposing right tackles to have to block both styles throughout the game. If the RT is ill-equipped against one style or another, the Eagles can exploit that weakness.