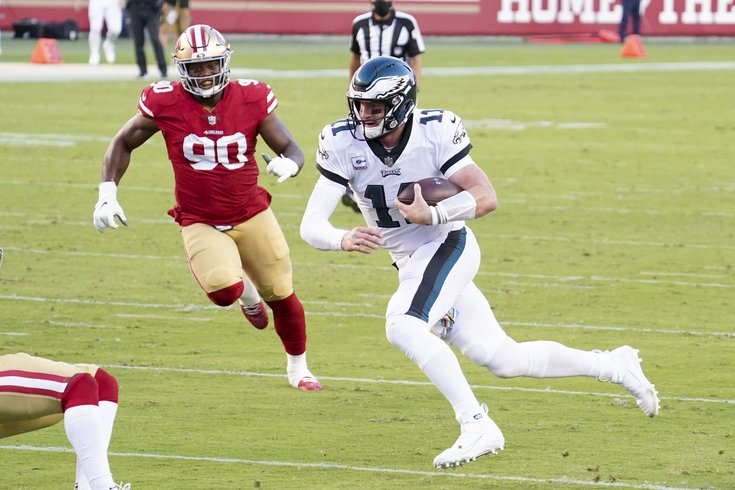 Here's where people around the country have the Eagles ranked after Week 4 of the regular season. Oh, and here's our version of these sellout rankings, too.

Where's the respect for the division-leading Birds? OK, they're not very good, but that's basically a requirement to play in the NFC East, which has a combined record of 3-12-1 through four weeks. The Cowboys can move the football, but their defense has allowed a league-high 146 points. Dallas doesn't deserve to be heavy favorites in anything right now, unless we're voting for most overhyped team of the past decade.

#JimmySays: Ooh, I like the gratuitous shot at the Cowboys there.

Carson Wentz's 42-yard touchdown strike to Travis Fulgham (who?) wiped away a night of frustration for the undermanned Eagles, who moved into first place in the woebegone NFC East with a 25-20 win over the 49ers on Sunday Night Football. Wentz got it done without his top four wide receivers, tight end Dallas Goedert, left tackle Jason Peters and -- for parts of the night -- right tackle Lane Johnson, who was in and out of the lineup with an ankle issue. Fulgham began the weekend on the Eagles' practice squad, while Alex Singleton -- the linebacker who plays primarily on special teams -- had the game-clinching pick-six on the ensuing series. If the Eagles turn their season around, this will be remembered as the flashpoint.

Injuries have decimated Philly again, which has meant a who’s who of who? starring for Philly again. Jordan Mailata, Alex Singleton and Travis Fulgham (?) all played huge roles in Sunday’s big road win.

#JimmySays: 15th is entirely too high.

#JimmySays: Is USA Today saying that if you win the turnover battle, you have a better chance of winning? I'm going to conduct a full-on investigation of this premise.

That the Philadelphia Eagles are in first place after notching their first win of 2020 in Week 4 says everything you need to know about the flaming bag of dog excrement that is the NFC East.

Credit where it's due—the Eagles notched their first win against an injury-ravaged San Francisco 49ers team, but it's not like Philly doesn't have issues in that regard. The wide receivers and offensive line have been decimated.

Thanks to gutsy play from quarterback Carson Wentz and some timely defense, the Eagles finally broke into the win column. The bigger problem is going to be building on that win. Over the next two weeks, the Eagles play at the 3-0 Pittsburgh Steelers and then host the 3-1 Baltimore Ravens.

It's going to take an admittedly unlikely win against one of those AFC North powers for us to start truly taking the Eagles seriously.

#JimmySays: I think "gutsy" is a good way to describe Wentz's game on Sunday, and I might even apply that to the Bengals game the week prior as well. Unfortunately, "gutsy" also means "taking on more hits as a result of running with the ball," and as we know by now, that won't be sustainable for long.

As stated here last week, Eagles coach Doug Pederson got heat for punting on fourth down in overtime of Week 3, but the tie was much-needed and will be important in the NFC East race all season. That unpopular decision could be the difference in the Eagles making the playoffs.

#JimmySays: No. Punting in that situation last week against the Bengals remains completely indefensible.

They are in first place. Can you believe it? They've been a disaster for most of this season, but winning at San Francisco was impressive for this beat-up team.

#JimmySays: Can I believe it? Yeah. It's basically what happened last year.